DURHAM, N.C. — EverGreen Linen Solutions is led by a management team of three women with more than 50 combined years of experience in the industry.

Haynes, EverGreen’s general manager, has worked in the linen industry for 17 years. Formerly regional co-workers with Haynes at Angelica, EverGreen CEO Jeff Hoffmann and COO Leon Johnson had a chance encounter with her in a hotel lobby in Raleigh years after last working together.

With plans to establish an EverGreen laundry in Durham, Hoffmann and Johnson invited Haynes to join EverGreen as the general manager.

“Minashia had never been a general manager, but that role needed a client-centric individual and that was right up her alley,” Hoffmann says. “She does a great job taking care of our employees and our clients.”

“If the people are taken care of, then the business is taken care of, and I think that’s what Jeff and Leon saw in me, that ability to lead,” shares Haynes. “For Rose, Sam and myself, that’s the culture we wanted to build.”

As Hoffmann and Johnson continued to build out their leadership team for the Durham plant, they invited Batista, another linen service industry veteran, to be plant manager, and DiGiulio, a new face in the industry, to be their office manager.

Even as women continue to make strides in the typically male-dominated linen industry, fully female management teams are an uncommon sight—especially having women of color, Haynes and Batista, in two out of these three roles.

The management at EverGreen’s plant importantly reflects the demographics of Durham, a city that celebrates diversity and inclusivity.

“Working in a women-managed office was something I felt was going to be somewhat magical,” says Haynes.

“One thing about this industry is it’s male-dominated, so I wanted to pride myself on establishing relationships with both (Sam and Rose). Being their general manager and having them work with me, I wanted Sam and Rose to know they were fully supported, and I was behind them 100 percent with any goals they had—personal or professional.”

“This just seemed like a perfect combination of hospitality and manufacturing,” she says. “It was actually quite funny because when I saw the posting, I just knew it was mine. I knew immediately—this was it.”

Batista has worked in the laundry industry for an impressive 34 years, 27 of those at Angelica where she spent almost two decades working alongside Hoffmann and Johnson.

She was asked to join the Durham management team as plant manager, and she relocated to Durham from Jacksonville, Florida.

“When Leon and Jeff asked me to join them as plant manager, I didn’t even think twice about it,” Batista says.

DiGiulio described how her working relationships with Batista and Haynes have developed to become much deeper than coworkers.

“The word that keeps coming to me is family,” she shares. “We’ll get together outside of work and just enjoy each other’s company. We value each other on a professional level but also on a personal level. We care about what’s going on in all our lives.”

Employing 360 people across North Carolina, Alabama and Florida, roughly half of EverGreen’s workforce is women.

According to McKinsey & Company, based on 2020 statistics on the leadership gap, “For every 100 men who were promoted to a managerial role, only 85 women advanced to the same position. This gap is even greater for women of color as only 71 Latinas, and 58 Black women received a promotion.”

Representation and visibility across all industries are more important than ever. For Haynes, a Black woman, and Batista, a Latina woman, holding senior management positions continue to pave the way for normalizing women, especially women of color, in similar roles now and in the future.

“What message does it send when all you do is bring in male management? Elevating women leaders inspires our workforce,” says Johnson.

“They see we believe in Rose, Minashia and Sam, and I think it has helped us be a better business because of it.”

Early in Batista’s career, Johnson suggested she try out an operations role and introduced her to Rosario, a woman working in California as a general manager of two laundry plants.

“I said, ‘Operations? I’ve never seen a woman running a laundry,’ and Leon said, ‘Oh, yes, they do,’” says Batista.

“So I met Rosario and realized I could do it, too. That’s how I decided to start that role.”

When Hoffmann and Johnson hired for these leadership roles, Haynes, DiGuilio and Batista were chosen because they were the best people to do the job.

“Simply put, they were the most qualified individuals for the role,” Johnson points out.

“We wanted free thinkers, people who would think differently. We wanted people to expect more, to expect better. And those three individuals are Rose, Sam and Minashia.” 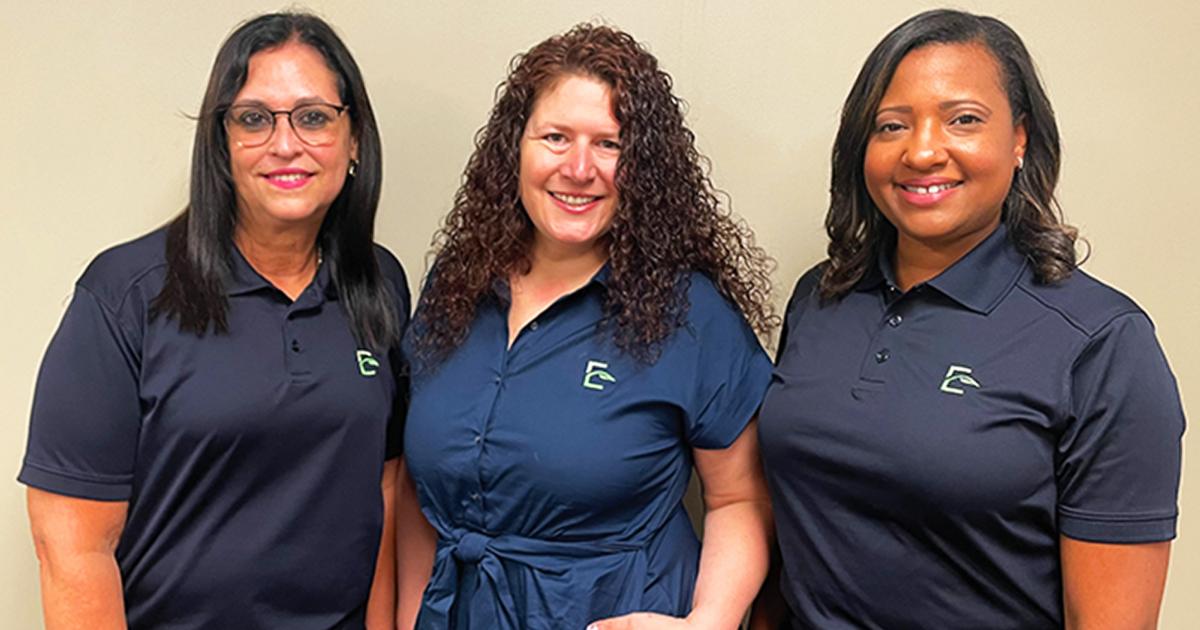