BEACON FALLS, Conn. — Marathon runners train their bodies relentlessly, running hundreds of miles to prepare themselves for a race. They do it to build endurance so they can overcome any conditions, stave off fatigue and finish with a strong sprint to the finish line.

Four years after beginning the process, LAVATEC had only 10 days to remove the old machinery and install an entirely new system that centered around a custom-built continuous tunnel washer. The company completed it in eight, and SOLS is on the road to achieving its energy efficiency goals.

“For the capacity we handle daily, we’re now able to process everything in less than 10 hours a day compared to 14-18 hours previously,” explains Antonio Casillas, Southern Oregon Linen Service’s general manager. He’s been with SOLS for the last eight years.

Casillas’s statement is significant and relevant to the challenges SOLS has encountered.

Four years is hardly a normal process but climate change has caused a shift away from what is considered normal in the western United States. The company took stock of the needs of its customers, where the industry is heading and regional business and environmental conditions before making its decision after thorough consideration.

Water and energy conservation has taken on a new meaning and here’s why. SOLS is in White City, about 35 miles north of the California border and close to I-5, the major north-south interstate that runs through the states bordering the Pacific Ocean.

A provider of cooperative laundry services for nine Oregon hospitals and one assisted living facility within a 300-mile radius, its 30,000 square-foot facility first opened for business in 1996. With 70 full-time employees, it makes it one of the largest local employers in the town of fewer than 10,000 people.

A few weeks before the LAVATEC equipment arrived at SOLS, the governor of Oregon declared a drought emergency in several counties including Jackson, where White City is located.

More than 70% of the county is experiencing extreme conditions, and forecasters are predicting the prolonged drought to be worse than in the last two years. Local farmers delayed planting due to the lower water storage and snowpack levels, and there are huge concerns again since the fire season officially arrived on June 1.

When it became apparent last year that it was time to replace their existing tunnel system, LAVATEC was one of three vendors invited to submit proposals.

“We never had any LAVATEC equipment, but after four years of working with them and understanding the benefits of their system, it was evident they were our choice,” said Casillas.

“LAVATEC is now part of the Southern Oregon Linen Services family, and we look forward to future projects with them.”

In addition to the new LT60 continuous tunnel washing system with 14 compartments, SOLS added an LP572 40-bar press, six TT-745 dryers with a capacity of 292 pounds each and a Shuttle system.

To keep up with the demands of a two-shift, five days a week work schedule, Casillas outsourced work to several area laundries until the conversion was completed.

“LAVATEC did a phenomenal job completing the project in eight days. I would like to genuinely thank everyone involved with the installation team for all the support, especially Pacific Machinery Moving,” Casillas says, referring to the California company Slatcher brought in to handle the rigging for the project.

“In my opinion, Hector Gutierrez has put together the best rigging company in the industry.”

Certifiably, Casillas and his staff know they are working with highly energy-efficient washing equipment.

The simplicity of the LT-60 tunnel washer gets the ball rolling, delivering superior performance with maximum throughput. With the capability of over 100 wash programs, it allows SOLS to select, monitor and control all inputs and levels of energy, water and chemicals to do the work.

Casillas is also impressed with the TT-745 dryers. Equipped with an in-line burner, these machines provide total basket coverage that evenly distributes heat throughout the drum.

“The equipment has definitely lived up to our expectations. After the installation, we had a few minor issues as expected, and the LAVATEC team promptly took care of it,” Casillas shares.

“Having six dryers has kept our steam line flowing consistently. The infrared sensors work very efficiently and help keep the flow of work moving quickly. When you combine the extraction press and shuttle, the whole system has helped us to run more efficiently.”

Casillas indicates another important factor with the new equipment is it’s designed to take Southern Oregon Linen Service to the next level.

“We have been producing over 8 million pounds of linen consistently,” he says. “We expect to see growth in our business and process about 9 million pounds in 2023. As we continue to expand, we hope to add additional equipment.” 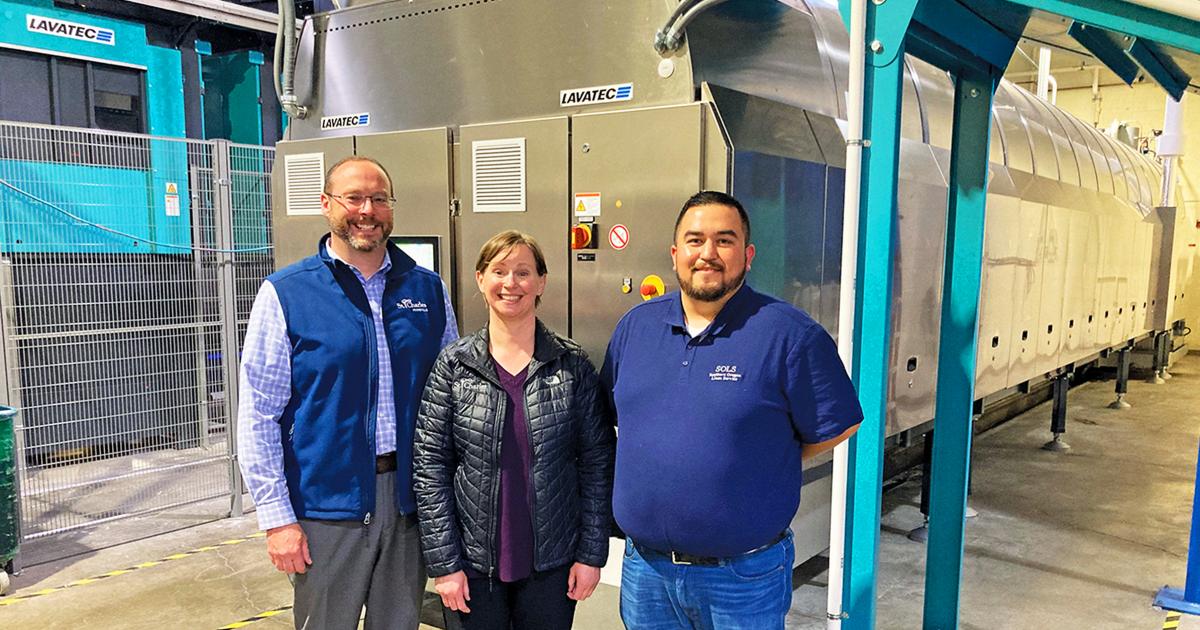