Yes, it is a bird, but when discussing the economy, a black swan is an unpredictable or unforeseen event that has extreme, usually negative, consequences.

“This was a concept that was created by an economist about 25 years ago to explain why we were wrong,” says Chris Kuehl, Ph.D., managing partner and co-founder of Armada Corporate Intelligence, which provides services in corporate intelligence gathering, economic forecasting and strategy development.

The past two-and-a-half years have been littered with black swan events, such as the Ukraine invasion. Before that was everything that took place because of the pandemic.

So, what can laundry operators expect from the economy in the coming year? Kuehl examined several factors to cautiously look ahead during the general session “Now What? Expectations for 2022 and Beyond” at the recent Clean Show in Atlanta.

Kuehl says that the economy is returning to normal GDP growth—2.5% instead of 6%.

“So, even though it’s coming down, it’s not coming down precipitously at this stage,” he points out. “The predictions for next year are still 2.5 to 3% GDP growth.”

Inflation is also supposed to moderate, according to Kuehl. Inflation is being driven by oil prices and the supply chain.

“The weird thing is that either one of those could end literally overnight,” he says. “If for some reason we decided to reduce the sanctions on Russia enough that they could start selling their oil again, there is no oil crisis.

“The U.S. is the world’s largest oil producer. We account for about 15.7% of all the crude oil globally. Russia is number two at about 13%. Saudi Arabia is number three at about 12. So the three of us are the biggest oil producers. And as a result, what we decide to do makes a great deal of difference along with what OPEC decides to do.”

“Unemployment is probably not going to change much,” he shares. “We have 11 million jobs still available. We have maybe 6 million people capable of taking them.

“You are desperately trying to find workers and it gets harder and harder. Minimum wage goes up. Demand goes up. It’s hard.”

When it comes to interest rates, Kuehl says there will likely not be a lot more rate activity.

“So if the inflation is coming out of oil and gas, if it’s coming out of supply chain, you can mess with the interest rates until you’re blue in the face, and it doesn’t do any good.”

Still, the Federal Reserve does not think that the economy is heading for a recession, Kuehl points out, and a lot of analysts don’t because too many factors still point toward growth.

“Definitely a downturn, definitely slower than we’ve seen in the last couple of years, at least the last year, but not actually tipping into recession,” he says. “And even if we do, this country never actually has a 100% recession.

“We get sector recessions. One part of the economy does badly. Another part does poorly or better or really good.

“We’re still seeing a lot of growth in construction, which is a big part of the economy. New home sales data has begun to decline, but only on the single-family—multifamily is still growing. It’s still growing at about a 10% rate.”

One factor that Kuehl sees as reassuring is that 90% of the people who were doing business in China are actively looking for someplace else to produce.

“A lot of that will be elsewhere in Asia,” he shares. “But they’re also moving back to the U.S. There’s been $1 trillion worth of reshoring already this year, and probably another trillion by the end of the year.”

Kuehl’s presentation covered many factors and details and events that will or could affect the economy, but what most want to know is what, as best can be determined, is going to happen.

Armada has an industrial production index that was designed by a retired lieutenant colonel who used to be in the artillery, in which accuracy is essential.

“So we’re definitely seeing we’ve reached the peak,” shares Kuehl. “We’re now in a decline, but by the second quarter of next year, it turns and it starts to go back up again.

“And a lot of the peak were companies buying machines trying to respond to the supply-chain crisis. They bought them and now they’re sort of integrating them into the system, and they don’t start buying them again until second quarter of next year.

“I’m kind of leaning toward things getting more positive after probably another quarter or so of not great news, but then it starts to turn. We’ll spend a lot of time looking at retail this year because that generally is what drives the last quarter of the year.”

To read the beginning of Kuehl’s look into the current state of business in Part 1, click here. 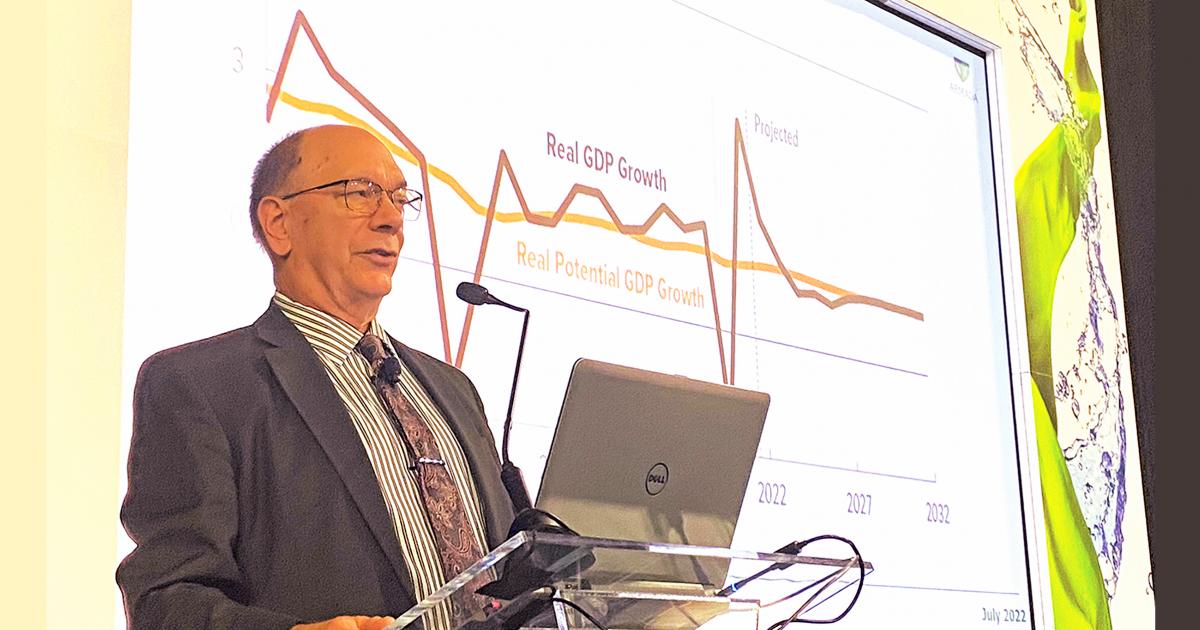