BEACON FALLS, Conn. — The state of California is famous for many things, especially its tourism, motion picture and television industries.

It’s also known as the leader for energy conservation in the United States, which is certain to continue as an important consideration for many industries this decade and in the future.

Emerald Textiles, recognized as the largest commercial healthcare laundry and linen service business in the Western part of the country with headquarters in San Diego, raised its conservation standards years ago.

Formed as an environmentally responsible healthcare laundry provider, each equipment purchase decision is based on the strict California regulations and what’s best for their customers.

Due to the growing demand and need for energy efficiency improvements at the Commerce commercial linen and laundry facility in Los Angeles, one of the capital investments Emerald made as part of a multi-million dollar commitment was the purchase of a new continuous batch washer system (CBW).

Emerald had first installed a LAVATEC CBW system in 2019 that exceeded all expectations. Consequently, they also have invested in a new rail and conveyor system that is scheduled for installation this summer. It will be the next phase to help the facility nearly double its volume in 2022.

“These LAVATEC CBW systems are right there with the most energy-efficient tunnel systems on the market,” explains Sean Mageean, the Commerce facility’s general manager.

“Energy savings is very important to us. We do our part to preserve natural resources by regularly investing in energy and water-saving equipment so our healthcare customers can feel good about choosing Emerald Textiles.”

Timing of the new equipment and increased volume projections coincide with a Dec. 4 announcement that Emerald Textiles had acquired the West Coast assets of Angelica Corp., a national healthcare linen service provider.

The acquisition included nine facilities, allowing Emerald to expand its Western footprint into Phoenix and Las Vegas and strengthen its Northern and Southern California markets.

“We are focused on building out our strong network of customers and expanding our footprint of facilities while investing $35 million in capital across our locations to create world-class linen and commercial laundry facilities in the West,” says Andy Kratky, Emerald Textile’s CEO.

“At the Commerce facility, we have welcomed several newly won healthcare customers that is the primary growth for 2022, along with 100% renewals of linen services to all our acute hospitals and medical centers.”

The plant in Commerce is one of the oldest in Emerald’s portfolio. Located in a business park, the 70,000-square-foot building opened in 1950. But the energy crisis in the early 1970s would lead to new regulations for businesses in the state.

The California Energy Commission was created, and in 1978, it adopted stringent energy efficiency standards requiring businesses to decrease the energy intensity and carbon emissions of their equipment and buildings.

Emerald has championed those efforts and it led to their San Diego facility winning a Savings by Design Award in 2011, which is sponsored by the California Public Utilities Commission and San Diego Gas & Electric.

In 2020, the Commerce facility was recognized by the Los Angeles County Sanitation District for converting waste into resources by reducing the amount of wastewater.

It’s the second time in the last three years they have chosen LAVATEC.

“In 2019, we purchased a LAVATEC CBW system to replace one that had reached the end of its useful life,” says Mageean, who has worked in the linen and garment service industry for 26 years. He’s been with Emerald for the last three.

“The system installed then included a new loading conveyor, a 12 module, 200-pound pocket CBW, 50-bar press extractor, shuttle system and five dryers. This new system replaced another and compliments the other. Price, dependability and support were all factored into the decision to go with the LAVATEC systems in our facility.”

Mageean indicates his facility is ready to take on a greater workload after the announcement of the new acquisitions was made in December 2021.

“The expectation is that, at a minimum, the new LAVATEC CBW system will handle approximately 50,000 pounds wash capacity per shift,” he says. “With the addition of 15 new client hospitals, our plant has transitioned to a two-shift, seven days a week schedule.”

Jim Hernandez, Emerald’s director of engineering who oversees all major projects, handled this installation with Luis Lopez, the chief engineer in Commerce. Mageean says both men and Jim Slatcher, LAVATEC’s Western regional sales manager, were responsible for a seamless transition.

“The new CBW system has allowed us to increase our overall throughput so we are processing more poundage in a shorter amount of time,” Mageean notes. “The used TT745 dryers run two shifts, seven days a week, along with five more LAVATEC dryers we have and eight others. They were available to be shipped fast and are doing well for their age.

“Since replacing the older, inefficient systems, we are experiencing resource savings with water and steam. Running more poundage in a shorter amount of time is also good for our people and the environment, and great for our bottom line.”

Mageean says the controls upgrade and discharge conveyor system will help him manage operations at the facility.

“As with most businesses, we have experienced some trouble finding qualified workers. Washroom and dryer operator positions, which require some level of technical skill, have been particularly difficult to maintain,” acknowledges Mageean, who has 209 employees working at the Commerce plant.

“The addition of discharge conveyors and their corresponding controllers will allow for the reduction of some of these workstations and increase the ease of work overall for our employees.”

Having LAVATEC’s support available anytime to maximize production uptime now that operations have expanded to the two, eight-hour shifts everyday schedule is reassuring to Mageean.

“Our overall impression is the new CBW system is running great and exceeding our expectations,” he says. “The LAVATEC team was here onsite throughout the entire installation, and again during the training phase once the system was up and running.

“I know if any issues arise that require support beyond our local engineering team, LAVATEC staff can connect to the system remotely and assist our engineers.” 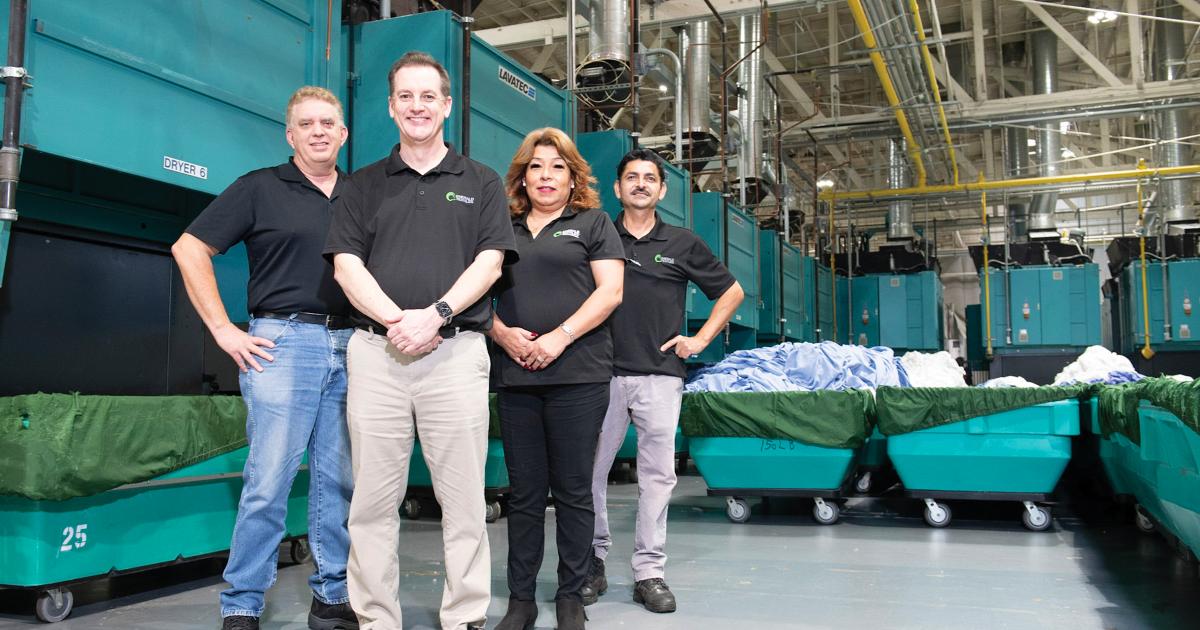