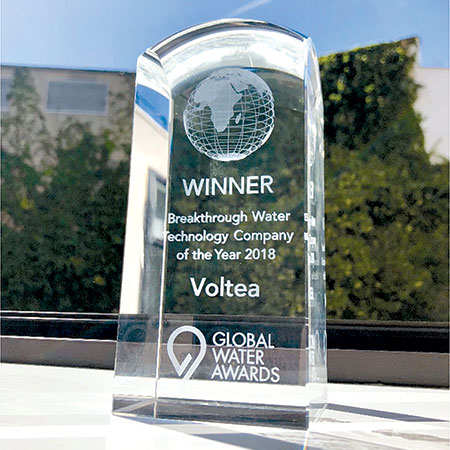 The awards, which recognize companies that make a significant contribution to the worldwide water industry, were part of GWI’s Global Water Summit. GWI cited Voltea’s “successful commercialization of its CapDI©technology” as a key factor in earning the award.

“2017 saw Voltea’s capacitive deionization (CapDI) technology take off as one of the most successful alternatives to reverse osmosis in recent years,” GWI says. “It gained significant market traction in the industrial and commercial sectors, with over 100 systems being shipped. The company also closed a $10 million funding round to further accelerate its growth, and brought the full capacity of its robotic module assembly plant in Dallas online.”

Voltea says its industrial and commercial CapDI© systems (which can be used in commercial laundry operations) run with patented CapDI technology, which monitors incoming water quality in real time, and self-adjusts performance to ensure it delivers consistent, precise water quality.

“We’re extremely grateful to be recognized by GWI for our disruptive technology, which has transformed the way many industries treat water,” says Voltea CEO Bryan Brister. “Our salt-free, chemical-free technology is being used by some of the top companies in the world for a variety of uses, from cooling towers to point-of-use water treatment for coffee and fountain drinks.”

CapDI technology is a simple, two-step process wherein water flows between electrodes. The electrode surfaces are separated from the water by ion-selective membranes that allow positive or negative ions (salts) to pass. The system is tunable, allowing adjustable salt removal and continually adjusts to account for any fluctuations in feed water characteristics.

The winners of the GWI awards were chosen by GWI subscribers and Global Water Summit delegates.

“Voltea brings a compelling value proposition to clients who have traditionally favored RO, particularly given the need for less pretreatment and no remineralization,” says GWI.

Voltea, which opened its production facility in the Dallas area about 18 months ago, says it has about 30 local employees and continues to grow.