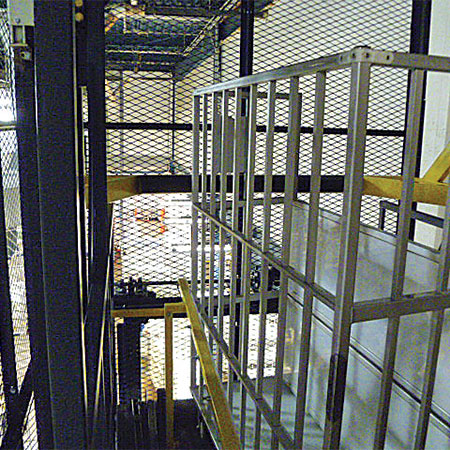 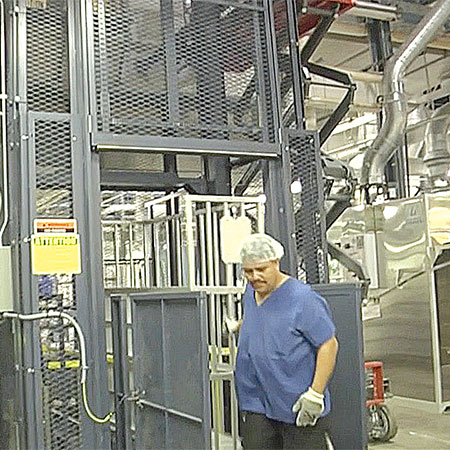 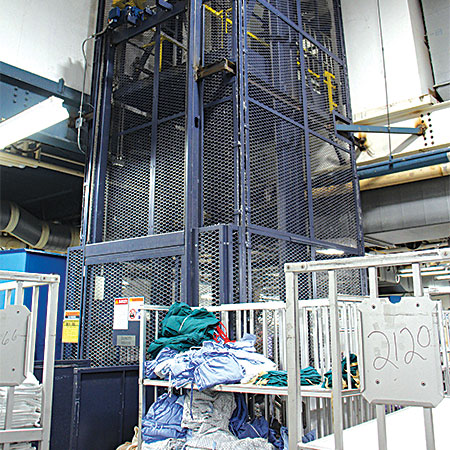 The plant is built into the side of a small hill, with loading docks on both the first and second levels. Laundry arrives and is sorted on the second level and is then transported to the first floor, where it is washed, processed and ultimately loaded on trucks to be taken back to the various hospitals.

When soiled laundry arrives, it is taken off the carts, and the carts are lined up to be cleaned and disinfected in the washer. The sterilized carts eventually need to be reloaded with clean laundry for transport back to the hospitals, so a system had to be developed to lower the carts to the first floor.

Creating and installing that system at Madison United was among the most unique projects for Automation Dynamics of Independence, Mo., which makes automated equipment for the commercial laundry market.

Although Automation Dynamics’ primary products sort, count, weigh and route laundry through the wash process, it also makes automatic washers that clean and sterilize the carts on which laundry is transported to and from wash facilities.

“This is the first laundry facility where we installed a cart washer that delivers disinfected carts to an elevator,” says David Jewell, the Automation Dynamics customer service director who worked closely on the project. “We saw that Madison United used a PFlow vertical lift to move finished laundry down for shipping, so we approached them to see if a lift could be designed to work with the cart washer.”

Lowering laundry carts 14 feet, 8 inches from the second floor to the first floor is a routine application for a PFlow Industries Inc. vertical lift. Still, several unique challenges had to be addressed in designing it.

Limited space between the cart wash discharge area and the placement of the lift required that the carts had to be automatically loaded on the lift.

The lift had to accommodate multiple sizes and types of carts, some stainless-steel varieties weighing 350 pounds, and some made of aluminum or plastic, which is considerably lighter. Also, the lift has high-cycle use, completing, on average, 260 trips per day.

The cycling of the system, which is initiated by the downward movement of the cart-loaded lift, is highly coordinated. A chain conveyor, similar to a car wash, hooks on to the wheels of a cart and pulls it through the washer.

Once washed, the cart exits the washer and slides down an incline onto the lift platform through an open gate. An electric eye senses that the cart is securely in place and automatically closes the upper-level gate and sends the lift down. Parallel bumpers attached to the lift platform hold the cart in place while traveling down. The bumpers are designed to firmly hold the various cart models and sizes.

When at the lower level, the lift door opens automatically, but the cart sits on the platform until it is manually removed by an operator. Once the cart is removed, the operator presses a button to close the gate and send the empty lift back up to retrieve another cart.

When the lift arrives back to the upper level, an electric eye senses the vertical reciprocating conveyor (VRC) is empty, prompting the wash conveyor to release the next cart down the incline and onto the lift platform, starting another cycle. The integrated controls hold the chain-driven conveyor from pulling a new cart into the wash until the most recently washed cart is securely on the lift and on its way down.

“The timing sequence of everything is excellent,” says Brad Bennett, chief engineer at Madison United. “By the time the lift comes back up, the next cart is ready to come out of the wash and into the lift. And if the lift isn’t unloaded for a few minutes at the bottom, the cart wash also stops, eliminating any potential backups.”

In addition to standard safety measures such as interlocked gates and enclosures, the Madison United lift features a carriage-operated safety barrier at the upper level to stop carts if the lift is not present.

On the lower level, a buzzer and light indicate that the lift is down and ready to be unloaded. The alerts remain in effect until the operator removes the cart, shuts the gate and hits a “clear” button.

“The PFlow machine works beautifully. The customer loves it, and we love it,” says Jewell. “We would definitely use PFlow again for a similar application.”

The other PFlow lift at Madison United is a hydraulic model installed in 1995 to move finished laundry and supplies between the two levels. It remains in peak operating condition.

Alex Miller of AE Miller Group has been writing about innovative industrial technology for more than 25 years, with a special emphasis on heavy equipment and automation installations that help companies improve their productivity and operational performance.