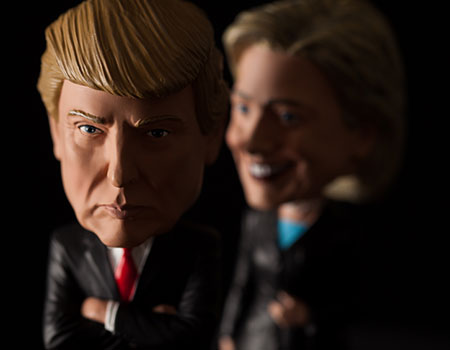 CHICAGO — Donald Trump would be elected the 45th president of the United States if only institutional/industrial laundry operators voted today. That’s the result of a Special Election Survey conducted by American Laundry News.

Nearly 80% of respondents indicated that they will be voting for the Republican ticket of Trump and Mike Pence today. Just over 20% said they will vote for Democrats Hillary Clinton and Tim Kaine.

Third-party tickets (Green and Libertarian) garnered support from less than 1% of respondents each. Nearly 3% of respondents remain undecided, and close to 2% indicate that they would not be voting this year.

Trump’s support in the institutional/industrial laundry sector has gone up from a similar survey conducted by American Laundry News in August. At that time, only 57% of respondents favored the Republican ticket.

“Neither Hillary nor Trump have the class necessary to represent the office of president,” writes one respondent. “However, I believe a vote for Trump is a vote to return the U.S. to world-leading status.”

That response came to the question, “In light of how the presidential candidates have conducted themselves, how do you feel about our country right now?”

Some who answered the question feel the country is all right, but elected officials are questionable.

One respondent writes, “Great country, terrible leadership. The two parties have ruined politics in this country, fanning the flames of the far right and far left—where is the compromise?”

“Our country is fine,” writes another. “The candidates are horrible representatives of the United States of America.”

One respondent puts the state of the country this way: “Regardless of the individuals running for office, the United States Constitution is what makes this country great. Not all of the founding fathers agreed, and some were just as brutal toward each other regarding their views. However, I am voting for the individual who has our country’s best interest at heart for all people regardless of party affiliation.”

Other laundry operators who responded to the question weren’t so optimistic about the condition of the United States.

“Very sad, the underlining prejudices of the American people have really come out,” writes one respondent. “It seems they have forgotten what America is all about.”

Writes another, “We are in deep trouble. This is what we have to choose from?”

Some respondents are quite concerned about the state of the nation. As one writes, “I am very scared for my children's future.”

Still, some glimmers of hope shine through in some answers.

“Sad,” a respondent states bluntly. “But we shall survive and do better in the future.”

The top issue influencing respondents’ votes this year is the economy (37%). That is followed by homeland security at 12%, healthcare (10%) and gun control (6%).

Other issues mentioned by respondents include Supreme Court appointments and government corruption.

While the Special Election Survey presents a snapshot of readers’ viewpoints at a particular moment, it should not be considered scientific. Due to rounding, percentages may not add up to 100%.