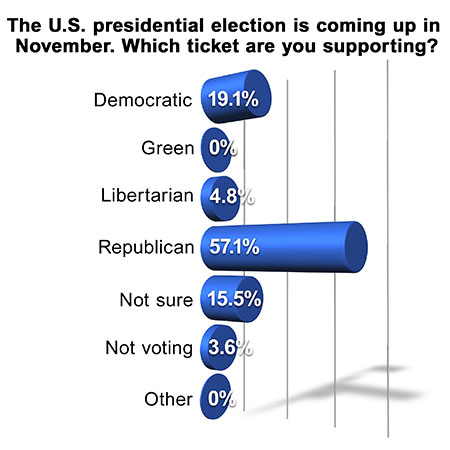 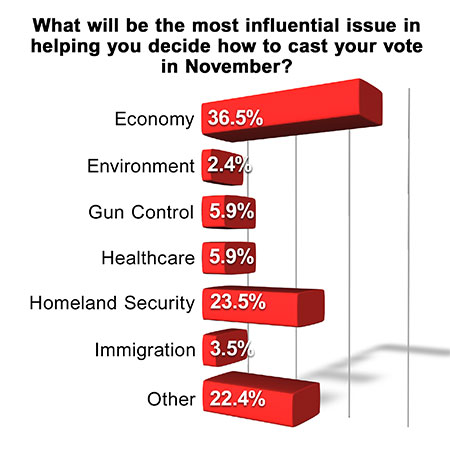 National races and political issues top of mind for respondents

CHICAGO — With the 2016 elections coming up in November, American Laundry News decided to ask readers about the election and important issues in its most recent Your Views survey.

The result? The majority of respondents favor the Republican party in the upcoming election.

When asked which ticket they would be voting for, 57.1% selected Republicans Donald Trump and Mike Pence. The Democratic candidates, Hillary Clinton and Tim Kaine, trailed by double digits, with 19.1% of respondents indicating they would vote for the ticket.

The only other party that respondents indicated they would vote for was the Libertarian ticket of Gary Johnson and Bill Weld, at 4.8%.

However, 15.5% of respondents indicated they weren’t sure who they would vote for, while 3.6% said they wouldn’t be voting.

“I’ll vote for the most moral of the two, which doesn't look too good right now,” a respondent writes.

“I will not vote for a lunatic,” writes another.

Finally, one laundry manager writes bluntly, “I refuse to vote for either idiot running.”

Respondents continued favoring the Republican party when asked, “Which ticket do you think will more likely be a positive influence for the laundry/linen industry?” Nearly 70% indicated the Republicans would be better for the industry; 14.3% selected the Democrats. More than 20% selected “not sure” when asked.

That isn’t to say all laundry managers believe political parties can influence the industry, either positively or negatively.

“The parties will have no influence on the laundry industry,” writes a respondent.

State and local races were selected by 16.9% and 8.4% of respondents, respectively.

Another writes, “State, in the short term, but president in the long term.”

The issues that respondents see affecting the laundry and linen business are mostly national with a few on a state/local scale.

“Washington state has one of the highest tax rates in the U.S., and we also pay a lot at the (gas) pump,” one respondent writes. “Our hospital/long-term care laundry is set in a rural area and some of my employees drive a long distance to work. Additionally, whenever gas prices go up, the price of our products usually inflates to cover the cost of shipping it.”

Another laundry manager writes, “The state of Illinois and the fact that the legislature has been controlled by the same party with the same man in charge of the state senate has destroyed the economy of the state.”

“We need to find green solutions for laundry,” according to another respondent. “Water recapture, economical drying, less chemicals, etc. and grants to help companies switch over like they did for the car industry with their cash for clunkers program.”

On a national level, immigration is a concern for respondents, along with the issue of minimum wage.

“The laundry industry needs to make sure that we have employees to do the linen processing,” one writes. “Unfortunately, we depend very much on immigration to provide these employees.”

“The minimum wage raise that everyone is proposing would have a significant impact on our industry,” writes a respondent.

Those who took the survey pointed to several issues that would be “most influential” in helping to decide how they would vote in November. The top issues: the economy (36.5%) and homeland security (23.5%). Further down the list were gun control and healthcare at 5.9% each, followed by immigration (3.5%) and the environment (2.4%).

That list of issues is by no means comprehensive, as respondents indicated when asked to share other influential issues.

Another writes, “Equal pay for women, and pro-choice.”

“Stop overregulation,” a respondent writes, and another agrees: “Reducing or undoing government regulation.”

And another survey taker indicates that foreign policy will be influential in their vote.

Whatever the result of the presidential election, some survey respondents aren’t too impressed with the political landscape of the country.

“It's a sad day in this country,” a respondent writes. “We have two known liars to vote for and people just accept that. We hear the same rubbish every election year and people just accept the fact that they are being lied to because their favorite candidate stands for a certain ‘right’ or against a certain ‘wrong.’ I say fire the whole bunch and start over from scratch. It won’t happen, though, because we have a public that does and believes whatever the TV says and can't think for themselves. There is no hope for this country no matter who gets elected.”

Another hopes for the best: “We need to reach out to each other to accomplish what is best for the country.”

Subscribers to American Laundry News e-mails are invited to take a quarterly industry survey anonymously online. All managers and administrators of institutional/OPL, cooperative, commercial and industrial laundries are encouraged to participate, as a greater number of responses will help to better define operator opinions and identify industry trends.