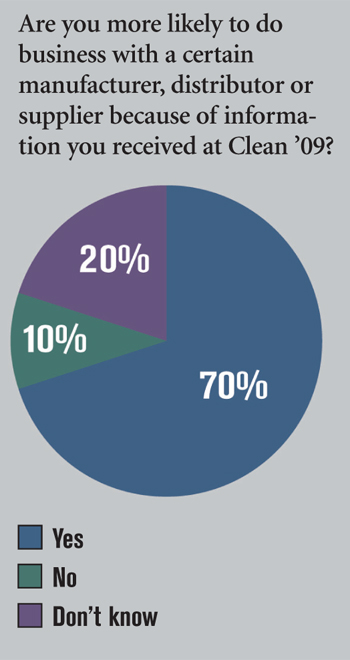 CHICAGO — Nearly 91% of respondents to July’s unscientific Wire survey said they attended Clean ’09 in New Orleans, and nearly 70% of them reported being “fully satisfied” or “somewhat satisfied” with their experience as a whole.
These attendees sought information about a variety of products and services. Finishing equipment (70%), washers/extractors (65%), feeders/folders (62.5%), chemicals/detergents/dispensers (57.5%), carts (55%), and linen (55%) garnered the most attention. Respondent interest in other products/services ranged from 7.5% to 52.5%.
Seventy percent of respondents said they are more likely to do business with a certain manufacturer, distributor or supplier because of their trip to Clean. Ten percent said they aren’t, and 20% are unsure.
Most respondents attended Clean on Friday (90.5%) and Thursday (83.3%). The percentage started to decline by Saturday (71.4%), and just 31% of respondents attended on Sunday, the final day.
Respondents were asked to rank several aspects of the show, with 1 representing “fully dissatisfied” and 10 representing “fully satisfied.” Ease in locating event information earned the best mark, with a 7.9 rating average. Options for after-hours activities (7.6) and quantity of exhibitors (7.53) were next highest. Networking opportunities, hotel accommodations, convention center, quality of exhibitors and transportation options earned marks ranging from 7.45 to 7.21. The only category receiving an average score below 7 was educational sessions at 6.32.
Clean’s sponsors presented 43 hours of educational sessions, including several offered by international trade associations. Approximately 57% of Wire respondents said they didn’t attend a session this year, while roughly 17% reported attending four or more sessions and another 11.9% said they sat in on three. The remainder attended either one or two.
Respondents who didn’t attend Clean most often cited budgetary concerns as the reason. Smaller percentages said they had no interest in attending, someone else on staff made the trip, or a medical issue prevented it.
Las Vegas will host Clean 2011. Nearly 85% said they plan to attend that show and/or send someone from their staff, while approximately 2% said they aren’t. The remaining 13.3% are undecided.
While the American Laundry News Wire survey presents a snapshot of readers’ viewpoints at a particular moment, it should not be considered scientific.
Subscribers to American Laundry News’ Wire e-mails — distributed weekly — are invited to participate in an industry survey each month. The survey is conducted online via a partner website. Each survey is developed so it can be completed in 10 minutes or less. Readers are encouraged to participate, as a greater number of responses will help to better define operator opinions and industry trends.
Click here and follow the menu instructions to sign up for the free e-mail service.