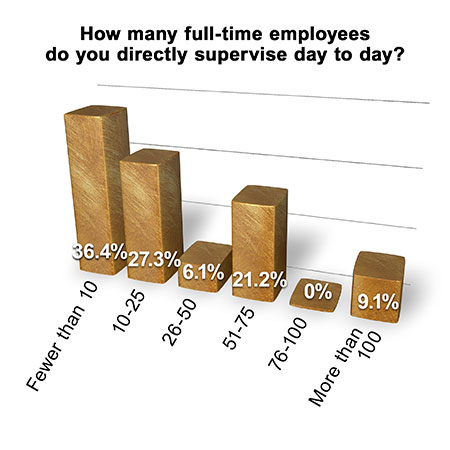 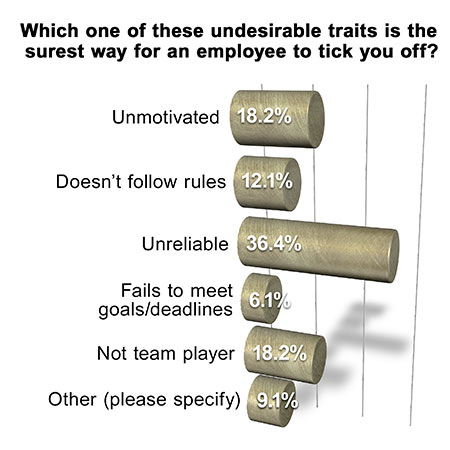 The majority of those responding to this quarter’s survey (56.3%) indicated that their job title falls under laundry management. General administration was selected 12.5% of the time. Environmental services, purchasing and housekeeping were each selected by 3.1% of respondents.

The remaining 21.9% indicated that their job titles fell under a variety of different categories.

Just over 9% of survey respondents manage more than 100 laundry workers, while 6.1% supervise 26-50 employees.

No respondents indicated that they supervised 76-100 workers.

When it came to indicating a trait that respondents value most in those employees they supervise, the top vote-getter was dependability at 43.8%.

Seeing that dependability was the trait most valued by survey respondents, it follows that the trait most likely to “tick off” a manager is being unreliable. More than 36% of those taking the survey have problems with that trait.

Respondents also take issue with those who aren’t team players or are unmotivated. Both of those answers were selected by 18.2% of respondents. Those were followed by being irritated by employees who don’t follow the rules (12.1%) and fail to meet goals and deadlines (6.1%).

Many laundry managers and supervisors who took the survey indicate that they have some common, or more difficult, issues to address with their employees.

“There was a sexual harassment complaint against a driver,” shares a respondent. “Both parties were guilty of inappropriate behavior but only one was my employee. The employee underwent a documented coaching session.”

“There is a noticeable line drawn between employees from different countries,” a respondent writes. “This strains the team player model, and I have to stress professionalism in order to maintain a cohesion within the crew. No one has let me down, but I deal with the atmosphere constantly.”

“Egos tend to get in the way of teamwork and productivity at times,” writes another. “I have the most trouble with staff who go out of their way to quietly undermine and borderline sabotage coworkers. It can be very difficult to ‘catch,’ and it can spread through the department quickly.

“In my experience, it tends to start with that one employee who believes they are above learning new things or refuse to learn new processes, and occasionally there are those whose sense of entitlement gives them the idea that they are above certain duties or tasks.”

One respondent writes about handling a procedural issue: “Having staff use the correct program for washing and/or drying has been a challenge (i.e., using high heat for table linen). Table linen is more apt to wrinkle, so I made staff rewash and re-dry using correct cycles.”

Sometimes, if employee behavior or performance doesn’t improve, termination is the correct solution: “I had a hard-working, dependable employee caught on camera stealing tools. I had to terminate the employee.”

“I had an employee who called in sick every Monday after football on Sunday. I fired the employee,” writes another respondent.

Almost 70% of respondents indicated that they received some sort of formal management training before taking a supervisory role in the company, while 30% didn’t have any formal training.

Laundry managers who took the survey indicate several areas for training that would help in their current positions. Some of the areas of management respondents would like formal training in include how to be more assertive, interpersonal skills and stress management.

Another writes, “I’d like to learn how to turn an employee with attitude issues into a productive, positive employee.”

“I’m not aware of any training to address indifference,” writes another respondent.

Other topics survey takers want to learn more about are of a more legal nature: unemployment laws, the Americans with Disabilities Act (ADA) and the Family and Medical Leave Act.

One respondent writes, “I network with other owners and discuss issues. I learn a lot from my peers, even those from other industries.”

Others managers would just like time for supervisory duties. “I need more time to spend, some one-on-one time, with my staff,” writes a respondent.

Subscribers to American Laundry News e-mails are invited to take the industry survey anonymously online. All managers and administrators of institutional/OPL, cooperative, commercial and industrial laundries are encouraged to participate, as a greater number of responses will help to better define operator opinions and identify industry trends.