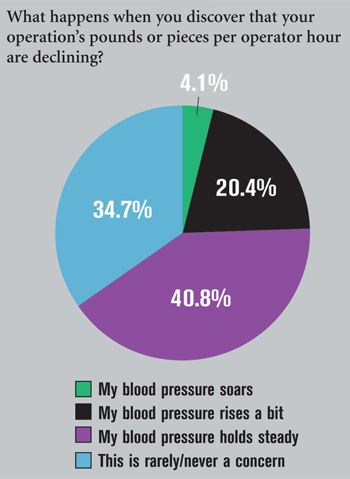 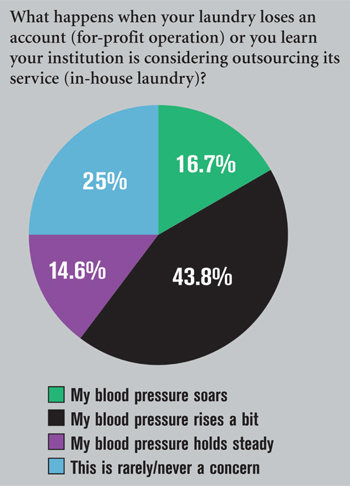 CHICAGO — Do you keep your cool when things start to heat up at your laundry? Do even the smallest things eat at you, or does it take a major problem to make your temperature rise?
When American Laundry News presented a slew of pressure-inducing scenarios in its Wire survey in July, most respondents said their blood pressure holds steady or the issue at hand is rarely or never a concern. But there was one situation that had six out of 10 respondents admitting that it would make them at least a little nervous.LOSING AN ACCOUNT (FOR-PROFIT OPERATION) OR INSTITUTION CONSIDERS OUTSOURCING (IN-HOUSE OPERATION)
This scenario creates the most blood-pumping anxiety for respondents, with 43.8% saying their blood pressure “rises a bit” and another 16.7% saying it “soars.” Twenty-five percent say this is rarely/never a concern, and the remaining 14.6% say their pressure holds steady.KEY PIECE OF EQUIPMENT BREAKS DOWN
A combined 44.9% (blood pressure rises a bit, 30.6%; soars, 14.3%) of respondents are anxious when a key piece of equipment breaks down, while 46.9% say their pressure holds steady. The remaining 8.2% say this scenario is rarely/never a concern.LAUNDRY IS SCHEDULED FOR INSPECTION
An upcoming inspection would have a combined 42.9% (blood pressure rises a bit, 38.8%; soars, 4.1%) of respondents a bit nervous. Roughly 47% of respondents say their blood pressure would hold steady, and the prospect of an inspection is rarely/never a concern for 10.2%.COMPETITOR OPENS IN SERVICE AREA
Were a competing laundry operation to open in their service area, 26.5% say their blood pressure would rise a bit and 6.1% say it would soar. Approximately 35% believe their pressure would hold steady, and another 32.7% say the scenario would rarely or never be a cause for concern.TIME TO PRESENT BUDGET PROPOSAL TO BOSS
Roughly one-quarter of respondents admit that their blood pressure rises (rises a bit, 20.4%; soars, 4.1%) when it’s time to submit their annual budget proposal. Roughly 43% say their pressure holds steady, and 32.7% say the task is rarely/never a concern.POUNDS OR PIECES PER OPERATOR HOUR ARE DECLINING
This is the least worrisome of the scenarios, based on the combined responses. Only 24.5% say their blood pressure would soar (4.1%) or rise a bit (20.4%). Roughly 41% say their blood pressure would hold steady, and the remaining 34.7% say this scenario would rarely or never concern them.
Subscribers to American Laundry News’ Wire e-mails—distributed twice weekly—are invited to participate anonymously in a brief industry survey each month. While it presents a snapshot of readers’ viewpoints at a particular moment, the survey should not be considered scientific.
The entire American Laundry News audience is encouraged to participate, as a greater number of responses will help to better define operator opinions and industry trends.
Click here and follow the menu instructions to sign up for the free e-mail service.