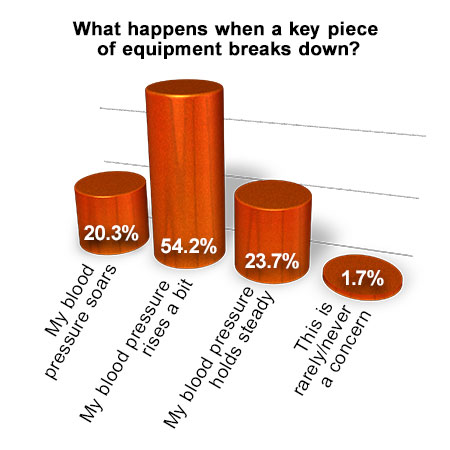 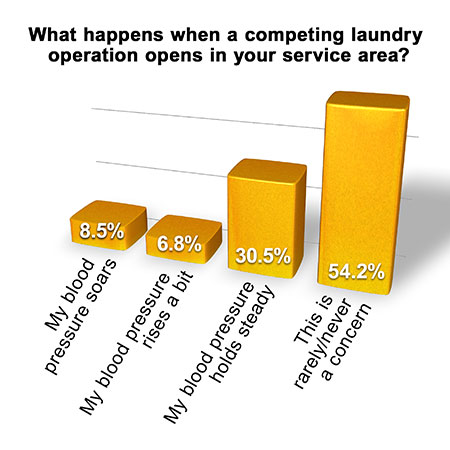 CHICAGO — The majority of laundry/linen operators polled say they can keep calm under pressure in most situations, according to March’s American Laundry News Your Views survey.

Equipment breakdowns garner slightly higher stress levels, as more than half of respondents (54.2%) admit that such a scenario would be cause for concern.

Roughly 20% say their blood pressure soars when equipment fails, while 23.7% say blood pressure holds steady when that happens. A small fraction (1.7%) say they rarely or never experience such breakdowns.

“I am part of a government entity, so when there’s a breakdown, it’s a horrifying experience if it turns into getting new equipment,” says one respondent.

“It is extremely difficult to manage a laundry when you do not have your own maintenance person,” says another. “When you have to depend on in-house maintenance, you are in real trouble. That is why my blood pressure soars.”

More than a third (39.7%) of laundry/linen operators polled say they’re able to keep calm for scheduled inspections, while 29.3% say inspections aren’t a concern at all. But for roughly 22% of respondents, inspections are a cause for a slight increase in blood pressure, and a small percentage (8.6%) admit that stress levels skyrocket during these times.

“Being a general manager is a very stressful job,” one respondent comments. “You have to learn how to handle it and never let them see you sweat.”

Respondents had a range of reactions to losing an account or learning that their institutions are considering outsourcing their in-house laundry services. The largest share (35.6%) say such a scenario is rarely or never a concern, while roughly a quarter of respondents (25.4%) say it can be a major stress inducer.

For 23.7%, losing an account or dealing with the prospect of outsourcing only leads to a slight increase in blood pressure, and 15.3% say their stress levels don’t vary much in such situations.

“Never sweat the small stuff, and ask yourself, ‘Will it make a difference five years from now?’” one operator advises.

When a competing laundry operation opens in their service area, roughly 54% of operators polled do not see it as a concern at all. For 30.5%, that situation means a steady stress level, but stress increases a bit for some (6.8%) and a lot for others (8.5%) when competition comes to town.

Presenting budget proposals to bosses is another scenario that doesn’t rattle laundry/linen operators much, according to survey results. Only 8.5% say it causes stress levels to rise considerably, and 18.6% admit it can be slightly stressful. For 44.1%, it’s not a task that causes much upset, and nearly 30% say presenting budget proposals is rarely or never a concern.

When asked about the stresses of managing a laundry operation, respondents pointed to a number of additional factors not listed in the survey, including weather, power outages, personnel issues and lack of qualified staff to fill vacated positions.

“Being a new operation, my major stress is establishing accounts,” says a respondent.

“Stress is a normal part of running a plant in this industry,” says another. “It does no good to let it control your health or make poor decisions because you choose to let it bother you.”