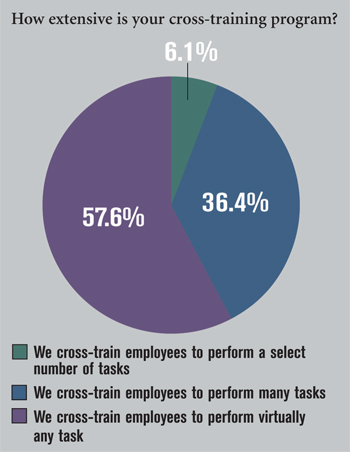 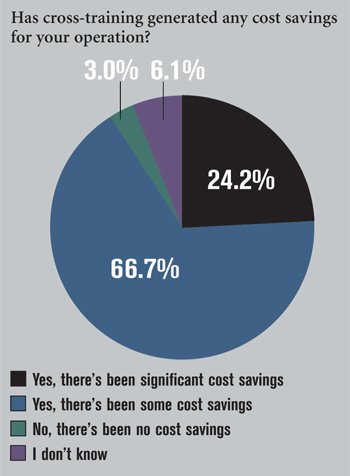 CHICAGO — It isn’t often that a management practice gets universal support or opposition, but cross-training is an issue everyone can agree upon, based on the results of June’s Wire survey.
Every industry professional who took American Laundry News’ unscientific survey said employees are cross-trained under their supervision so they can perform various laundry/linen service tasks.
The areas in which they cross-train these workers, or have interest in cross-training them, vary. Respondents could pick from six different areas, including an “Other” category. Processing (dry/iron/fold) is most common, selected by 93.9%, followed closely by soil sorting at 87.9%. Other common cross-training areas are washing (75.8%), distribution/collection (69.7%) and packaging (60.6%).
Roughly 24% picked “Other,” identifying tasks such as logistics; labeling, sorting, bagging and delivering resident clothing; surgical pack assembly; and housekeeping.
Respondents reported cross-training their employees to “perform virtually any task” (57.6%), “perform many tasks” (36.4%), or “perform a select number of tasks” (6.1%).
For roughly 27% of respondents, their operation’s pay scale varies depending on the level of cross-training an employee has received.
Cross-training has created problems for just 9% of respondents. Examples shared were employees who can perform a task but not as quickly as others, disagreements among staff about who can best fill a vacated position, and, simply, “operational inefficiencies.”
Two-thirds of survey respondents believe cross-training has generated “some cost savings” for their operations, while 24.2% credit the practice for having generated “significant cost savings.” Only 3% say there has been no cost savings, and 6.1% don’t know.
While the American Laundry News Wire survey presents a snapshot of readers’ viewpoints at a particular moment, it should not be considered scientific.
Subscribers to American Laundry News’ Wire e-mails — distributed weekly — are invited to participate in an industry survey each month. The survey is conducted online via a partner website. Each survey is developed so it can be completed in 10 minutes or less. Readers are encouraged to participate, as a greater number of responses will help to better define operator opinions and industry trends.
Click here and follow the menu instructions to sign up for the free e-mail service.