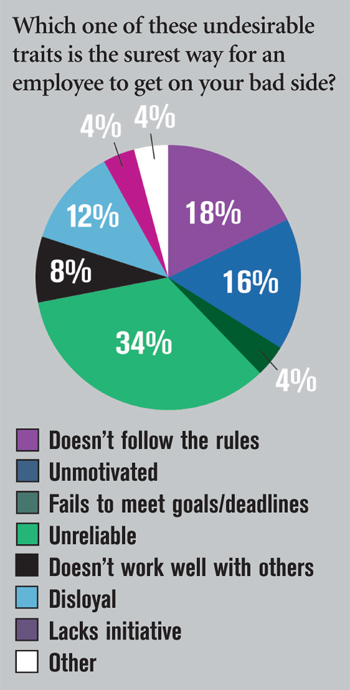 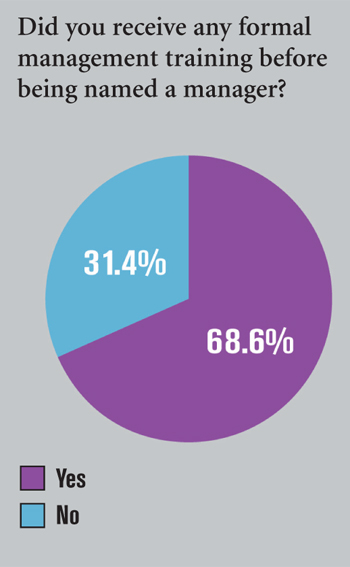 CHICAGO — What are the traits of a good employee? Which negative trait will fray a manager’s last nerve? These were just some of the questions that American Laundry News asked in this month’s Wire survey.
Dependability — chosen by 39.2% of respondents — is the trait most valued in an employee, but having a positive attitude (19.6%), being a team player (17.6%) and being trustworthy (15.7%) also garnered significant support. Taking direction and “other” traits each received 3.9% of the vote. No one who took the survey chose likeability or tactfulness as the trait they value most.
Being unreliable is the surest way to get on a manager’s bad side, according to 34% of respondents, but not following the rules (18%), lacking motivation (16%) and being disloyal (12%) are also areas to steer clear of, based on the survey results. Less undesirable was not working well with others (8%), failing to meet goals/deadlines (4%), lacking initiative (4%) and “other” traits (4%).
The numbers of full-time employees the respondents supervise run the gamut. Equal portions of 25.5% supervise fewer than 10 employees, or 10-25 employees. Running a close third at 23.5% was a staff of 26-50. Roughly 14% supervise 51-75 employees, 7.8% oversee 76-100, and 3.9% say they supervise a staff of more than 100 workers.
And being a manager means having to deal with difficult personnel issues, such as these:

Sixty-nine percent of respondents say they received formal management training before being named a manager. Seventy-one percent of respondents work in laundry management, with smaller percentages working in environmental services (7.8%), general administration (7.8%), housekeeping (5.9%), “other” (5.9%) or purchasing (2%).
Subscribers to American Laundry News’ Wire e-mails—distributed twice weekly—are invited to participate anonymously in a brief industry survey each month. While it presents a snapshot of readers’ viewpoints at a particular moment, the survey should not be considered scientific.
The entire American Laundry News audience is encouraged to participate, as a greater number of responses will help to better define operator opinions and industry trends.
Click here and follow the menu instructions to sign up for the free e-mail service.