RICHLAND, Wash. — In 1944, Harvey Stoller was working with his father at the Pantorium Laundry & Dry Cleaners in Walla Walla, Washington, when he won a bid to provide laundry service for the government town of Richland.

There were 100,000 people in Richland, and he had the only laundry in town.

In the 1950s, Stoller saw that adding rental linen would be a good fit, so the company focused more and more on the rental side of the market.

Today, Stoller’s grandson, Rick Snyder, is general manager of the company, U.S. Linen & Uniform, and the Stoller ability to see the value of adding and changing products has led to the service offering multiple lines and products, growing to serve a large swath of the Pacific Northwest.

“We are always looking at whether we should add or subtract a service or product,” Snyder says. “Our focus is on whether it will be beneficial to our customers.

“If it is a benefit to our customer, then we look at how well we can do it. If it meets both those criteria, then we will continue with or startup that product or service.

“We started out just servicing our local area. As the opportunities arose, we have expanded to new areas. Along the way, we have purchased seven small companies to help us grow and expand to new areas.

“We keep looking for new opportunities.”

U.S. Linen & Uniform’s story actually begins in 1901 with Snyder’s great-grandfather, who went to work for a tailor in Portland, Oregon.

“The first thing he did was burn a hole in a pair of pants,” shares Snyder. “The owner wanted him to pay for the pants. He was going to quit, but they settled it so he continued working there.

“In April 1901, he was offered a job in Walla Walla, Washington. Someone who had worked for the tailor in Portland had started a laundry. He moved to Walla Walla.”

On July 9, 1901, Snyder’s great-grandfather purchased the business and started the Stoller Cleaning Club.

“My grandfather would go to the farms, and for a $1 month you could get all your clothes cleaned,” he says. “Even in 1901, my great-grandfather had figured out the benefits of flat-rate billing and under wash.”

Since then, the Stoller sense has influenced U.S. Linen & Uniform, helping it continue to expand and evolve. Snyder says the company started barcoding and using automated sorters in the 1980s. In 2014, they added radio-frequency identification (RFID) chips.

“We even publish our own 44-page catalog,” Snyder adds. “Our trucks are some of the best looking and most noticeable in any industry.”

In 2010, the company installed a ceramic micro-filtration wastewater system, allowing it to recycle about 75% of its water.

“The water we discharge to city has about 95% of the contaminants removed,” shares Snyder.

However, the “laundry list” of industries the company serves is extensive, ranging from food to automotive, from doctor’s offices to truck repair services.

“Our coverage area was about 70,000 square miles, and there are only about 2 million people in the entire area. There is not enough business in our area to focus on one industry. We have to serve every industry.

“The benefits of serving so many different industries really showed up last year. The hospitality industry in our area went down about 75%. The industrial and food processing industries actually increased last year. Being diversified saved us last year.”

However, serving so many industries does have its challenges.

“We can’t focus on doing one thing,” Snyder points out. “We have to set up the plant to handle all the different items that we have to process. We just don’t get as efficient as we could be.

“Employees could be working on the flatwork ironer in the morning and hanging garments for the steam tunnel in the afternoon. The next day, they might be doing something different. All of our production employees get proficient in several areas.”

The Richland plant has the following equipment:

“We are getting close to opening the Portland plant back up,” shares Snyder. “Last March we had 175 employees. Presently we have 140 employees.”

The Portland plant has the following equipment:

Before the pandemic, the service was processing nearly 250,000 pounds of goods per week. When Washington, Oregon and Idaho first went into lockdown, poundage dipped to as low as 130,000 pounds per week.

“Our pounds processed was all over the board last year,” shares Snyder. “Pounds would go up until a new lockdown was implemented. Then the volume would drop, and we would start all over again. This happened several times.

The key to success, he says, is to create solutions that customers love.

“Everything we do is based on benefiting the customer,” points out Snyder. “Customers don’t just work 9 to 5. We are on call evenings and weekends with our ‘Service When YOU Need It!’

“Customers hated getting big surprise charges for lost goods, damaged goods, or name emblem and prep charges. We implemented a textile maintenance program with our ‘No Surprises Billing & Inventory Plan.’

“One of  the biggest issues in our industry is missing garments. We use RFID technology to guarantee that garments are returned with 100% accuracy with our Star Tracking System.”

While serving so many industries helped keep U.S. Linen & Uniform going, Snyder admits the past year or so has been rough.

“We had to lay off our entire production crew in Portland,” he says. “We laid off some administrative personnel and cut back on hours in the Richland plant. With the PPP money, we were able to bump everyone’s hours up in Richland, as we had people painting, fixing, cleaning, organizing and several other projects.

“Since we had almost no table linen being rented, we spent that time putting RFID chips in all the table linen, aprons and other linen items.”

Snyder also shares that it was difficult to watch other successful businesses being shut down.

“Lots of our customers suffered more than we did,” he points out. “We did whatever we could to help out. We lowered stop minimums. We charged accounts every other week. If they asked for something, we would do it.

“As with most companies, we weren’t prepared for something like the lockdowns and the shutting down of the entire hospitality and travel industries. Being diversified isn’t the best choice for efficiency, but it was a good thing when this crisis hit. We will continue to be diversified and not get too focused on any one industry.

“We had been in growth mode for quite a while. We should be able to continue that growth and expansion for years to come. We will keep looking for new opportunities.” 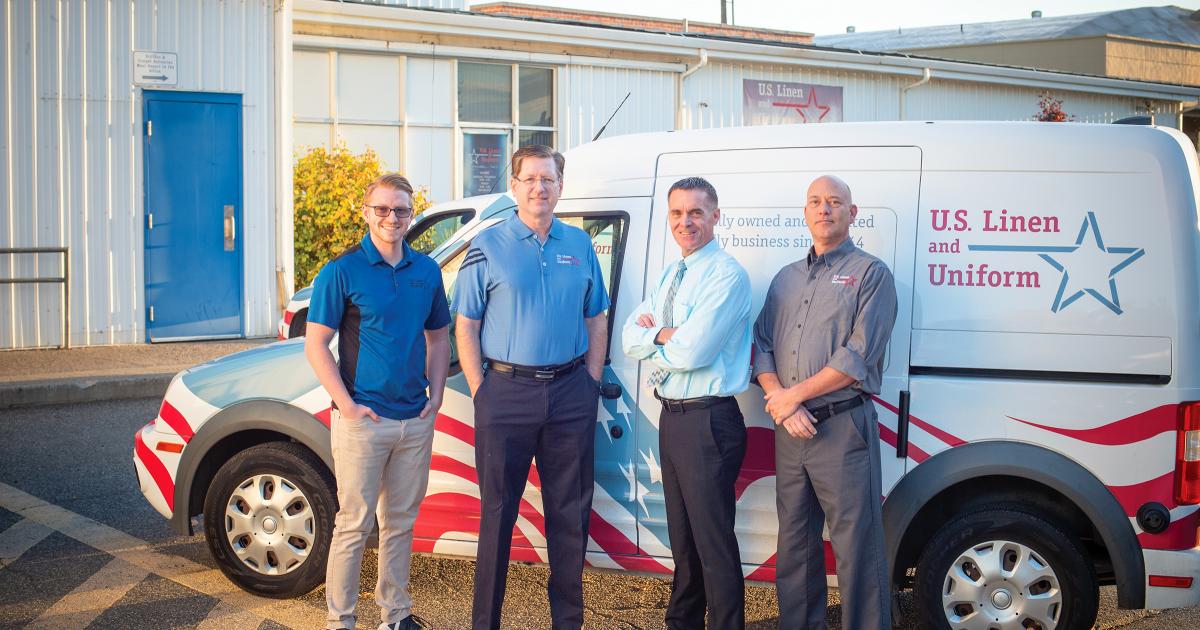