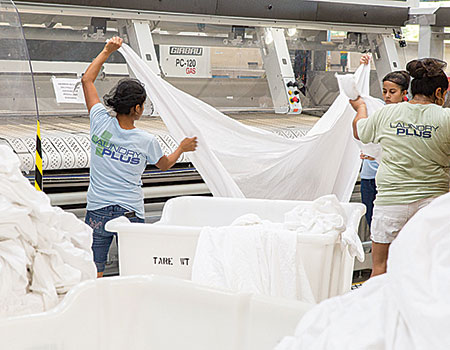 Plants look to automation to save labor costs, increase pounds per operator hour

CHICAGO — Automation, simply put, is the use of various types of control systems to operate equipment and processes—without human interaction being necessary.

Automation is seen in the production of cars and trucks, food and beverage processing, even in flying an airplane.

The laundry industry has turned to automation as well.

A main objective of laundry automation is to reduce labor costs by reducing the “number of physical touches” that employees have with the linen, which results in increasing PPOH (pounds per operator hour), according to David Carter, vice president of North America sales for equipment manufacturer Pellerin Milnor Corp.

He says another objective is to reduce utilities usage per pound processed. Finally, the automation should help manage linen inventory levels and related investment without compromising customer service.

“Automation has become very important in the laundry with the drastic increases in labor costs,” says Tony Jackson, director of national accounts for equipment maker Kannegiesser USA. “It is much safer for employees, especially in the washroom, to not manually load washer-extractors in large batches.”

He says the improvements can be achieved and sustained as long as the appropriate process controls, discipline and operational maintenance protocols are put into place and factored into the design and implementation of any automated solution.

“A failure to design, plan and optimize the strategy for implementing automated solutions will result in a less-than-desired outcome,” Gudenburr says. “In some cases, it can actually negatively impact operational efficiency. The importance of due diligence, and a qualified process for designing and implementing solutions, cannot be overstated.”

AREAS OF OPERATION TO AUTOMATE

When it comes to figuring out where a laundry can automate, Carter first looks at material handling—soil sorting and overhead soil- and clean-rail linen storage systems.

“These systems reduce the number of employee physical touches with the linen,” he says.

Gudenburr agrees that the soil room is an area that has a high labor need, which typically can benefit significantly in productivity gains and has the potential for significant workman’s compensation-related injuries.

“The implementation of conveyors, sort-on-rail capabilities and rail delivery systems can have a significant impact on operations,” he says. “However, it is critical that operators realize that in order for downstream process areas to benefit from such an implementation, they must become very disciplined in how they schedule and sequence soil into the washroom.”

Next, Carter says that wastewater recovery systems can recover a high percentage of the water as well as heat in the water, and reduce water and sewer costs along with water-heating cost.

Jackson sees three key areas for a laundry to automate (dependent on the type of laundry). First is to transition from manual washer-extractors and dryers to a tunnel washing system. Then, a system for garment sorting and another for dry folding.

“For the dry-fold area, having small-piece folders perform quality folds helps efficiencies by taking out the manual folding process of towels, etc.,” he says. “Automated garment systems help greatly with both labor and utilities. Having the ability to go directly from extraction to the garment steam tunnel saves in dryer capacity and gas costs. In addition, the articles are automatically sorted and folded, which provides tracking and greater quality to customers.”

“The washroom is the first area where a facility can use automation to shave operational costs, improve efficiency and boost throughput,” he says. “Generally, if your laundry is doing 1,500 pounds of laundry per hour, it’s time to consider automation in the form of a continuous batch washing system (tunnel system).”

Willer says his company’s system can be configured with five to 12 modules to meet volume needs up to 3,300 pounds per hour. However, he says he sees positive returns using a batch tunnel washing system to process as few as 1,500 pounds per hour.

“So, in a very small space, an operation pushing out 1,500 pounds of laundry per hour, or more, will realize huge savings in efficiency and labor over using open-pocket washers,” he says. “Keep in mind, it only takes one person to load a batch tunnel washer, which uses approximately 0.6 gallons of water per laundry pound versus an open-pocket washer, which uses 1.8 to 3 gallons per laundry pound. The water reclaim system significantly cuts water usage.

“Simultaneously, the heat reclaim system uses the heat from drain water to pre-heat water coming into the tunnel from outside. This cuts natural gas (to heat the water) usage by 30%. The savings go on and on, even for smaller laundries.”

“There is no need today to have a washroom that requires more than one or two operators per shift, depending on type of equipment and market segment serviced,” adds Gudenburr. “With the advent of highly sophisticated tunnel systems and automated conventional washrooms, there should be no need for a large workforce that spends its days pushing carts and performing the back-breaking tasks of loading and unloading machines.”

Willer says the most labor-intensive area of a laundry is on the finishing side because it involves folding. By adding automation, such as feeders, ironers, folders and stackers, he says hospitals and hotels can significantly decrease labor and operational costs while bolstering throughput.

“Let’s use the following example to show the impact of towel-folding automation. A person can fold about 120 pieces/towels per hour,” Willer says. “By comparison, Girbau Industrial’s FT LITE, a dry-goods folder, automatically folds and stacks 400 to 600 pieces per hour. Similarly, the FT-MAXI automatically sorts, folds and stacks 650 to 1,000 pieces of varying sizes per hour. A small-piece folder doesn’t take much space and is relatively inexpensive. Yet, it makes a huge impact on operation costs.”

By adding an ironer with a sheet folder, hospitals and hotels cut operational costs further still, Willer says, while boosting throughput and quality.

“There are many laundries that don’t iron for quality,” he says. “Rather, they use ironers and folders to reduce labor costs and improve throughput.”

To illustrate this, Willer looks at sheet processing with and without automation.

Without automation, he says an operator unloads a washer full of sheets, loads them into a dryer and runs the dry cycle. Then, an operator removes the dried sheets and folds and stacks them by hand.

With automation, an operator unloads a washer and feeds the sheets directly into the ironing/folding system, according to Willer. The items are automatically dried in the ironer and then automatically folded and stacked.

“In this scenario, we are speeding up the folding process and eliminating the dryer,” he says.

Gudenburr agrees that textile finishing is an area ripe for automation.

“Through the use of ‘dynamic’ processing lines, and automated delivery and take-away/pack-out solutions, there is a significant opportunity to reduce touch labor, material handling, infrastructure and operating space via a reduction in equipment density,” he says.

“The same holds true for the implementation of small-piece folding equipment,” he says. “There still are many locations that are manually folding terry products that can quickly benefit from said systems.”

Gudenburr notes that in some smaller on-premises laundries, a manual or semi-automated environment may exist. However, even in these cases, he says there are solutions available to simplify tasks and assure efficient turn rates.

In terms of route solutions, Gudenburr says there are a host of simple systems that can be put into place to reduce material handling and exposure points to material handling, and improve the efficiency of loading and delivering routes to end-users.

There are also automation solutions for areas that a laundry operation might not have considered, according to Gudenburr. Safety systems is one such area. He says that operations often do not think about the significant costs that an unsafe facility presents.

“Many in the industry say they want to be safe, but once the cost of implementing proven solutions is presented, these same individuals tend to ‘roll the dice’ rather than invest,” Gudenburr says. “Unfortunately, it only takes one serious injury or, God forbid, a fatality to essentially pay for the noted safety systems. There are solutions available today that weren’t a few years ago.”

He says the solutions have eliminated a great deal of the upfront capital associated with a complete safety-rated washroom and the life-cycle costs associated with maintaining the various monitoring solutions that used to be part of such systems. He adds that it has been proven that these systems positively impact productivity.

“Through the advent of patent-pending technology, there are solutions like chute-loaded dryers that eliminate the need for material-handling shuttles, improve system productivity and afford a great deal of site design flexibility,” he says. “These systems are just starting to be embraced in the tunnel operating space, and are available for the conventional washroom as well.”

Check back for the conclusion Thursday about choosing equipment and other considerations.