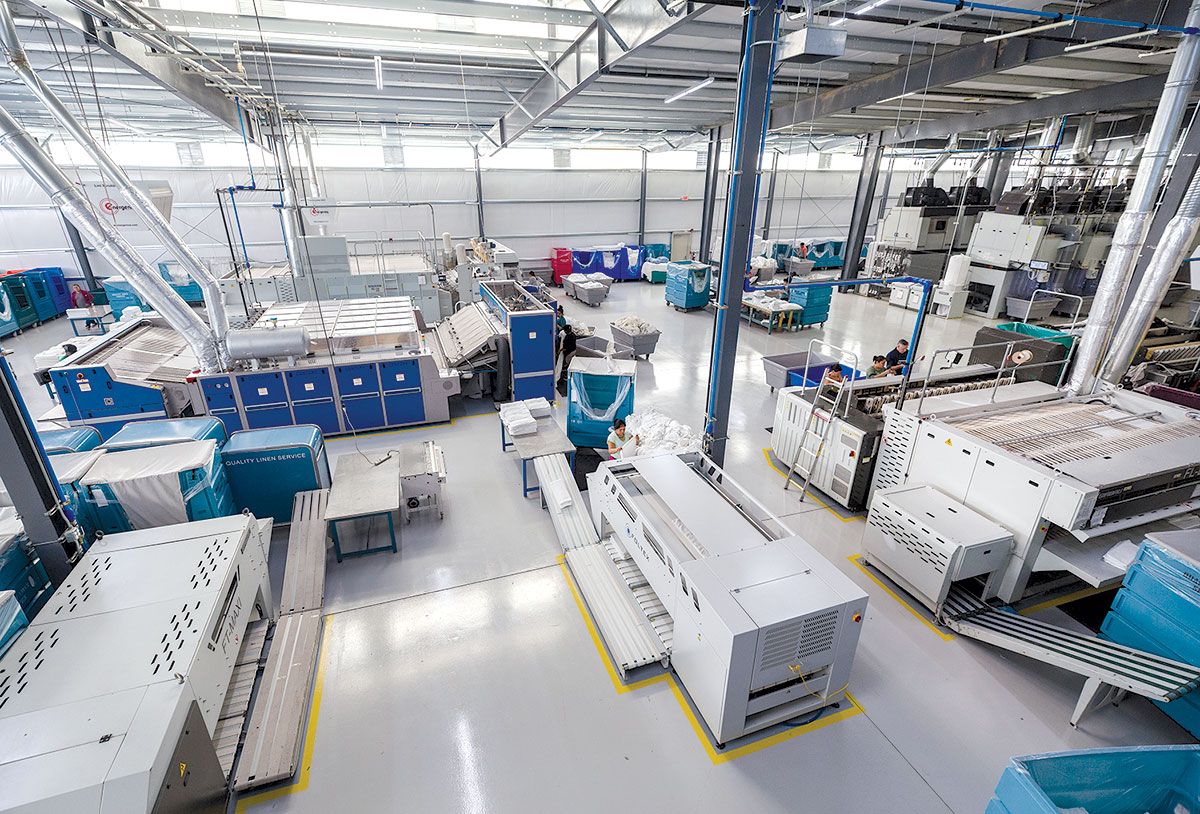 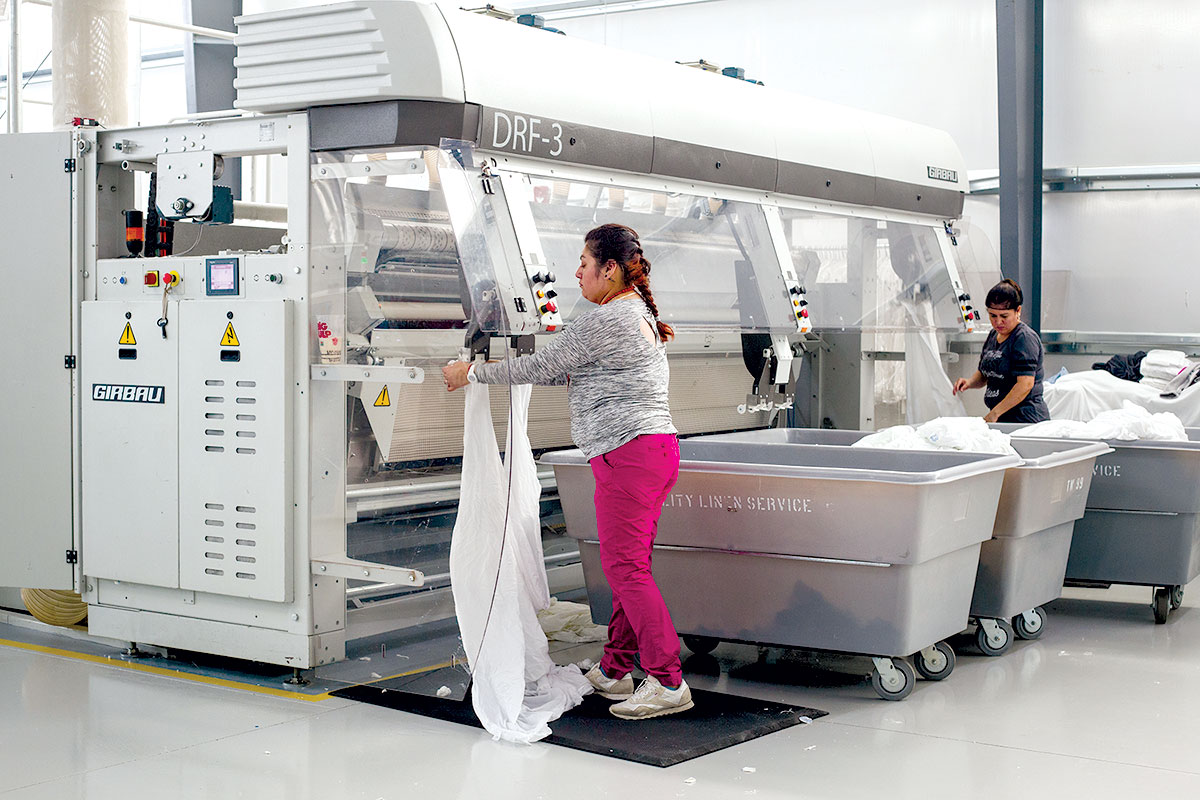 SALISBURY, Md. — When Dicky Smith acquired Quality Linen Service in 2014, he did so with a mission—to improve efficiency, grow production and achieve the critical mass necessary to produce 100 pounds per operator hour (PPOH).

Since then, the industrial laundry located here has upped production from 1.5 to 12 million pounds per year. But, these results didn’t come without shaking things up.

Together with Chief Engineer Dan Plaskon and Operations Manager Doug Colonna, Smith analyzed every sector of the business for efficiency, including pickup, sorting, washing, ironing, packaging and delivery.

“It was pretty easy to see where the major bottlenecks were occurring,” Smith says. “We set out to improve 150% across the board.”

As the ship was tightened and processes streamlined, Smith’s gaze fell on Quality Linen’s production equipment. In order to grow and achieve needed production, he required additional equipment and automation. To make room, he tripled the plant’s square footage from 10,000 to 30,000.

“Our goal was to be a healthcare laundry provider,” he shares. “We designed the plant and our equipment makeup for healthcare.”

Yet, Quality Linen does it all. Located 30 minutes from Ocean City, a resort town that bustles during the summer, Quality Linen also processes overflow hospitality laundry for hotels and resorts. The plant is equipped to be flexible to serve all customers efficiently.

To get it properly outfitted, Smith worked closely with a team of engineers and specialists at Girbau Industrial (GI).  He was familiar with GI equipment because the plant already utilized a seven-module GI Eco-Tunnel, an ironing line and an open-pocket wash line with two Continental Girbau 125-pound Pro-Series II Dryers, and E-Series 90- and 55-pound capacity washers.

“The GI team is world class,” Smith says. “They took our input and gave us the support we needed. They brought in great people to help and invested a lot in training our staff on preventative maintenance, operation and troubleshooting. Today we are self-sustaining and can do it all in-house.”

“It’s unique to have a mixed-use plant in the industry,” says Seth Willer, GI national sales manager. “Their location is kind of remote, and Dicky does a great job of capturing his market and serving a bunch of different industries. He does it all and does it well.”

They also require very little labor, according to Smith. One operator selects a customer number and program on the central computer screen and loads the tunnel conveyor. The tunnels automatically track, wash and dry each 110-pound load. While sheets are quickly separated in the dryer and fed into an ironing line while still damp, towels are completely dried and run through the laundry’s automated folding and sorting systems.

Thanks to the tunnel addition, Smith enjoys peace of mind. If one tunnel fails, the other can operate at night to keep production on track. Although he could run two shifts, he prefers to keep it simple for now.

“We can wash north of 5,000 pounds per hour,” Smith shares. “Now the question becomes how many shifts? We process 12 million pounds in a single, 9-hour shift. If we ran two full shifts, we’d process 22 million. But, we don’t need to be that busy.

“We are a redundant shop in terms of the facility and equipment. But if something were to happen, we could use the other 15 hours a day to correct it. If one tunnel goes down, we can use the other at night to make up for it.”

On the ironing side, Quality Linen has three GI ironing lines and each features a chest ironer and corresponding folder/stacker.

The GI ironing lines also process hospitality linens during the summer months, according to Smith.

Gas-operated and 93% efficient, the GI ironers automatically adapt cylinder speed according to linen type and moisture content—eliminating the need to pre-dry items. Rather, items are dried as they pass through the ironer, which boosts production and lowers natural gas usage, according to Smith.

Programmable to meet specific needs, the GI ironing lines require three operators each—two to feed and one to catch—and operate at speeds up to 164 feet per minute.

At the front of one of the ironing lines, a DRF multi-station spreader feeder automatically straightens items and feeds them into the ironer. The feeder addition further boosts processing speeds and ironing quality for amped production and a superior final product, Smith says.

Finally, a fourth ironing line, which is dedicated to healthcare goods, consists of a Chicago feeder, ironer and folder.

On the dry goods side, Quality Linen relies on two Foltex folders to quickly fold terry, thermals and gowns out of the dryer.

“Automation is important because this is a labor-intensive business,” says Smith. “It’s much more accurate and efficient to automatically fold items using machinery over hand folding.”

Finally, a hard-working open-pocket wash line tackles niche laundry and heavily soiled items. In 2016 with the plant’s expansion, it added 620 pounds of capacity to that line. Comprised of E-Series soft-mount washers and complementing dryers, the open-pocket wash line features one 55-, one 90- and three 255-pound capacity washers.

“These are programmed for more mechanical action and longer cycles to clean heavily soiled items like napkins,” Smith says.

The line is reserved for about 20% of Quality Linen’s production needs, which include hospitality and food and beverage laundry. The soft-mount washers reach high extract speeds for moisture removal and quicker dry times—once again giving production a boost.

“We just switched our wash formula to a caustic-free, completely natural formula that kills microbes and provides for cleaner loads,” points out Smith. “Linens last at least twice as long and it’s environmentally friendly. The city measures our oxygen and phosphate levels. We have zero. We also get tested for microbe colony-forming units. If you score a 20 or less, you pass. We typically score a zero.”

At a time when the commercial laundry industry struggles to find quality labor, Smith doesn’t.

“We start employees at $10.25 per hour and don’t have difficulties finding help,” he says. “No one makes minimum wage; our working conditions are very nice, and we don’t experience much turnover.”

“Machinery, efficiency and production fall right into my wheelhouse,” says Smith, who grew up on a farm and has led a number of companies throughout his career.

Legally deaf since 1992, Smith regained his hearing after cochlear implant surgery a year ago. It’s no wonder he’s sympathetic toward disabled workers. Since he acquired the struggling Quality Linen four years ago, he’s gone from five employees to 86. Several of them are disabled.

“One of my best employees is deaf, and I have two with epilepsy and several with autism,” he shares. “Some folks can’t do it physically, but if they can achieve 80% efficiency, that’s good enough for me.”

In the end, Smith’s goal is to provide a quality product and service to his community, along with happy employees.

“All decisions today are made with an eye on five years out,” he says.

Thus far, he’s achieved his goals. Quality Linen’s production has skyrocketed, but not at the expense of employees or customers. Quality, redundancy and efficiency are better than ever.