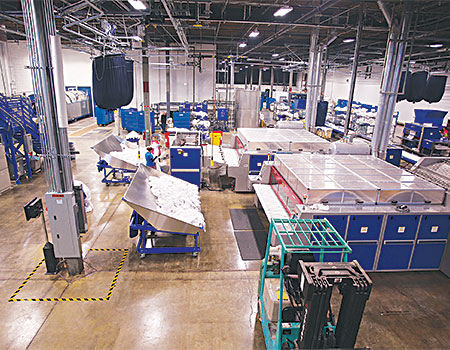 SKOKIE, Ill. — EcoBrite Linen opened its doors in this north Chicago suburb in November 2015 with one customer in mind: nursing homes.

It took some time for CEO Brian Polatsek to see the vision of providing full rental laundry service for skilled nursing facilities, but when the idea clicked, he created an operation as efficient and automated as possible.

“The value in the industry is by achieving efficiency both on the labor side and the utilities,” he says. “If you do that, there’s room to provide added value for the customers, save them money and be able to make money as well.”

Because Polatsek came into the laundry and linen industry from the outside, he says that has helped him look at how things are done without any “preconceptions.”

One example he gives as a way his “outsider” status is helping to improve the efficiency of the company is in regards to sorting. EcoBrite post-sorts.

“There are not many plants in the U.S. that do that,” says Polatsek. “I analyzed it, and everyone told me that I’m crazy, it’s just not done that way, doesn’t make any sense, you’ll be using a ton more chemical, longer wash time, a lot more water, you’ll wear out your linen.

“I don’t accept anything at face value. You have to put numbers to everything. I started asking what are we looking at, how much more chemical am I going to be using.”

He says that he found that in using a tunnel, chemistry is being transferred. Also, there are always pockets of heavy soil and light soil. There will always be a blend.

“It’s not like you can choose to wash the lightest and the heaviest,” Polatsek says. “You’re somewhere in the middle, anyway, so what’s going to be the difference in reality? It was really pennies, fractions of pennies.”

He says the advantage he found in post-sorting is that EcoBrite has a smaller soil room with fewer employees handling soiled linen. Sorting in soiled, he adds, is inefficient because employees stand back and reach.

“From an ergonomic perspective, soil-sort is not conducive to ergonomics,” he says. “Whereas if it’s clean, no one’s afraid to lean into it and work more efficiently. That was my theory, and it’s working out pretty nicely.”

Still, there was a learning curve for both EcoBrite and its customers with the new skilled nursing facility laundry venture.

“Going from in-house to outsourcing, some of them had to figure it out,” says Polatsek. “A lot of facilities had hoarding issues. We learned in the first few months what the challenges are in the transfer. And there were some things that we didn’t anticipate.”

He says the company thought the customers could manage distribution of their own linen, but they found the nursing homes needed guidance.

“We set up distribution programs—how to distribute, how to maintain balanced linen closets, how to maintain the linen room,” he says. “They have shelves and they’re marked with what goes where, and it makes it very easy for them to manage it properly. The customers that follow the system, they almost don’t have to have any interaction with us on the linen side.”

Another factor surprised the company: the number of personal items that come in mixed with the linen.

“That’s huge,” Polatsek says. “We get about a thousand pounds a day of personal laundry mixed in with the linen.”

As with every other aspect of EcoBrite’s operations, he says it created a process to handle those “resident personals.”

“We’ve developed systems, it’s like a five-step process, in order to get those back to our customers,” he says. “I have one employee that it’s their job to make sure those get returned to the right facility. We developed a system internally to track and capture the stuff before it gets mixed in with our rental products.”

All things considered, however, Polatsek says EcoBrite is on the right track for the future.

“The capacity of the plant is about 30 million pounds a year,” he says. “We deliver three to five days a week, open six days a week. We run one shift Sunday, one shift Friday, two shifts the other four days.

“Second shift is a partial shift, but as we ramp up, it will become a full shift.”