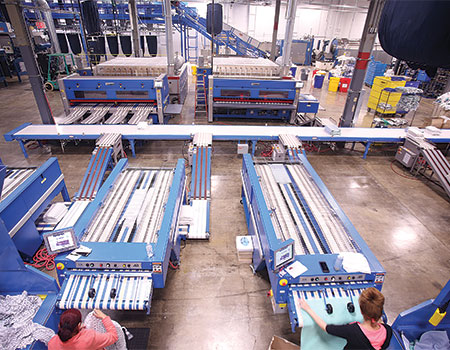 SKOKIE, Ill. — EcoBrite Linen opened its doors in this north Chicago suburb in November 2015 with one customer in mind: nursing homes.

It took some time for CEO Brian Polatsek to see the vision of providing full rental laundry service for skilled nursing facilities, but when the idea clicked, he created an operation as efficient and automated as possible.

“The value in the industry is by achieving efficiency both on the labor side and the utilities,” says Polatsek. “If you do that, there’s room to provide added value for the customers, save them money and be able to make money as well.”

Polatsek hasn’t been in the laundry and linen industry for long. However, he is familiar with nursing home operations.

He had relationships with skilled nursing facilities because in 2009, he worked for an energy consulting firm in the Skokie area.

“During my process of servicing these customers, I would occasionally walk through facilities and analyze energy usage,” says Polatsek. “Laundry was one of the items that came up. They were running ancient equipment, water heaters with efficiencies running below 50%, all this waste.”

The question in his mind was why didn’t the facilities outsource laundry services.

“The answer was always, ‘Way too expensive, doesn’t make sense when it’s cheaper to do it ourselves,’” Polatsek says. “That was the mindset of most nursing home operations. I left it at that.”

Still, the idea of servicing nursing homes stayed within Polatsek’s orbit. He says there was a push for some facilities to start a centralized laundry, but the operators weren’t interested.

Then, his friend, the son of his boss, suggested Polatsek open a laundry.

“I said, ‘Nah, leave me alone. I’m busy enough as it is,’” he says. “I didn’t have time or interest to get into a totally new industry that I wasn’t familiar with.”

A year later, another of Polatsek’s associates decided to open a laundry to service skilled nursing facilities, and he wanted Polatsek to run it.

This time, Polatsek decided to look into the idea and visited laundries on the East Coast, which he says didn’t exactly inspire confidence.

“They sent me to one (laundry) in particular who they wanted to partner with, and I was less than excited,” says Polatsek. “It looked like the guy had more headaches than he could handle, and I said why would I want to get in such a business? Half the equipment wasn’t working, and he seemed to be struggling with collections, struggling with no cash flow.”

Still, Polatsek had to admit that the skilled nursing laundry idea had merit. Then, he visited a better-run operation and grew interested.

“I came back to these guys and said, ‘I think we have something worth looking into, but the only way it makes sense, the way I see it, we’d have to start off big, we’d have to start off basically with a Cadillac,’” he says. “I didn’t want to try to put together some used equipment and slap something out to get started. Then you’re just moving the work from one place to another, and there’s no value.”

Polatsek put together a business plan and visited his nursing home energy clients, going over their current costs versus what using an outsourced laundry would cost.

“There was skepticism at first, but eventually I sold them on the idea, and a lot of them also invested in the start-up,” he says. “It took about two years of planning, and we opened our doors in 2015. We started servicing our first client on Nov. 2 that year.”

Polatsek says he was very “hands-on” with the design of the plant because, as he says, he wanted a “Cadillac” operation from the very first day.

“I went around and looked at a lot of laundries, looked at what they were doing, and found out that the laundry industry has really not made any significant innovation in 20 years,” he says. “The majority of laundries are operating the same way they were 40, 50, 60 years ago. That’s where I saw one of the primary opportunities, to be able to take advantage of the technology that’s out there.”

Polatsek says EcoBrite installed the latest and most efficient equipment on the market, both in terms of energy and labor savings.

“I have a vision of automation,” he says. “I’m looking toward fully automated sorting and fully automated pack-in, pack-out. I have both designed, and I’m working with manufacturers on the sorting on the automatic pack-out.”

Polatsek says he’s looking outside the laundry industry to the material-handling industry in general for the pack-in process.

“Product will come down the line, get scanned, labeled, strapped and then go into a queue,” Polatsek says. “When you’re ready for an order, you select the order and the system will select the required items.”

“My customers don’t have to take inventory,” he says. “We monitor the inventory by what comes in and goes out. We have that added benefit.”

Polatsek says in using RFID, the orders are automatically assigned to customers based on order priority. Product comes down the line, and it gets scanned and assigned to a customer and is labeled. Then, it’s placed on customer carts.

“The customers don’t have to track—they don’t have to count,” he says. “There’s no weighing in, weighing out. That’s been removed because of RFID. When we’re done, we walk the cart through a scanner, scans it all out, prints a packing slip and when we’re done with all carts, print a delivery ticket, and we’re good to go.”

Polatsek says that because EcoBrite tracks each item individually, the company can charge for lost items using “hard data.” Each nursing home pays for the particular goods it loses, instead of a projected amount, he says.

“That’s one of the things I achieved with RFID technology, and as far as I know, I’m the only company that does this,” he says. “But that’s not my profit center. My profit center is the processing, is the rental. The goal is just to recover losses so they don’t cost me money.”

When it comes to charging for lost linen, Polatsek says the company bills based on depreciated value, not full value. That means if a sheet has a life of 120 cycles and has been through 80 cycles, the client only pays based on the remaining cycles.

Even with depreciated value, losing a piece of EcoBrite’s linens is a little more costly. That’s because Polatsek says he researched linens until he found “good data and decided to go with it.” The company rents microfiber flat sheets and pillowcases.

“I looked at the product, and it’s expensive but it doesn’t wear, holds up really nicely,” he says. “It’s resistant to stain, requires less energy to dry it. On paper, it looked good. Ultimately, I believe it costs me less because it holds up.”

Polatsek also says that RFID helps the company give feedback to its clients and helps them lower their own costs.

“We have a whole system that we can optimize customers’ usage,” he says. “How many items are they using per patient per day, misusing, overusing? We find out that they’re using flat sheets as draw sheets, using flat sheets as towels. Total misuse of product, and they’re paying for that. We can streamline that process.

“I’m not only saving my customers money with the general outsourcing, but we can add value, give them feedback to keep their costs down. The goal is that everyone is happy at the end of the day.”

Check back Thursday for the conclusion.