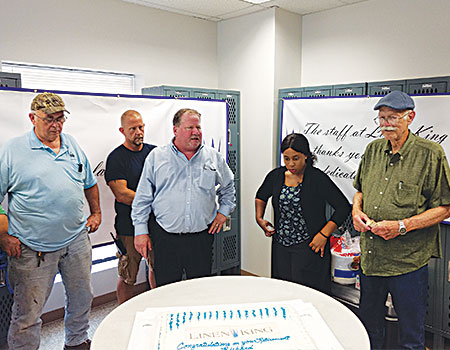 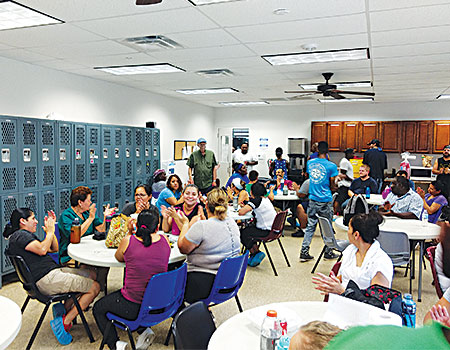 Richard Warren spent more the 50 years in the industry

CONWAY, Ark. — Richard Warren has been involved in the laundry industry for more than 53 years. Most recently, he was the general manager of Linen King’s plant here, which serves the healthcare industry.

“Most of my life, I did a short stint in the Marine Corps, but most of my life has been spent in laundries, one job or another in a laundry,” shares Warren. “It’s worked well for me.”

Earlier this year, he made the decision to hand in his gear and retire.

“I’m old, and I’m tired,” he jokes. “It just looked like it was time for me to just move on, close that book, close the book on the laundry thing.”

“I have a lot of respect for Richard as a plant manager and as a person,” says Gary Hutchinson, COO for Linen King. “I think Richard brought a sense of calm and professionalism to the position. He taught me a lot because I came from manufacturing and not laundry.”

Warren spent 11 years as the general manager at Linen King’s Conway plant. Prior to that, he worked 14 years at Institutional Services, first as plant manager and then as general manager.

Along the way, he’s held about every position available in the laundry industry.

“My first job was wrapping shirts in a shirt laundry, and then they moved me to a wash man,” recalls Warren. “I’ve done dry cleaning and all those things. I’ve held numerous positions: sales manager, service manager, route man, supervisor, that kind of thing.”

One thing about laundries, he says, is that they’re always looking for people.

“Back in the days when I was starting, I was just looking for a job, and that’s where I ended up finding them,” Warren says. “Come to find out I had some kind of ability, aptitude, talent, skill set, whatever you want to call it, to excel.”

In the laundry industry, he grew from a young man just looking for a job to being a professional who knows the value of hard work.

“I learned that when you really work, when you take some ownership of your surroundings where you are, the job you’re doing, management tends to look at that and smile,” shares Warren. “And then they give you another challenge, and if you succeed, they move you on. It wasn’t because of any special skills that I have. I just have skills getting along with people.”

“People knew what was expected of them, from the time they came in for a first interview to the time they were working,” says Hutchinson. “He set standards and held them to those standards, and that’s a big tribute to Richard because it’s very difficult to do, and he made it look easy over the years.”

Hutchinson adds that Warren always kept a sense of humor about him, even in difficult times.

“And he always said don’t worry about it, we’ll make it happen, we’ll get it done,” says Hutchinson. “We’ll miss that personality.”

What will Warren miss about Linen King? The excitement.

“Linen King is growth oriented. They look for opportunities and they take them. There’s always something exciting going on,” he says. “I’m interested when people tell me, ‘This is what you have to do, and I don’t know how you’re going to do it.’

“The fact that it was never a dull moment with Linen King was probably the most attractive thing about it.”

He’ll also miss the new, much larger Conway plant, which opened in 2017.

“Over the years, Richard outperformed much bigger plants with much better equipment and better facilities,” Hutchinson shares. “I have a lot of respect for that. He had systems in place and training took place.”

For a man who had a plan when it comes to laundry operations, Warren says he has no plans for his retirement.

“I’ll take it easy and just kind of play it by ear as it goes along,” he says. “We’re fortunate because we’ve got 10 acres where we live and there’s always something going on. It’s fun to work with this place I call home, to watch it develop.”

Interested to go deeper into Richard Warren’s laundry insights after his 50-plus-year career? Click here and listen to the recent American Laundry News Podcast when Warren was a guest.