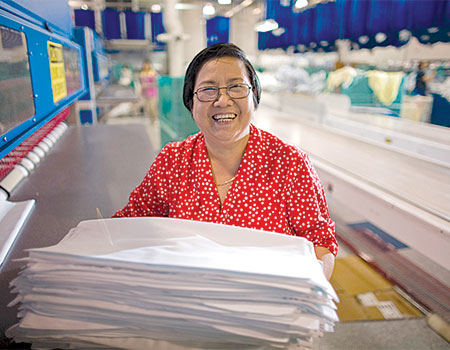 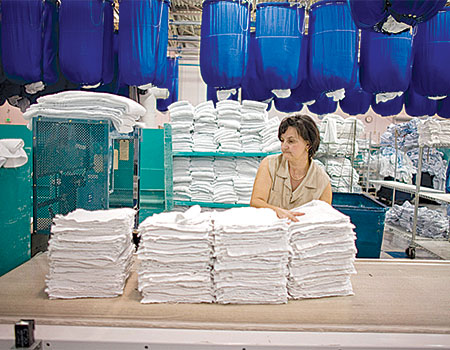 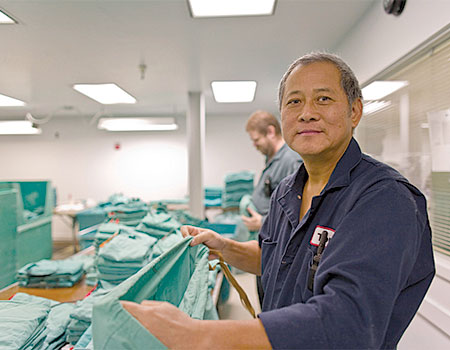 As can be imagined, such a large network creates a lot of laundry. Intermountain Healthcare’s Central Laundry is approaching 40 years as being the predominant commercial laundry service in Utah.

Now, the 70,000-square-foot facility here has grown to become the largest healthcare laundry service in Utah and surrounding states. The facility serves all the laundry needs for most Intermountain facilities, as well as many other medical clinic groups and hospitals in Utah.

Last year, the Central Laundry processed more than 20 million pounds of laundry. One day alone, the facility processes 36 tons of laundry—the equivalent of an average family’s laundry done over the course of 40 years.

While it would be easy for management at the Central Laundry to focus on the amount of linens being processed, leadership has made a point to focus on the diversity of the surrounding community, being a part of it, hiring employees with disabilities and those coming from other countries.

“I think that our demographics are changing, and I think there is a natural progression toward more diverse workplaces and trying to understand how we can work with one another even though we have those differences,” says Richard Bott, laundry services director at Intermountain’s Central Laundry.

“Also, how can we enhance all the experiences we have because of the different backgrounds we come from? I think that’s a real positive if chosen to look at it that way.”

Bott shares that Columbus Community Center believes there is dignity through work. The center takes people who would normally be in day programs or different activities that don’t really have them engaged in society or in the community and puts them in a position to engage and grow.

“This kind of flips that, puts them out in the workplace, gives them opportunities to gain work skills so that they can be more engaged and live more meaningful lives,” he says. “We’ve had many successes over the years, and a lot have come through this program and now are full-time Intermountain employees.”

Sarah Willhard, who has a disability, has worked for Central Laundry for 12 years and is one of their most productive employees.

“It has been able to improve my work skills,” she says.

Bott says that other participants in the program gained worked skills and are now working for other employers throughout the community.

“I was a little nervous when we brought the folks from Columbus, didn’t quite know how they would mesh with our employees, but there’s tremendous coaching and camaraderie that I wouldn’t change our culture for anything,” shares Bott. “It’s a beautiful thing to see our folks help people with disabilities, and become their friends, and help them to become the best that they can be, so it’s actually transformed our environment for the good.”

He encourages anyone curious about how Intermountain’s workforce model has achieved success to come and visit the facility.

“I think there are a lot of people who are concerned about what folks with disabilities might mean, challenges,” explains Bott. “It sounds good, sounds positive, but a lot of people don’t see it working in their environment.”

The laundry facility also employs immigrants from across the globe. More than two dozen different languages are spoken in the laundry, with many inspiring stories from the employees.

The Vuong family are refugees from Vietnam and endured hard trials just to make it to Utah. The Central Laundry has provided a stable job and became a beacon of hope for them.

Minh “David” Vuong spent 13 months in refugee camps after being tortured as a political prisoner in his home country of Vietnam. Now, after working at Central Laundry for more than 15 years, he gets emotional as he talks about how the job has helped his family.

“I appreciate what they have done for me,” Vuong says.

Lubjo Rajcevic came from war-torn Croatia in 1999. He spoke little English, but one day when he noticed one of the laundry machines was broken, he said, “I fix.” After that day, he has become one of the top maintenance workers.

Maintenance workers like Rajcevic are key to the laundry’s success, since the system is highly automated, ensuring correct processes per fabric type while reducing its chemical footprint. Before 2002, the Central Laundry used 4 gallons of water per pound of laundry washed. After upgrading the systems, it now uses 0.6 gallons per pound.

The Central Laundry also has worked to keep costs in check even with the new automation. Compared to costs in 1990, the laundry’s costs are only half a cent more per pound of laundry cleaned.

Bott says Intermountain Central Laundry works with organizations like Utah’s Department of Workforce Services and LDS Family Services to create a “pipeline” for people immigrating to the United States to help them gain employment, help them and their families get established and help them understand the things that they need to do, such as create bank accounts to have direct deposits. They also help people understand insurance and other programs as they’re trying to make the transition to the United States.

He adds that Intermountain has had success with people simply immigrating here from other countries and refugees that have come from different conflicts around the world.

“It ends up being a pretty good relationship all the way around because they come and they find a good employer that’s going to help them with the things that they need to get set up,” shares Bott. “Also, there’s not a high need for the work that we’re having them do to have them have a mastery of the English language. So, they can learn and grow as they continue to progress toward being citizens, and it ends up being just a good relationship.”

He says that many immigrant employees have served from 10 to 20 years, or more, at Intermountain, and the community sees it as a positive.

The Central Laundry has also been dedicated to being an asset in the area, helping communities throughout Utah. This includes no-cost laundry services for the Ronald McDonald House and the Annual Rotary Club Coat Drive.

“As our community is becoming more diverse, some of the things that maybe in the past we kind of thought we understood, we really don’t,” he explains. “So, I think it gives us a better look into where the community’s going, how the diversity numbers are changing and what we can do as a healthcare company to meet the needs. I think that’s a tremendous opportunity for Intermountain.”

There are also many things that Intermountain as a whole does to support the community with different donations and activities and support, according to Bott.

“There’s a big push to get ahead of causes of gaps in healthcare,” he says. “We’re looking to do things that are going to help keep costs low, helping people to get access is something they’re passionate about. We want people to get healthcare when they need it, to take care of things preventatively before there’s big cost for something that’s already on its way to being a full-blown health crisis.”

Intermountain and its Central Laundry have both grown over the years. They’ve grown with the community to serve it, and they’ve grown with diverse employment—a model operation for healthcare and laundry operations.

“One thing I think would be good is for folks who are curious is to come and witness it,” Bott says. “They should experience it so they can have an easier time how it might work in their situation.”