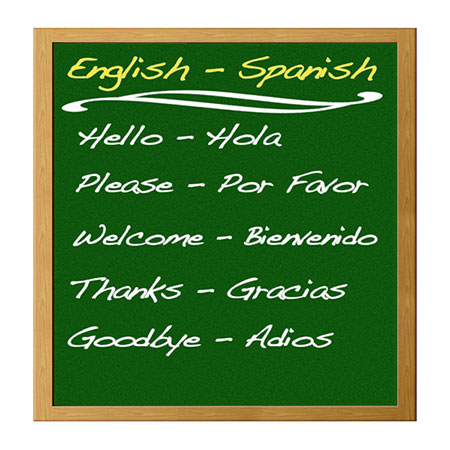 ROANOKE, Va. — It all started with my move to northern Alabama 16 years ago. I opened a new laundry that was located a number of miles from our traditional source of employees. In staffing that laundry, I saw an influx of Spanish-speaking workers applying for entry-level jobs.

Most were recent immigrants or documented aliens here to make a better life for themselves and their families. Like the immigrants of earlier times, they were seeking opportunity and access to the American dream by entering the labor market in entry-level jobs. I have found this group of employees to be reliable and very productive.

My first management job was at the LDS Hospital laundry in Salt Lake City, Utah, back in 1974. I was responsible for a shift of 45 employees, the majority of whom did not speak English. I had a large group of Polynesian employees from the Island of Tonga who spoke their native language; three to four who spoke Vietnamese; four who Spanish; and one who spoke Portuguese. Out of the entire crew, I was the only person who spoke English as the primary language.

I learned to train employees using the “show-and-do” method made popular by the Boy Scouts of America. First, I would show the employees what they were to do and then I would have them do it. I would correct errors in technique by example and would stay with employees until they could do the job correctly. Training in this manner is, in my opinion, far superior to just telling someone what to do.

I had several bilingual employees who helped explain company policies to the employees. I learned a few words in each language so I could say hello, thank you, and good morning or afternoon. I felt like I needed to know a little just to make them feel comfortable and welcome.

The current employment market makes it important that we broaden our search for good workers. A number of industries in my current location of Roanoke, Va., have started to court the non-English-speaking population. As the economy continues to grow in this area, the demand for entry-level employees will increase. This means as a manager I must also worry about the retention of all my workers.

I have learned several lessons the hard way about working with non-English-speaking staff. The first lesson is that you must quickly gain an appreciation for their cultural differences.

This was brought to my attention quickly in Salt Lake City when I began to work with Vietnamese workers. The normal hand gesture used to call someone over in our country—the uplifted hand with four fingers motioning toward your body—was a major insult to these people. It seems that in their culture, this is used only for calling dogs, pigs and cattle. Their normal hand signal is the hand straight in front of you, the palm down and the fingers flexed toward your body. A small difference to me, but a huge difference to them.

I also learned about the extended Polynesian family. I learned that there were basically only four major family names on the island of Tonga. As a result, it seems that everyone on the island was related in some form to everyone else. When I had to discipline one of my Polynesian workers, I hurt the feelings of them all. It was very important that I be overly fair and above reproach on everything I did or I risked losing 30 workers instead of one.

I learned that there are strong prejudices among what appeared to be homogenous groups. I learned that residents of each Polynesian Island believes that they are the only “true” Polynesians and the people from the other islands are inferior. It therefore would have been extremely difficult to hire a few Samoans to work in conjunction with the Tongans on my staff.

To facilitate the use of the available non-English-speaking workforce, we have offered a salary premium to all bilingual employees and an additional premium to individuals willing to serve as translators. This helps management effectively communicate with employees and resolve misunderstandings when they arise.

Our entire management staff has learned some basic words in each language so that we can make this group of employees feel comfortable and welcome in our laundry. Nine different languages are spoken in our laundry. We realize that our ability to communicate using these languages may have an impact on our ability to recruit and retain this workforce.

We have also started a school in our laundry for learning English as a second language. The instructor is paid by the laundry, but the employees attend on their own time. We have seen tremendous progress in the students’ language skills. Many of them have the goal of improving their ability to communicate and read English so they can apply for U.S. citizenship.

We believe our future success is dependent upon our ability to recruit and retain quality employees.