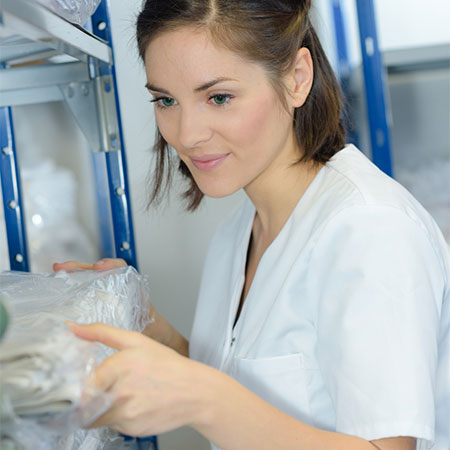 RICHMOND, Ky. — One of the most challenging aspects for laundry and linen services in a healthcare setting is linen hoarding.

Kevin Kunstman, CLLM, sales program specialist for Medline Industries, says linen hoarding can be anything from keeping excess linen in patient rooms to stocking nurse servers and then requesting additional linen after the cart is full.

“We see people keeping patient gowns in the warmer, and they don’t belong in the warmer,” he says. “The warmer should be specifically used for bath blankets.”

Kunstman says any place that staff puts linen that’s not a designated place for it could be seen as hoarding.

“I was in a facility doing an inventory, and we saw linens stashed in locked cupboards,” he says. “It wasn’t accessible to anybody, but they would put in there, lock it up and no one could access it. That’s dead stock that’s just stuck and not being utilized in the hospital.”

Other ways that linen is hoarded in a healthcare setting includes linen in patient rooms, extra carts that are hidden or requesting linen that’s not actually needed.

Hoarding can be countered in a healthcare setting by developing an organized, systemic approach to managing circulating inventory, doing so in an efficient and cost-effective manner, according to the specialist.

He started by going over the cause of linen hoarding: fear.

“The fear that they won’t have the linen they need when it is required,” Kunstman says. “Sometimes this is a rational fear, but other times, it’s unwarranted.”

The rational causes would be linen not arriving when it needs to be in the unit. Many times, if the delivery isn’t coming from the laundry at the proper time, the unit is running out of linen because it’s being distributed at the wrong time. Sometimes the units aren’t being stocked to the full, required par levels because they don’t have enough linen to stock those areas or they haven’t replenished their stock often enough to get the units through the day, he says.

Sometimes it’s an irrational fear due to problems experienced years ago.

“Many times, we’ll speak with nurses and they’ll tell us how something happened years ago,” Kunstman says. “Well, as long as you haven’t had that problem recently, it isn’t something you need to be worried about. The problems they experienced with linen shortages or not having what they needed sticks with them for a long time.”

To counter this fear and linen hoarding, Kunstman recommends a facility undergo a linen system review, perform a linen inventory, use linen management software, establish linen utilization policies and make sure everyone in the healthcare facility, from the top down, is educated about linen usage.

Kunstman says linen management software gives a facility the ability to track how much linen is going to every location in the hospital, to see how the linen is being utilized.

“It’s very easy to use most linen management software,” he says. “It’s user-friendly, with different menus and icons to navigate through the site.”

A lot of the software now has handheld data collection units, tablets, with the ability to easily record what’s going to different units of the hospital, according to Kunstman. It’s usually flexible and can be customized to specific needs. Reports can be seen on screen, e-mailed, printed, etc. He also says the software can offer graphs, performance measurements of how different units are functioning alone and compared to one another.

Why is there a need for linen management software?

“It helps you manage your supply levels and make sure there is adequate availability of the linen,” Kunstman says. “The goal with linen distribution is to have the right linen in the right place at the right time. We can reduce abuse and misuse. It can help eliminate and review late deliveries, and define what late is—making sure linen is distributed at certain times of the day. It can also help eliminate rush orders, panic buying.”

Linen management software removes perception from reality, according to Kunstman.

“Sometimes units are saying they’re always running out of linen, when really it only happened once or twice,” he says. “It helps to verify what they’re seeing, if it’s accurate or not.”

Kunstman says there are several key benefits to using linen management software. First, it can help reduce costs through inventory control, along with forecasting and planning purchases.

“If you’re going to bill departments for their linen consumption, it might help to get more buy-in from the right people so they’re spending less money themselves or saving the linen department money,” he says.

Another benefit is improving patient care and comfort by ensuring patients are getting the correct items for proper use.

Linen management software can also help enhance the image of the facility.

“If you’re able to make sure you have the right linen, and you’re ordering it on a regular basis, you never have to have any emergency purchases that are different items that don’t coincide with what you typically buy,” Kunstman says.

The most successful linen management systems involve a combination of two integral pieces, according to Kunstman: understanding the current practice by observation and linen utilization analysis, and then changing nursing/end-user practices and educating staff, emphasizing rational consumption of linen.

Rational consumption is using the right product, at the right time, in the right place, in the right amount. Essentially, making sure the linen is being used for what it’s designed for, when it’s needed, and only using what is actually needed.

“The software can suggest what they need to use linen for,” he says. “For example, if we see that they’re using a ton of towels per patient day, that would let us know maybe they’re using them for positioning, and we need to do some education on using them for the right thing.”

Kunstman says establishing par levels is very useful in having an appropriate linen management program, offering more control over the distribution process. It helps make sure enough linen is available to meet the needs of the department between deliveries for better inventory control and service levels.

“If we’re distributing to the same par level each day, it should give us the ability to know what we need to have stocked in our linen room and what we need to order to ensure you’re giving each of the departments the linen they need each day,” he says. “We can redistribute the current inventory and reduce purchases by taking linen from one area that may not need it to an area that does.”

Kunstman says healthcare facilities can manage linen usage through established policies and procedures. Scrub and garment control can be achieved through a scrub exchange program or scrub lockers.

He says a good reject linen policy is helpful. Have the laundry develop reject criteria and then educate nurses and laundry workers on the criteria to understand what linen is acceptable or not acceptable. He suggests posting reject linen criteria by the linen cart for reference, along with providing a place to collect questionable linen.

“Having a reject linen program makes sure linen unfit for use is being pulled out and you’re getting credit for that, or it could be used for different purposes, such as giving it to ambulance drivers,” says Kunstman.

“Anything that’s brought in should be used immediately,” says Kunstman. “Just bring in items needed to make the bed. In the bathroom, no towels stored there. It’s out of circulation, and it might encourage people to take it home with them.”

The final, key factor to curtailing healthcare linen hoarding, Kunstman says, is educating the end-user on the rational consumption of product.

The first line of education is staff orientation with consistent procedures.

“Making sure orientations include linen education is key,” he says. “You want to make sure you educate almost everyone in the facility, but most important are the nursing staff, and student nurses are going to be even more important, since they don’t have training or knowledge of how linen should be utilized.

“Make sure everyone is getting trained and no one is slipping through the cracks. Educate administration, EVS, distribution, anyone who is actually touching the linen should be educated.”

“They need to be educated, because linen choices are going to affect patient care,” he says. “It’s going to affect cost, maybe not them directly, but the overall cost for the hospital.”

Finally, Kunstman says continuous improvement is going to be very important for a healthcare facility to make sure what is being implemented is going to continue.

Miss Part 1 on the first steps to take? Click here to read it.