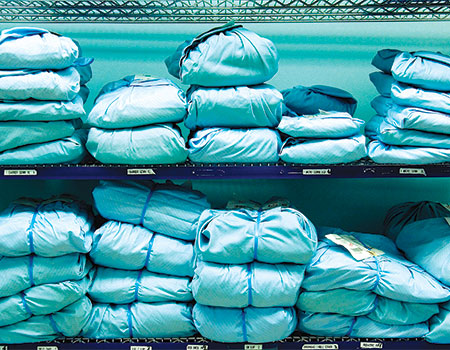 RICHMOND, Ky. — One of the most challenging aspects for laundry and linen services in a healthcare setting is linen hoarding.

Kevin Kunstman, CLLM, sales program specialist for Medline Industries, says linen hoarding can be anything from keeping excess linen in patient rooms to stocking nurse servers and then requesting additional linen after the cart is full.

“We see people keeping patient gowns in the warmer, and they don’t belong in the warmer,” he says. “The warmer should be specifically used for bath blankets.”

Kunstman says any place that staff puts linen that’s not a designated place for it could be seen as hoarding.

“I was in a facility doing an inventory, and we saw linens stashed in locked cupboards,” he says. “It wasn’t accessible to anybody, but they would put in there, lock it up and no one could access it. That’s dead stock that’s just stuck and not being utilized in the hospital.”

Other ways that linen is hoarded in a healthcare setting includes linen in patient rooms, extra carts that are hidden or requesting linen that’s not actually needed.

Hoarding can be countered in a healthcare setting by developing an organized, systemic approach to managing circulating inventory, doing so in an efficient and cost-effective manner, according to the specialist.

He started by going over the cause of linen hoarding: fear.

“The fear that they won’t have the linen they need when it is required,” Kunstman says. “Sometimes this is a rational fear, but other times, it’s unwarranted.”

The rational causes would be linen not arriving when it needs to be in the unit. Many times, if the delivery isn’t coming from the laundry at the proper time, the unit is running out of linen because it’s being distributed at the wrong time. Sometimes the units aren’t being stocked to the full, required par levels because they don’t have enough linen to stock those areas or they haven’t replenished their stock often enough to get the units through the day, he says.

Sometimes it’s an irrational fear due to problems experienced years ago.

“Many times, we’ll speak with nurses and they’ll tell us how something happened years ago,” Kunstman says. “Well, as long as you haven’t had that problem recently, it isn’t something you need to be worried about. The problems they experienced with linen shortages or not having what they needed sticks with them for a long time.”

To counter this fear and linen hoarding, Kunstman recommends a facility undergo a linen system review, perform a linen inventory, use linen management software, establish linen utilization policies and make sure everyone in the healthcare facility, from the top down, is educated about linen usage.

Kunstman says the purpose of the linen system review is to open lines of communication within the facility to learn the current status of linen distribution and usage.

“We want to observe the current practices and procedures so that we can get an idea of what is happening in the hospital and see how different units are utilizing the linen and the different problem points they may be having,” he says. “We want to create a proactive climate. We don’t want linen distribution and utilization to be reactive; we want it to be proactive so we can get on top of it before it becomes an issue.”

Besides distribution and usage, Kunstman says a linen system review can also quantify the different savings opportunities available and help determine par levels for different units, including the product they have to have on hand on a daily basis.

A system review, the specialist says, needs to have the support from administration, the director of nursing, the EVS director or executive housekeeper, and the food and beverage manager.

“We want to set up short interviews to determine challenging points and what they think is going well,” he says. “We want to focus on service issues. We want to know the issues and figure out ways to help improve. We want to evaluate their service perception: Does the linen arrive on time, what’s the quality, etc.”

Kunstman recommends focusing on usage and abuse issues to make improvements to those situations.

“We want to see how they are actually using linen, and possibly abusing it, such as throwing it away, hiding it, using for purposes aside from actual function,” he says.

Kunstman recommends having the hospital linen committee review the system review to allow them to understand the action items found and the improvements planned, and how follow-up will be conducted.

The key is to implement changes within 30 days of the system review.

“You want to make sure things are fresh in your mind,” he says. “The people you’ve spoken with are expecting to see some type of a change or improvement. To have that happen quickly is going to show good faith that you are trying to improve their processes and ensures that things are going smoothly for them.”

In addition, Kunstman recommends visiting departments weekly to ensure things are moving forward and that they are getting the changes expected.

A linen inventory is going to serve as a benchmark to keep linen loss in check, according to Kunstman, along with providing data for adequate supply levels and making sure linen services are fulfilling demands. It’s also going to assist with financial forecasting and planning to see how much linen is lost each year and forecast what needs to be reordered.

“With counting everything in the hospital and rotating in the laundry, it will show how many pars are in the department and can also indicate the dead stock,” he says.

“On occasion, if you’re going to be conducting an inventory, and you’re going to be back a short time later and you think some of the carts are way overstocked, a good trick is to stick a business card on one of the stacks. If you come back and the business card is still there, it will really solidify the fact that there’s a lot of linen not being used if the card never rotated to the middle of the stack.”

Kunstman says an inventory will allow dead inventory to be recirculated.

“You’re really taking a look at everything within the hospital,” he says. “You’re looking at where linen is kept, where in the cupboards, where it’s being stashed.”

Linen loss and accelerated replacement means money, and another benefit of a linen inventory is to show the total cash value of linen on hand.

Kunstman says this not only helps in budgeting, but also helps everyone in the hospital understand how much linen is circulating through the hospital.

“When you can tell staff how much linen is on hand in the millions of dollars, it really opens their eyes that it is a tangible good that has a value associated with it,” he says. “Linen gets thrown to the wayside and ignored because it just keeps coming. It becomes a problem when it’s not there when needed.”

An inventory allows a facility to see what par levels it has, compared to what it should have on hand, and inject pars if needed.

According to Kunstman, a linen inventory should happen at least once a year, and at about the same time each year.

“This helps ensure you are comparing apples to apples when evaluating losses and inventory levels,” he says.

Check back Thursday for the conclusion on management software, policies and education.