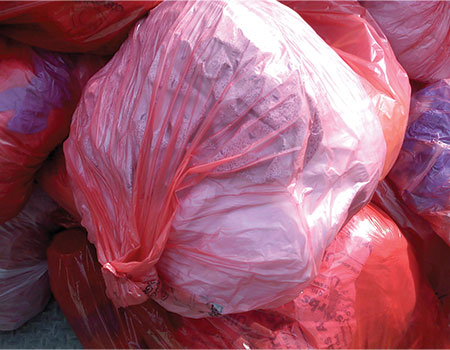 MISSION, Kan. — It’s a miracle really. Each day, modern laundries receive millions of pounds of dirty healthcare linen, wash it, and within 24 hours deliver clean linens back to their customers—hospitals, outpatient surgery centers, clinics and nursing homes—365 days a year in some cases, rain or shine.

The reliability of the textile services industry is such that it can be compared to utility companies that provide clean water or electricity. Customers need the product and expect uninterrupted service, but nothing upsets things more than a price increase! One could say customers take linen for granted. Providers are so good at what they do, and so reasonably priced, linen service has become “commoditized.” And therein lies the problem.

As 2014 begins, it is imperative to educate users on the proper handling of soiled healthcare linen and the value in doing so. Why now?

In an era of escalating costs and shrinking budgets, healthcare facilities inadvertently spend hundreds of millions of dollars each year to replace linen that is thrown away as trash or infectious, “red bag” waste. Then they pay waste haulers on a per-pound-basis to dispose of said trash in the nation’s landfills. The culprit? Lack of education.

The good news: There is a solution. We human beings have the ability to talk, listen and learn. We can change our behavior.

The bad news: It won’t be easy. As human beings, we tend to resist change. Our old habits die hard.

Because linen is typically undervalued by end-users, a substantial amount winds up in the trash. Because handling procedures for soiled healthcare linens are often misunderstood, linens may be disposed of as red-bag or regulated medical waste (RMW).

Healthcare laundry operators belonging to two trade groups, the Association for Linen Management (ALM) and the American Reusable Textile Association (ARTA), estimate that annually as much as 25% of their linen exits client locations as RMW. A survey conducted last summer of 200 nurses and healthcare professionals at five U.S. healthcare systems revealed that 95% had recently disposed of at least one linen item as red-bag waste.

In researching why soiled linen is winding up as red-bag waste, one factor becomes glaringly clear. Namely, among healthcare professionals there is widespread confusion over Occupational Safety & Health Administration (OSHA) regulations on the proper handling of healthcare linen contaminated by blood or bodily fluids. This confusion has caused many healthcare facilities to develop overly cautious policies and train staff to dispose of contaminated linen as red-bag waste.

Once it was understood that many end-users don’t understand what is or isn’t RMW, ALM and ARTA asked OSHA to clarify proper protocols for handling healthcare linen soiled with blood or bodily fluids. OSHA responded with a “Letter of Interpretation (Oct. 29, 2013).”

OSHA regulations specify that any linen saturated with blood or other potentially infectious materials (OPIM) should be placed in impermeable bags. A facility’s laundry provider then picks up the bagged contaminated linen, washes the linen, and delivers clean linen back for additional use.

OSHA’s letter of interpretation affirms these protocols for handling contaminated linen and goes further to specify that bags used to collect contaminated linen must be correctly labeled as containing biohazardous waste. Specifically, OSHA’s letter states: “The definition of ‘regulated waste’ does not include contaminated linens that will be laundered and reused.” 29 CFR 1910.10330(b). The word “waste” is defined as “garbage” or “trash.” Webster’s II New College Dictionary, 1995, p.1247 (definition 6).

Armed with OSHA’s recent letter, both associations are developing an industry education campaign to create greater awareness on the proper handling of linen soiled with blood or bodily fluids. In addition to sharing the information with healthcare associations and facilities, ALM and ARTA have developed teaching tools and posters to help launderers educate healthcare clients on the correct and less costly method for handling contaminated linen.

ONGOING EDUCATION IS THE ANSWER

“So many people in a healthcare environment touch linen, and unfortunately there is a huge lack of awareness regarding best practices for linen,” says Janet Howard, director of Facility Engagement for Practice Greenhealth (PGH). Practice Greenhealth (PGH) is a nonprofit organization formed to help hospitals reduce their environmental footprint, increase operational efficiency, and improve patient care. PGH has 1,200 member hospitals.

“The key is to provide ongoing education. You can’t just say it once; you need a person on-site who will champion the program, and you’ve got to continually repeat your message. People are human. They forget or may resist a change. Plus, you always have employee turnover, and new staff to train,” she says.

If education is the answer, how to begin? Share information on the correct handling of soiled linen with key stakeholders; gain their buy-in; educate them, other management and all staff; provide incentives; educate new hires; re-educate on an annual basis; and find champions to continue and carry the effort. If your organization doesn’t yet conduct regular Linen Day client education events, now is the time to begin.

PGH’s Howard shared her perspective on which key stakeholders should be involved in a linen awareness/red bag education initiative:

Ask if the facility has a program to reduce waste and biohazardous waste and/or a policy on waste segregation. If not, share why it should. (If improper materials are found in the landfill during an audit by your state department of health or environmental agency, they are much more lenient if they know you have a policy or an ongoing audit program in place.)

Identify who is in charge of auditing waste segregation. Some rely on a vendor while others have an internal person.

Make sure linen is on this person’s radar, because it may not be! In this way, you can ensure linen is on a facility’s audit list for segregated waste and/or waste reduction.

​Make sure linen is not included in its definition of RMW. Many are not aware that soiled linen is not waste—it’s reusable!

“There is a bias that linen can’t be cleaned when it’s extremely soiled or bloody. But it can, as anyone on the laundry side knows,” adds Howard. “Hospitals and their employees aren’t perfect. They need reminders, especially when it comes to best practices for linen.”

For those in the trenches trying to educate healthcare staff and affect new behavior—i.e., get healthcare professionals to stop trashing linen or disposing of as RMW—this may feel like an impossible goal. But it’s not. The effort will, however, require launderers and their client partners to engage in continuous communication and education on the issue. Again, this is not a one-month or one-year effort. After all, we are humans, as the theoretical physicist Stephen Hawking states:

“For millions of years, mankind lived like animals. Then something happened that unleashed the power of our imagination. We learned to talk and listen. Speech has allowed us to communicate ideas and work together to do the impossible. Mankind’s greatest achievements have come about by talking, and its greatest failures by not talking.”