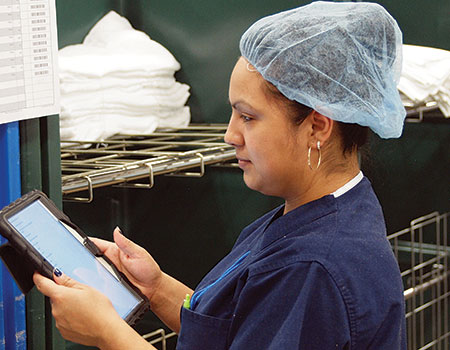 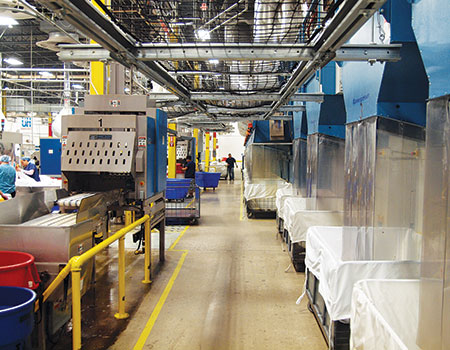 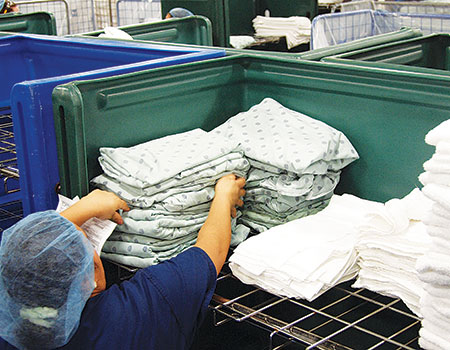 Co-op laundry was year from shutting down until new manager made it work, says current president/CEO

Ed McCauley, who has been president and CEO of UHS since 2002, knows the story well.

“The previous gentleman [James Hunt] that was running this facility before I got here was here for 27 years,” McCauley says. “He was hired to shut the place down, to get out of contract with everybody because it wasn’t working.

“He said, ‘You know what, guys, this just needs good management. You can make a go of this.’” McCauley says the company listened to Hunt and gave him one year to turn UHS around.

It’s the quality of UHS management staff that McCauley cites as the reason for the company remaining in business to this day.

“Why did we stay in business? Good management always comes up,” he says. “You always got to say it’s the quality of the management staff here.”

McCauley says he’s done research into the founding of the company, which put its business articles together in 1964 and opened its doors in 1966.

At that time, there were three other cooperative laundries in the country—one in Baltimore, one in Boston and one in Los Angeles.

“United Hospital Services is the one that remains in business today out of the original four cooperative laundries,” McCauley says.

McCauley says the difference between UHS and other companies of similar size is that the others might be using three separate plants to get its work done, whereas UHS has a single plant.

“It’s not terribly different,” he says. “I just think if you’re organized properly within your facility, and you have enough systems in place, ordering systems and software systems and production control systems, all of these different things you have in place, now you’re ready to take on more business and to properly service the business you have.”

The plant UHS uses today opened around 1994. It has more than 115,000 square feet of space, with four tunnel washing systems, McCauley says.

The equipment is a mix of old and new, he says. UHS has a fairly aggressive capital project list every year to look at equipment and see what needs to be upgraded.

“For instance, in about 2008, we bought a new tunnel system,” says McCauley. “Three tunnel systems are original equipment, while one was new as of 2008. There’s a lot going on every year as far as equipment.”

In about 2010-11, the company put a new hanger system in, he says, and for the past three years, it’s been redoing a lot of its ironer systems. He says UHS has one ironer fitted with a camera system for quality control and in 2017 is going to outfit all of its ironers similarly.

“We pride ourselves on the quality side of the business,” says McCauley.

The company processes more than 38 million pounds of linens a year with all of that equipment. And UHS only needs one 10-hour shift, six days a week, to get the work done in a timely manner, with quality results.

But that changed in January, according to McCauley. He says the Indianapolis plant added a second shift because of growth, which will reach 47 million pounds processed. In total, the plant will employ 275 individuals.

Of course, with so many clients and so many pounds being processed, UHS has a backup plan in place in the event of a disaster.

McCauley says UHS has five or six backup laundry service contracts in place with other laundries. By contract, those laundries must help UHS with X number of pounds in X number of hours.

“We must also do the same for them in their hour of need,” he says.

While the company has a good backup plan in place today, that wasn’t always the case. McCauley says that just a few months after he joined UHS, the building was hit by a tornado.

“It came to light how ill-prepared we were for a catastrophe,” he says. “The good news is it hit 3 o’clock on a Friday afternoon, so all we really missed was Saturday and we were back up and running Sunday. But in the meantime, we were scrambling to find other laundries to help do the work.”

UHS has also learned what works best for the company when it comes to pickup and delivery of soiled and processed goods. McCauley says the company leases its fleet of vehicles from Penske.

“It’s probably not the cheapest way to go, but it certainly is the most convenient,” he says. “We are not experts in truck maintenance, so we allow the experts to do that kind of thing. Just like the hospitals allow us, the laundry and linen experts, to do their laundry and linen for them, we let Penske do that for us.”

At the end of 2016, UHS purchased a double-decker trailer for use on long routes, says McCauley.

“We have to travel two-and-a-half hours, one way, for some of our hospitals, so we’ve found that the double-decker trailer is the way to go for that,” he says.

Just like the company continually upgrades its equipment and delivery options, UHS continues to look for growth opportunities in its business, McCauley says.

In 2005, UHS switched from a nonprofit to a for-profit company. He says the shift made sense because the company simply wasn’t doing many of the things that were put together in the ’60s for its 501(c)(3) status.

“They would have to do with simple things like the general manager of the facility must be an active employee of one of the hospitals, something like that,” McCauley says. “We had all these little things that when it was put together didn’t make sense anymore because we had grown, the hospital markets had changed over the years and so on and so forth. We felt that it was time to basically get out of the 501(c)(3) status and move toward a cooperative where the hospitals actually owned a piece of United Hospital Services.”

The process wasn’t easy, McCauley says, but after “a lot of legwork and lawyers,” UHS became a for-profit business.

“As an LLC, I can have an unlimited amount of for-profit business,” he says. “An LLC is basically what’s known as a ‘pass-through’ organization. A pass-through organization passes either profits or losses to the owners, and the owners basically have to record profits and the losses of the organization on their books. So, it didn’t matter if we made a profit.”

UHS is working on its next area of growth in terms of warehousing and distributing goods. In Bloomington, Ind., the company opened what McCauley calls a depot. The warehouse/distribution center will aid the company in servicing clients located up to two hours away from the central plant.

He says plans are in the works for a second depot in north-central Indiana.

“These are going to be depots where we will take linen in bulk and break them down; if they go on exchange carts, we’ll do it up there,” he says. “We’ll do all of the local delivering out of these depots, whether it’s in Bloomington or up north, wherever.”

The Bloomington site has been in operation for approximately six months, McCauley says. The depot in north-central Indiana will be up and running early this year.

“We’re able to do that because, again, we’re leaders in the industry with an excellent management staff and we’re growth-oriented,” McCauley says.