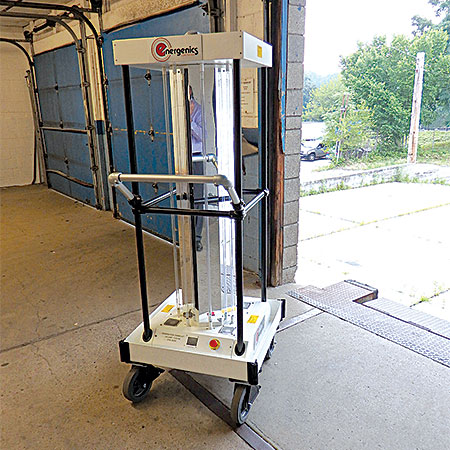 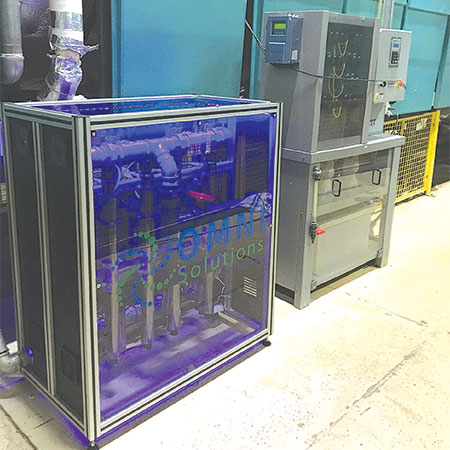 UV light making its way from other industries into laundry operations

CHICAGO — Ultraviolet (UV) light is a natural disinfectant. It destroys bacteria that it comes in contact with.

Paul Jewison, president and CEO of Textile Care Services, a healthcare laundry in Rochester, Minn., has been using UV technology as a disinfectant for close to two years.

“This ultraviolet system is a game changer,” he says. “It’s overkill because the light is on continuously. It can move all around the laundry.”

However, only in recent years has the laundry industry begun to embrace the disinfecting properties of UV.

“Many other industries have been using this technology, and have been for decades,” says Andrew Rupnow, founder and chairman of OMNI Solutions, which provides laundry cleaning and sanitization solutions and technologies. “It just has never been applied to the laundry industry.”

Jewison started using UV when he helped Rupnow create a system that works on tunnel washers.

The two met at the 2016 Association for Linen Management (ALM) IMPACT Conference in Arizona. After talking about the system, Jewison decided to get involved.

“He brought it over to my plant, and we started developing a way to take ultraviolet light and apply it differently than it has been in the past,” Jewison says.

So, how does UV light disinfect? UV comes in different wavelengths, and the 254-nanometer light kills surface bacteria and can disinfect water.

“When you look at the performance of ultraviolet light against this long list of bugs, it’s staggering the amount it can kill,” Jewison says. “It’s up to 99%.”

Schulze adds that the use of UV light is effective, consistent and repeatable. It will help maintain an acceptable level of microbial load based on a laundry’s hygienic standards and monitoring program.

Theoretically, there are several points of application for UV in a laundry. One such use in the industry is as a surface disinfectant.

Energenics makes a mobile surface disinfectant unit called UV-MAX, which Schulze says is most commonly used at the loading dock to disinfect linen transport vehicles prior to loading with clean products for return to the customer.

“The unit is placed in the back of the truck with the door closed and zero exposure to the operator,” he says. “Treatment times are determined by desired results. Customer feedback indicates the process can take as little as three minutes when used on a consistent basis.”

Schulze adds that UV can be used anywhere in a laundry where microbial surface contamination is a concern. This includes clean rooms, soil-sort areas, bathrooms and lunchrooms.

“Zero exposure to operators and employees must be maintained when considering application,” he cautions. “It’s important to note that UV is ‘line of sight’; therefore, shadowing must be considered.”

Besides the mobile unit for surface disinfection, Schulze says UV technology has been available as an option on two of the company’s standard products for some time. First, on the Kartwasher as a secondary treatment option.
It’s also available on Ambient Air Lint Filters (AALF) to disinfect the lint prior to collection for sanitary disposal.

Rupnow says the system makes use of the 185-nanometer band of UV light to create ozone gas, which is a strong oxidizer. The system combines peroxide with the ozone to create a product called peroxone. When that compound comes into contact with 254-nanometer-wavelength UV light, it creates hydroxyl radicals, which are a strong oxidant for the disinfection process.

“Our background is taking this technology that’s been proven over decades and applying it to the laundry industry for treating water and also textiles,” he says.

Rupnow says using the system to treat press water reuse allows the operator to reuse more of that water without losing integrity in the linen.

“If you didn’t use this type of system, you would build up a biofilm in that laundry process, and potentially the linens would start graying and stinking,” he says. “By using the technology, you can use more of the water, provide a better product for customers, whiter linen, and reduce odor and water consumption.”

On a tunnel washer, the press water is usually pumped up to the front. Rupnow says the system intercepts that line, takes the press water and runs it through the UV system, and puts it back into the rinse zone.

On a conventional washer, Rupnow says there are two points of application. First is treating the incoming cold water with UV before it enters the washer. Second is to place it on the flush manifold of the chemical system.

“What that does is not only cleans the water, but it also enhances the chemicals for better cleaning during the wash process,” he says.

How effective is the UV system? Rupnow says third-party studies and tests done for customers shows the reduction of bacteria anywhere from a 90% to 99% reduction in colony-forming units (CFU).

In addition, Rupnow says the systems installed so far have been proven to save on water consumption and gas usage, because reusing the press water lessens the need for fresh water, and since the press water is warm, less gas is used
for heat.

While UV light is a proven, effective disinfectant, Schulze cautions that laundry operators shouldn’t see it, alone, as a “silver bullet.”

“It’s most effective when used in conjunction with other disinfectants, like the chemicals you are using now,” he says. “UV becomes the workhorse of your hygienic cleaning program in addition to providing consistency and repeatability.”

With basic training, a laundry operator can gain confidence in the technology and understand its limitations, according to Schulze.

“The UV technology, it’s been in other industries, and now it’s coming into the laundry industry,” Rupnow concludes. “It’s setting new standards. It’s here to stay.”