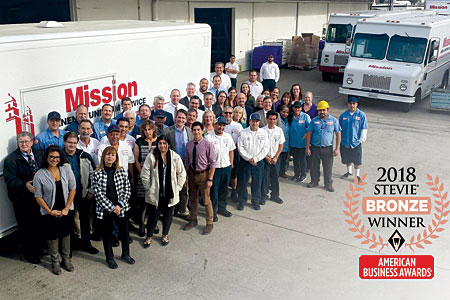 The competition drew more than 3,700 nominations across various categories.

“The nominations submitted for the 2018 American Business Awards were outstanding,” says Michael Gallagher, president and founder of the Stevie Awards. “The competition was intense, and those recognized as Stevie Award winners should be immensely proud of this accomplishment.”

Mission says it was recognized for its commitment to going above and beyond for its customers, community and the environment.

For example, in 2017 alone, Mission says its sustainability efforts saved 141 million gallons of water and 1,030,000 kWh of energy. Additionally, the company expanded its selection of linens, uniforms and supplies to offer a better fit for the unique needs of each customer and opened a new, LEED-certified plant in Newark, Calif., to provide faster service for customers in the Bay Area.

Mission says it also provided numerous new jobs throughout the western United States and donated countless linens and supplies to charitable causes to make a positive impact in the community.

“At Mission, our goal of always doing more for our customers, communities and environment drives each and every decision we make,” says John Ross, Mission’s president and CEO. “We are honored to have our efforts recognized, and we are already identifying ways to do even more in 2018 and beyond.”

The American Business Awards are the United States’ premier business awards program, according to Mission. All organizations operating in the country are eligible to submit nominations—public and private, for profit and nonprofit, large and small.

Mission and the other Stevie Award winners were recognized at the American Business Awards gala on Monday, June 11, at the Marriott Marquis Hotel in New York.

In addition to this Stevie Award, Mission recently received the City of Santa Barbara’s 2018 Water Hero Award for its water conservation efforts, a silver 2017 Best in Biz Award in the Most Environmentally Responsible Company of the Year category, and a Sustainability Leadership Award in the Business Intelligence Group’s 2017 Sustainability Awards program.