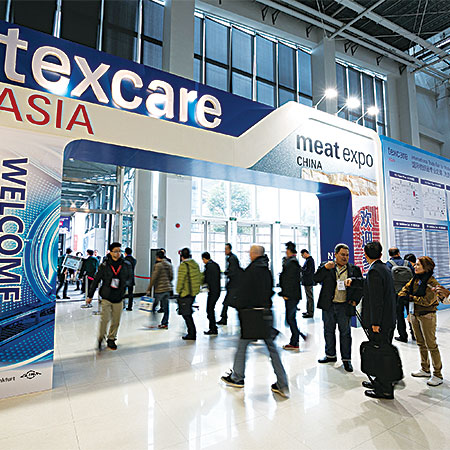 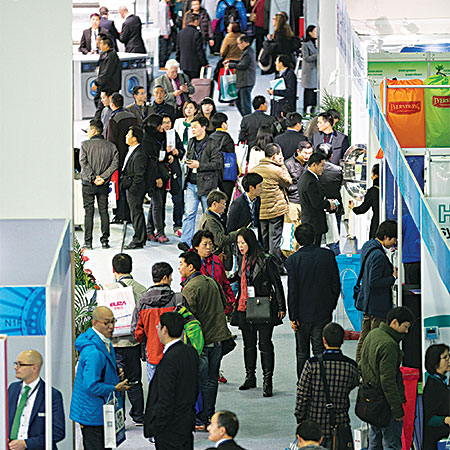 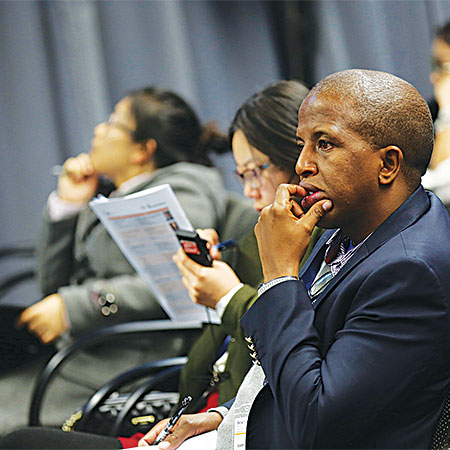 Organizers say most of the exhibit space has been sold

Better known as Texcare Asia, it will be headlining at the center for three days, Sept. 27-29.

“Over 95% of exhibition space at Texcare Asia is booked to key international and domestic players,” says one of the two show organizers, Messe Frankfurt (Shanghai) Co. Ltd.

According to Messe Frankfurt, and co-host China Light Industry Machinery Association (CLIMA), the show is drawing a “wave of elevated enthusiasm,” and adds that international industrial associations have recommended the fair to players from around the world.

“Wave” is the right description for the Shanghai event since the city name itself means “upon the sea.” It is a large, cosmopolitan coastal metropolis of 25 million.

During the 2015 edition of the trade show, 153 exhibitors filled almost 183,000 square feet in the Shanghai New International Expo Centre. Attendance reached a record 10,267 from 54 countries. Organizers say the 2015 show experienced a 20% increase from the 2013 edition, and expect further growth this year.

Attendance this year is expected to reach 11,000, with more than 160 exhibitors showcasing their products and services in more than 215,000 square feet of space.

Local companies from China will be represented, plus businesses from 20 other countries, including the United States, the United Kingdom, Australia, France, Italy, Japan and more.

By showcasing their product advancements to major Asian buyers, many of these global companies are wanting to capitalize on the fair’s position as Asia’s leading event for innovations in textile care.

“While the demands on laundry service in Asia are increasing rapidly, there’s also an emerging need for more personalized and diversified service,” he says. “In recent years, a number of industry players have made significant progress on automation and innovations to cater to these needs, under the backdrop of increased operational expenditure and raised environmental awareness.

“At the same time, the global industry is catering to these growing needs, by exploring the ways in which their advanced technologies can be adopted by the Asian market.”

Numerous dedicated areas will highlight the growth potential of these Asian markets.

Demonstrating the spirit of internationalism of exhibitors at this year’s fair, both Kannegiesser and Miele will be part of the German Area during Texcare Asia. This dedicated section gathers 10 leading players from Germany to demonstrate their role in serving the Asian market, and includes BÖWE, Hohenstein and SEITZ, and more.

Similarly, a dedicated Japanese Area will bring together a group of key Japanese brands, including ASAHI, San-Ai, TOTO, Y.A.C. and Yamamoto. Sankosha, also exhibiting in the Japan Area, is a laundry and drycleaning technology manufacturer that is set to launch more than 10 new types of shirt-pressing equipment during the show, organizers point out.

Sankosha says each of these technologies have been tailored to serve the Chinese market by offering specific shapes and angles in accordance with the country’s buying habits.

In the buildup to this year’s fair, the company has called for an increased focus on more automated and energy-saving shirt-washing technologies for the Chinese textile care sector, it relates.

The track-and-trace capabilities of RFID technology significantly increase the visibility, accuracy and efficiency at washing workshops, by automatically tracking the status of each garment and preventing items from being lost, show organizers indicate.

In this zone, for instance, technology company Datamars will demonstrate to visitors how the company’s own RFID solutions can help laundry shops save on operational costs and gain efficiency throughout the entire cycle.

“Laundering technology company Kannegiesser, who is a global player in the heavy-duty laundry machinery market, will be showcasing various smart and automated laundry advancements, in a bid to match the growing desire for more technological adoption and improved efficiency in the region,” show organizers say.

Milena Vogt, assistant to director of project engineering for Kannegiesser, says the company appreciates the transformation of the region toward high operational efficiency and energy savings.

“Utilization of automated process technologies and hygiene aspects are of great importance to the professional laundry companies in Asia,” she says. “We appreciate the growing interests in automated laundry solutions in recent years.

“Texcare Asia is one of the most important laundry exhibitions in China, as well as for the entire Asian-Pacific region. As the demand increases in the Asian market, we always participate in the fair to showcase our innovation, and of course, to get in touch with existing customers and to reach out to more business potentials.”

What’s more, fellow German exhibitor Miele, a commercial laundry technology developer, is also hoping to explore the potential of the Asian market at the show. The company has the capabilities to offer operational efficiency and reduced costs, which is another important factor for the domestic market, show management points out.

“Moving to its ninth edition, the fair will continue to be a one-stop sourcing and networking platform for the Asian community,” says Li.

In addition to the trade show, organizers will host Texcare Forum Asia at the same time. This educational experience allows attendees to hear from experts and market leaders from research institutes on a variety of topics of interest.

Texcare Asia is a biennial event and also a sister event of Texcare International, which is held every four years in Germany.