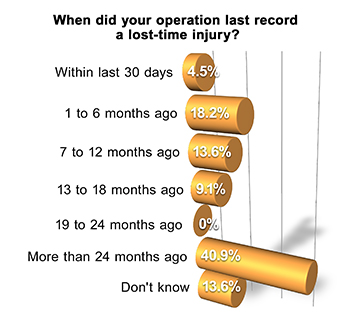 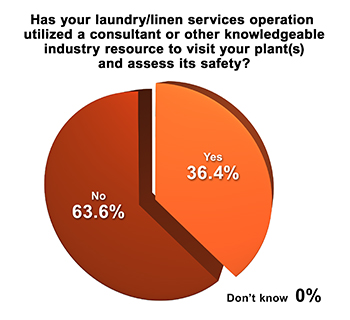 CHICAGO — Workplace safety remains a top priority among institutional and industrial laundry managers and administrators, based on data from this month’s American Laundry News Wire survey.

For roughly 41% of respondents, it’s been more than 24 months since they last recorded a lost-time injury—a nonfatal traumatic injury that caused any loss of time from work beyond the day/shift during which it occurred—in their operation.

Roughly 14% of respondents said they “don’t know” when the last lost-time injury was recorded in their operation.

The vast majority of laundry managers and administrators polled—90.9%—report that they provide safety training/testing as part of a new employee’s orientation to their laundry/linen services operation, as well as continuing safety education or training for workers.

“Proper body mechanics and safety lock-outs are the most important things for us,” says one respondent to the anonymous survey. Another describes the structure of his/her workplace safety program, saying, “We have a corporate safety manager, and each plant has a safety officer.”

Have you ever sought assistance from a consultant or other knowledgeable industry resource to visit your plant and assess its safety? Only slightly more than one-third of respondents (36.4%) to this month’s survey say they have sought such help to make their laundry/linen services operation safer.

A blocked electrical panel was the nature of one violation that drew a fine. Another manager explained that his/her operation’s citation stemmed from having “no tool rest on a grinder.”