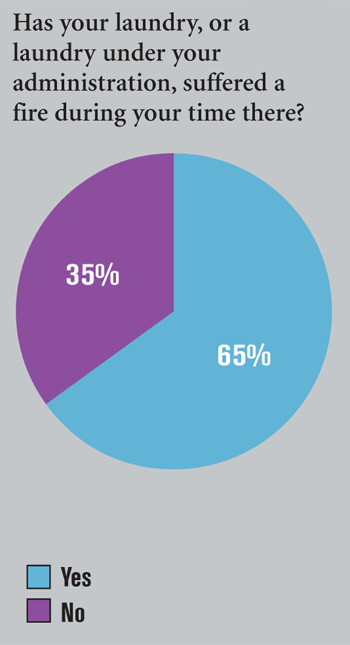 CHICAGO — Two-thirds of laundry managers and administrators responding to August’s Wire survey say their laundry, or one that they oversee, has suffered a fire during their tenure.
Approximately 43% of respondents say their most recent fire began in a dryer. A cart containing textiles was the point of origin for 28.6%, followed by the catchall “other” at 21.4%. Among starting points in the “other” category were wet mops, a monorail sling, and a large-capacity conventional washer.
Just 7.1% reported their most recent fire started in an ironer. No one who took the unscientific survey chose the chemicals system or the laundry structure as the starting point.
In 57.1% of the fires, there was little or no damage caused. Equal portions of 21.4% reported their laundry suffered either moderate or major damage.
Forty-five percent of respondents reported that their laundry has had a fire drill in the last six months, followed by 25% within the last month, 15% within the last year and 5% more than a year ago. The remaining 10% of respondents were unsure of the date of their last fire drill.
What aspect of their operation has the most worrisome fire potential? It’s laundry equipment for 50%, followed by “other” for 20%, textiles for 15%, the boiler or water heater for 10%, and the structure for 5%. No one who took the survey finds chemicals to be the most worrisome aspect.
Three-quarters of respondents believe their facility is safer today than it was when the fire occurred. Roughly 13% say it is not safer today, and the remaining 12.5% are unsure.
While the American Laundry News Wire survey presents a snapshot of readers’ viewpoints at a particular moment, it should not be considered scientific.
Subscribers to American Laundry News’ Wire e-mails—distributed twice weekly—are invited to participate anonymously in a brief industry survey each month. While it presents a snapshot of readers’ viewpoints at a particular moment, the survey should not be considered scientific.
The entire American Laundry News audience is encouraged to participate, as a greater number of responses will help to better define operator opinions and industry trends.
Click here and follow the menu instructions to sign up for the free e-mail service.