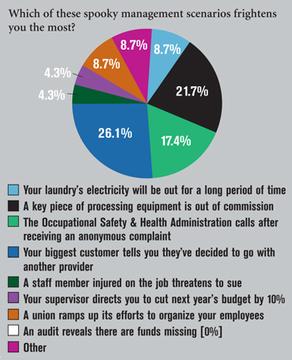 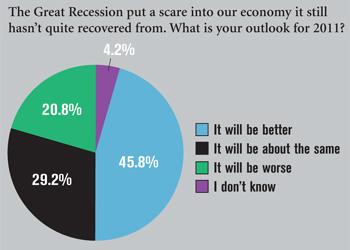 CHICAGO — During Halloween time, scaring someone is often done in the spirit of fun. But there are plenty of frightening scenarios that would be no fun at all for a laundry manager or textile rental operator. So, American Laundry News surveyed its Wire subscribers about what gets their hearts pounding.
Any number of situations could give a laundry/linen manager the chills, but the scariest, according to 26.1% of respondents, is if their biggest customer would decide to go with another provider.
Running a close second is having a key piece of processing equipment out of commission (21.7%). Receiving a call from the Occupational Safety & Health Administration (OSHA) after the agency has received an anonymous complaint was deemed scariest by 17.4% of respondents.
Other scary scenarios receiving multiple votes were the laundry’s electricity being out for a long period of time and a union ramping up efforts to organize laundry employees.Wire subscribers had the opportunity to share the most frightening thing to have affected their laundry, and here are some of their anonymous responses:

The Great Recession put a scare into our economy it still hasn’t quite recovered from, but 45.8% of respondents believe that 2011 will be better than 2010. Approximately 29% believe it will be about the same, while 20.8% think it will be worse. Roughly 4% say they don’t know.
While the American Laundry News Wire survey presents a snapshot of the trade audience’s viewpoints at a particular moment, it should not be considered scientific.
Subscribers to American Laundry News’ Wire e-mails—distributed twice weekly—are invited to participate anonymously in a brief industry survey each month. While it presents a snapshot of readers’ viewpoints at a particular moment, the survey should not be considered scientific.
The entire American Laundry News audience is encouraged to participate, as a greater number of responses will help to better define operator opinions and industry trends.
Click here and follow the menu instructions to sign up for the free e-mail service.