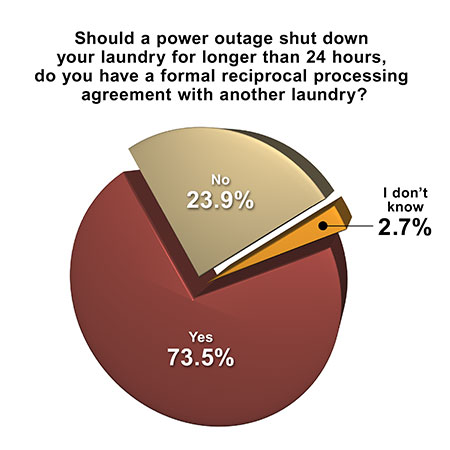 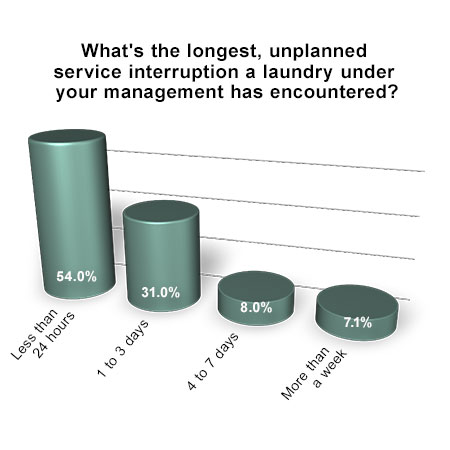 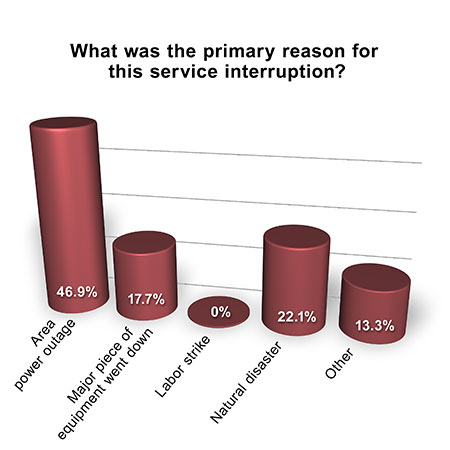 CHICAGO – Many laundry operators and administrators have a backup plan in place in the event of a temporary shutdown, according to results of this month’s American Laundry News Your Views survey.

When asked if they have a “formal reciprocal processing agreement with another laundry” in the event of a power outage, almost three-quarters of respondents (73.5%) say that they do, while 23.9% say they do not. A small share was unsure if they had such an agreement (2.7%).

“Major utility outages are covered with reciprocal agreements and/or informal agreements with other laundries,” says one operator. “Equipment redundancy is critical to compensate for major equipment downtime.”

Every laundry operator surveyed has experienced an unplanned service interruption in his or her facility, with more than half (54.0%) experiencing a delay in service of less than 24 hours, 31.0% of one to three days, 8.0% of four to seven days, and 7.1% of more than a week.

The primary reason for these service interruptions, according to roughly half of respondents (46.9%), was an area power outage. Another 22.1% say it was due to a natural disaster. Other causes were major equipment shutting down (17.7%) or other problems such as fire, construction and even water contamination (13.3%). No one who took the survey blamed a service interruption on a labor strike.

Roughly 68% of operators have had their facility assist another by temporarily supply textile services.

While some operators use a reciprocal agreement with another laundry in times of a temporary shutdown, another operator says, “[Keep] inventory levels where they need to be. I have a five-day par level to cover weekends, holidays and breakdown if needed.”

“If a major breakdown happens, you need good communication from the laundry manager to the customer,” says another operator.