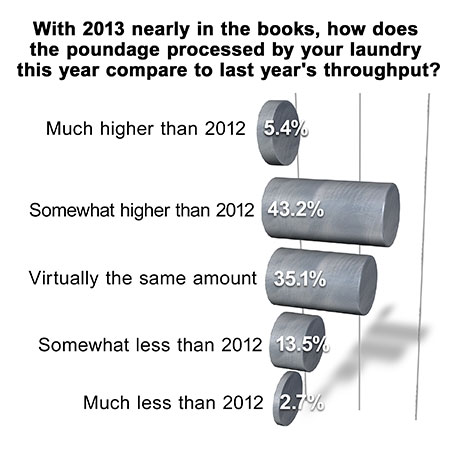 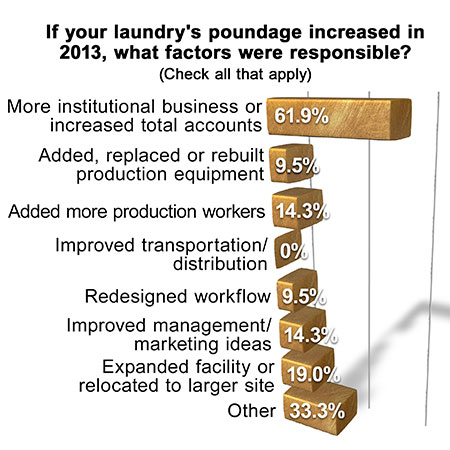 CHICAGO — The majority of institutional, commercial and industrial laundry operators report processing more laundry this year compared to last year, according to results from this month’s American Laundry News Your Views survey.

Laundry managers taking the survey estimated their operation’s overall 2013 production to be up about 1.4% compared to 2012. Respondents’ total estimated poundage for 2013 ranged from 75,000 pounds to 107 million pounds.

Roughly 62% attributed their increase in poundage processed to “more institutional business or increased total accounts,” while one-third (33.3%) attributed the increase to “other” factors, like higher hotel occupancy rates, or providing “new products to existing customers.” (Respondents could choose any or all from among a list of eight factors.)

An even 19.0% say the increase was because they “expanded [their] facility or relocated to a larger site,” while equal shares of 14.3% say it was because they “added more production workers,” or “improved management/marketing ideas.” Roughly 10% pointed to a “redesigned workflow,” while another 9.5% say they “added, replaced or rebuilt production equipment.” No respondents attributed the increase to “improved transportation/distribution.”

Equal shares of 7.7% say they were unable to meet 2013 goals because of “regulatory changes,” “marketing efforts,” “administration indifference or lack of support,” “productivity of staff,” or “capabilities of equipment.”

No respondents say they fell short of meeting goals because of “maintenance efforts.”