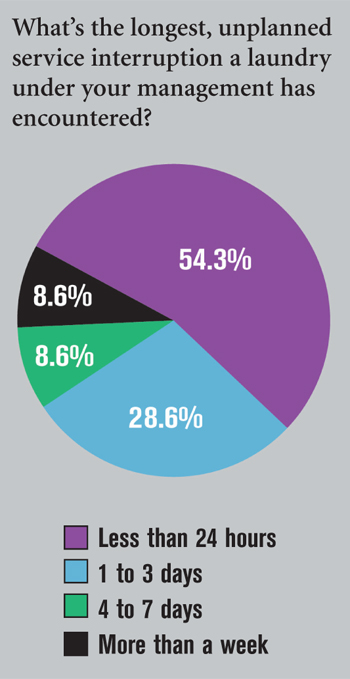 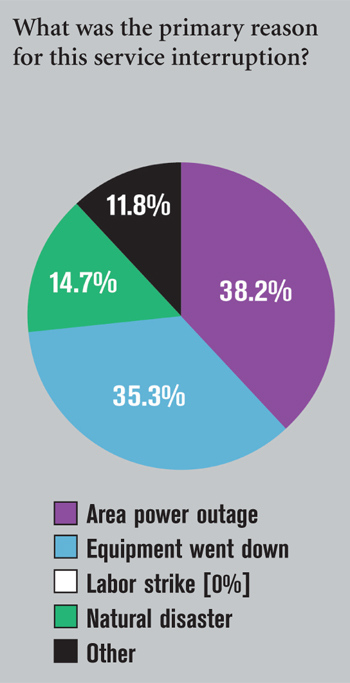 CHICAGO – Summer usually brings stormy weather and sometimes flooding, which can cause consternation for the laundry manager or textile rental operator who has to cope with a power outage, blocked road, or another obstacle to keep his or her laundry running.
Nearly three-quarters of respondents to American Laundry News’ unscientific Wire survey in June say they have a formal reciprocal processing agreement with another laundry that will provide textile services to their customers or end-users until operations are restored.
Approximately 38% of respondents say their business or institution utilizes a backup power source that keeps their laundry operational while others in the immediate area may be down.
More than half of respondents — 54.3% — say their longest, unplanned service interruption lasted less than 24 hours. Another 28.6% saw their laundries down from one to three days. Equal portions of 8.6% say their laundry services were interrupted for four to seven days or for more than a week.
An area power outage (38.2%) or a major piece of equipment going down (35.3%) was the primary reason in most service-interruption cases cited by respondents. A natural disaster attributed to 14.7% of service outages, and the catch-all “other” attributed to 11.8%. No respondents say their operation had been halted by a labor strike.
One respondent remembers a 20-million-pound plant going down due to an ice storm. “It took us all day to get a generator, but the next three days we had [to] run part of the plant and then turn equipment off so we could run the other part. It was challenging.”
Another respondent reports having added contingency hookups for the steam boiler and air compressor in case either goes down. “With these hookups in place, we can get a rental unit on-site and have the plant up and running with minimal downtime.”
A linen services manager who doubles as safety director at his Southwest medical center warns that you can’t prevent disasters but you can prevent service interruptions by having a plan. He suggests that every linen services agreement include a disaster plan.
Approximately 55% of respondents say their operation has assisted another by supplying textile services temporarily.
Subscribers to American Laundry News’ Wire e-mails—distributed twice weekly—are invited to participate anonymously in a brief industry survey each month. While it presents a snapshot of readers’ viewpoints at a particular moment, the survey should not be considered scientific.
The entire American Laundry News audience is encouraged to participate, as a greater number of responses will help to better define operator opinions and industry trends.
Click here and follow the menu instructions to sign up for the free e-mail service.