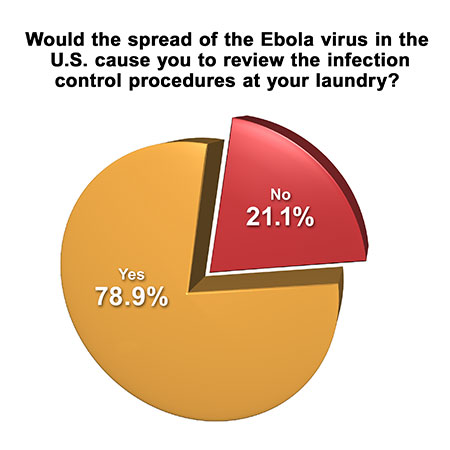 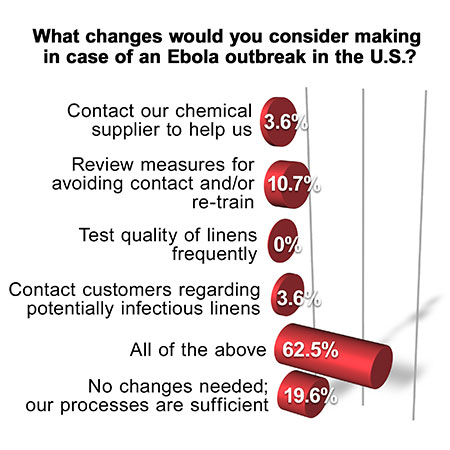 CHICAGO — If the Ebola virus were to spread to the U.S., it would prompt a review of the infection control procedures at the laundries of almost 80% of September’s American Laundry News Your Views survey respondents.

Regarding changes that laundry/linen managers would consider making to better protect workers and customers in case of an outbreak of Ebola, equal shares of 3.6% point to contacting their chemical supplier for advice or contacting customers to be sure communication is open regarding potentially infectious linens. A little more than 10% say they would be prompted to take a closer look at measures for helping employees avoid contact with soiled linens and re-train them where necessary.

The majority, however, don’t want to take any chances: 62.5% say they would take all three actions if the Ebola virus spread to the United States. But 19.6% believe their current processes are sufficient, and no changes are needed. No respondents say it would be necessary to test linens frequently to check for quality levels.

“Unfortunately, we will be very reliant on our customers to keep us informed of what we are handling,” says a respondent. “Most are not good at special handling when it comes to the linens—their answer is to throw it away.”

“Educate all staff members, then [do] re-training on a quarterly period through video and reading material. Also, I would include this training for newcomers’ orientation,” another respondent says.

Agencies and non-profits—such as the Centers for Disease Control and Prevention (CDC), the Textile Rental Services Association (TRSA) and the Association for Linen Management (ALM), for example—are sources of information for how to handle potentially infectious linens, according to nearly three-quarters of survey respondents.

“I believe the word ‘procedure(s)’ is widely overused in our industry as a term that makes us feel safe and combats red tape,” comments another respondent. “As managers, we can write and implement procedures. That’s a great answer for the authorities. Truth is, if we haven’t trained our staff, inspected the product and continue to monitor our facilities, then we haven’t really done anything. “

When asked whether they thought outbreaks of contagious diseases like Ebola would pose problems for linen services in the future, respondents were virtually split: 45.5% thought so, while 54.5% thought otherwise.

“I remember when AIDS was the ‘new’ epidemic and people were worried about soiled linens,” a respondent comments. “When we understood that standard precautions were sufficient to handle those linens, fear and worry ended. The same process will happen with Ebola.”

Concerning the Americans stricken with Ebola who were brought back to the U.S. for treatment, 48.2% believe the action was appropriate, while 21.4% disagree with the decision. A little more than 30% say they’re not sure whether it was the best course of action.

“Would anybody in their right mind want to transport a defective and leaking atomic bomb to their home to try to defuse and contain it, when you have everything needed at the location or would be able to transport it to that location?” a respondent asks. “I think not. What is the difference?”

While the Your Views survey presents a snapshot of readers’ viewpoints at a particular moment, it should not be considered scientific; due to rounding, percentages may not add up to 100%. Subscribers to American Laundry News e-mails are invited to take the industry survey anonymously online each month.

All managers and administrators of institutional/OPL, cooperative, commercial and industrial laundries are encouraged to participate, as a greater number of responses will help to better define operator opinions and identify industry trends.