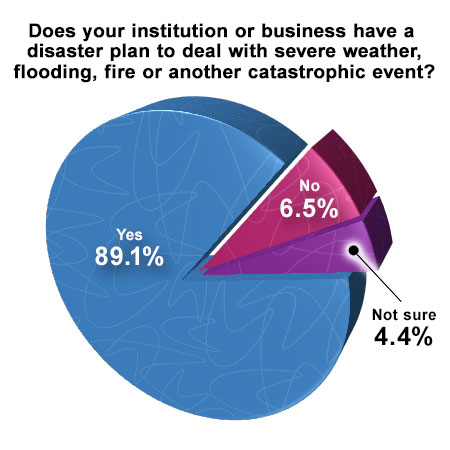 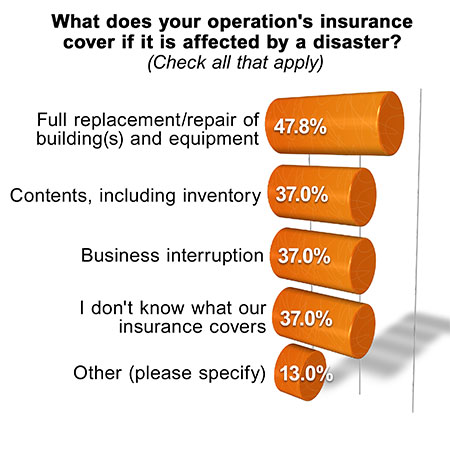 CHICAGO — The majority of laundry/linen managers who took this month’s American Laundry News’ Your Views survey believe that their business is prepared to deal with a catastrophic event, such as a fire or hurricane: 89.1% have a disaster plan in place, while 6.5% say they don’t have a plan. Roughly 4.4% aren’t sure if they have a plan in place or not.

Responses show that laundry/linen facilities can experience a variety of disasters:

It’s no surprise that most managers believe their staff is prepared to respond in the event of a disaster. About 45.7% of respondents said that their staff is “extremely prepared,” and 43.7% believe they are “somewhat prepared.”

“We had an equipment fire where staff efficiently and effectively minimized damage to property, successfully evacuated employees and enacted the contingency plan,” a respondent writes.

Roughly 4% said that staff is “neither prepared nor unprepared.” The remaining 6.5% responded that personnel are “somewhat unprepared.” No manager polled described staff as being “extremely unprepared.”

The staff preparedness illustrated by the survey results is borne out in the number of institutions and businesses that conduct drills related to severe weather or fire: almost 83% of respondents said that their organization conducts such drills.

“The insurance company even asked for a copy of the video for training purposes after our event because of the way staff immediately went into damage-control mode while remaining safe,” writes one respondent.

Still, 17.4% of managers answered that they do not conduct drills.

A large share of respondents reported that their business carries some sort of insurance as part of a disaster plan. Close to half (47.8%) said their insurance covers full replacement and/or repair of buildings and equipment.

Roughly 37% of respondents said their insurance covers both contents (including inventory) and business interruption.

“The loss we had was 100% supported by insurance to include cleanup, business interruption, additional business expense and brand-new equipment replacement,” a respondent comments.

Of the 13% who responded “other” in terms of insurance coverage, options listed included being self-insured, renting, and being a government facility.

Almost 37% of respondents reported they don’t know what their operation’s insurance covers in event of a disaster.

While the Your Views survey presents a snapshot of readers’ viewpoints at a particular moment, it should not be considered scientific; due to rounding, percentages may not add up to 100%.

Subscribers to American Laundry News e-mails are invited to take the industry survey anonymously online each month. All managers and administrators of institutional/OPL, cooperative, commercial and industrial laundries are encouraged to participate, as a greater number of responses will help to better define operator opinions and identify industry trends.