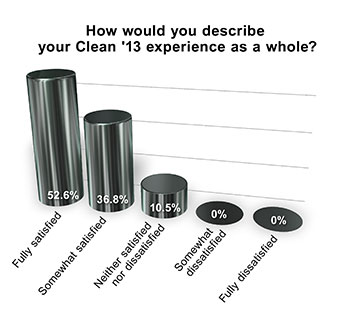 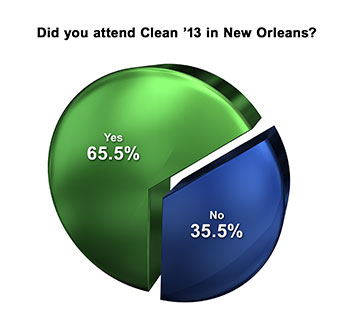 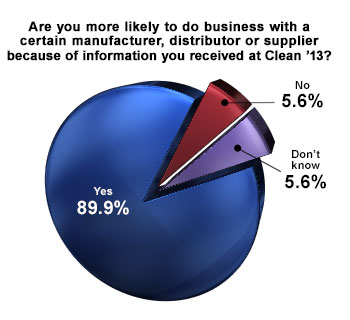 CHICAGO — Many of the laundry managers and textile rental operators who attended the Clean Show last month in New Orleans were, on some level, satisfied with their experience as a whole, according to this month’s American Laundry News Wire survey.

Nearly 53% were “fully satisfied” and 36.8% were “somewhat satisfied.” The remaining 10.5% of respondents were “neither satisfied nor dissatisfied.”

Among the survey’s respondents, 65.5% attended the event and 34.5% did not. The majority of those who did not attend cited budget constraints (60%). Another 40% couldn’t work it into their schedule. Though a small percentage were not able to attend the show personally, other staff members were able to make the trip (10%).

The show’s experimental three-day schedule produced a mixed bag of reactions. While a majority of respondents liked the new format, one wasn’t as receptive. “All three days did was cut out a busy day. The last day was dead, like the four-day shows.”

Among respondents, 94.7% attended the show’s first two days. The percentage dropped to 63.2% on the closing day.

In terms of exhibit categories, linen vendors and suppliers, bagging equipment, and flatwork folders were among the most sought-after, according to the survey. Nearly nine out of 10 respondents reported they are “more likely to do business with a certain manufacturer, distributor or supplier because of information (they) received at Clean ’13.”

Overall, many managers and operators left the show upbeat. “The staff was very helpful with directions and information,” writes one attendee. “(The show was) well organized, (and the) industry (was) well represented by both suppliers and buyers,” adds another.