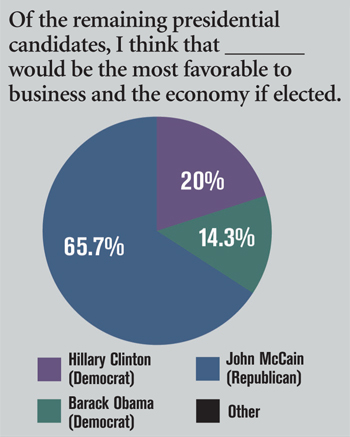 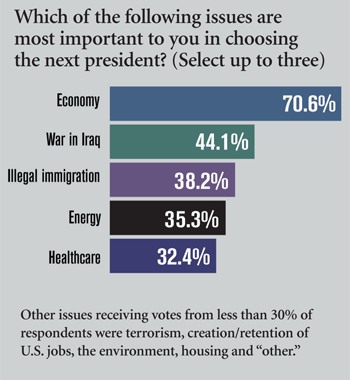 CHICAGO — Republican John McCain would be the most favorable to business and the economy if elected president, according to the majority of respondents who took April’s Wire survey.
McCain, the presumptive GOP nominee, received 65.7% of the vote, well ahead of Democrats Hillary Clinton (20%) and Barack Obama (14.3%), who are battling for their party’s nomination. There were no votes for a third-party candidate.
When respondents were asked for whom they would vote if the U.S. presidential election were held today, McCain garnered even greater support – 70.6%. Clinton and Obama each were selected by 14.7%.
The economy, at 70.6%, is overwhelmingly the most important issue for consideration in choosing the next president. Respondents were asked to select up to three. Other top issues are the war in Iraq (44.1%), illegal immigration (38.2%), energy (35.3%) and healthcare (32.4%).
Issues garnering less attention from respondents are terrorism (29.4%), the creation/retention of U.S. jobs (23.5%), the environment (20.6%) and the housing crisis (5.9%).
With the national price of gas at an all-time high, respondents were invited to report their local prices. A gallon of regular unleaded gas ranged in cost from $3.17 in Texas to $3.69 in Hawaii between April 7 and April 16, according to the survey. The range was actually a little larger – from $3.10 to $3.78 - but neither of the respondents who provided those extreme prices identified the states in which they are located.
Many respondents continue to absorb increasing fuel costs. Nearly 62% of respondents say they haven’t passed their operations’ added fuel costs to customers or end users in the past six months.
Subscribers to American Laundry News’ Wire e-mails — distributed weekly — are invited to participate in an industry survey each month. The survey is conducted online via a partner website. Each survey is developed so it can be completed in 10 minutes or less. Readers are encouraged to participate, as a greater number of responses will help to better define operator opinions and industry trends.
Click this LINK and follow the menu instructions to sign up for the free e-mail service.