CHICAGO — When it comes to goods, laundry and linen services need to know what’s happening with their product. That’s because textiles can far too easily go astray, leading to greater costs for operations.

So, laundry services have taken to using a variety of tracking options, according to a recent American Laundry News Your Views survey.

Almost 90% of respondents say that their operations make use of some type of tracking system for their linens.

The top two types of systems used? Piece count and weight, with both types utilized by nearly 52% of managers taking the survey. The next most used is radio-frequency identification (RFID) at 38%, followed by bar codes (31%) and labels (24%).

When asked why their companies use tracking systems, 75% of managers say it’s for inventory purposes, followed by eliminating waste at 64%. Almost 47% say they use tracking to assess productivity.

Other reasons given by respondents include, “Developing par levels” and “Projected order fill.”

One manager of a laundry/linen service that doesn’t use linen tracking methods says the company doesn’t because, “We’re one resort and we do in-house, so there’s no need.”

Another says it’s because, “We’re a COG laundry.”

When asked, “If you process customer-owned goods (COG), do any of those customers use tracking methods,” nearly 47% say yes, while 23% say no. Just over 3% didn’t know if their customers use linen tracking, and almost 27% of respondents don’t process COG.

For COG laundries whose customers do use tracking, the systems used mirror those of laundry operations with weight (53%) and piece counts (47%) leading the way. These were followed by RFID (33%) and labels (20%).

Unlike the laundry results, no COG customers use bar codes, according to respondents.

One survey taker did say that it has a customer that uses a manual tracking form to keep an eye on its linens.

When asked if, in general, the tracking of goods has increased or decreased over the past five years, almost 65% of respondents say it has increased. Nearly 23% say tracking levels have remained the same, while no survey taker sees a decrease in tracking. Almost 13% are unsure of tracking levels in the industry.

Technology and automation have seen major leaps in the laundry industry, so RFID tracking has been getting a lot of press. However, when asked if the use of RFID has increased or decreased over the past five years, more than 46% of respondents didn’t know.

Another 46% say the use of RFID tracking has increased, while 7% indicate it has remained the same. No survey takers say RFID tracking levels have decreased.

When asked the value for a laundry/linen service to use RFID tracking, 46% of respondents say “very valuable,” followed by “somewhat valuable” at 31%.

Almost 20% if survey takers say laundry use of RFID is “not really valuable,” followed by “not valuable at all” at almost 4% of respondents.

Of those who express a lower impression of RFID value, reasons centered on reliability and usability: 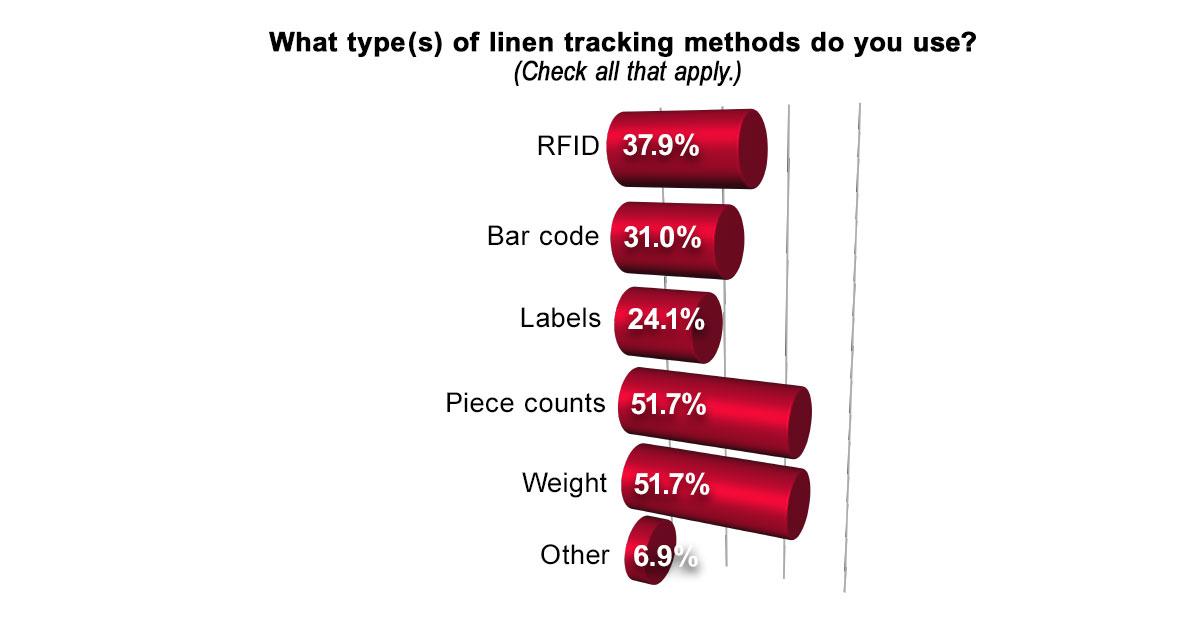