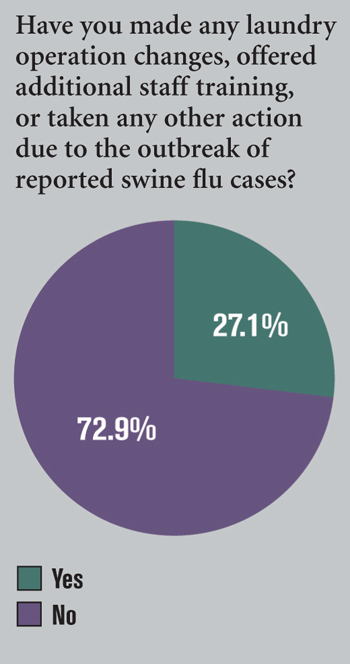 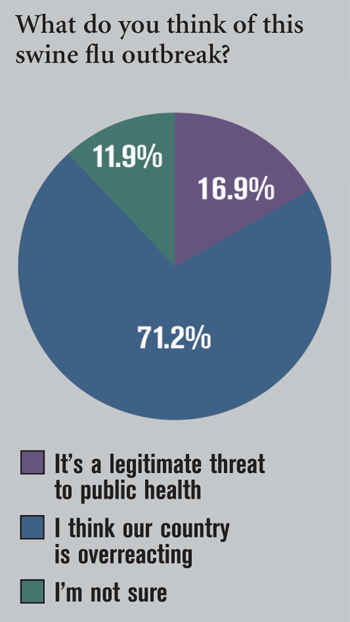 CHICAGO — Reports of a possible H1N1 (swine) flu outbreak and pandemic spilled from U.S. media outlets virtually non-stop in late April and early May, and some schools and other institutions took the precaution of closing for short periods after some flu cases were reported. In the midst of this, American Laundry News asked its Wire e-mail subscribers what they thought about the threat.
Approximately 17% of respondents to our unscientific survey said the flu outbreak posed a legitimate threat to public health, but 71.2% said they thought the United States was overreacting. The remaining 11.9% were unsure.
Whatever their feelings, 27.1% reported making laundry operation changes, offering additional staff training, or taking other action due to the outbreak of reported cases. The remaining 72.9% took no action.
Those who did act took varying approaches, from being hands-on to being more passive — posting information flyers to raise awareness. Some of the hands-on practices included:

Only 18.6% of respondents said their laundry management staff had been contacted by an end-user or customer with questions or concerns related to swine flu.
Nearly 63% of respondents said their business or institution has a formal pandemic response plan in place. Twenty-seven percent said they don’t have a plan, and 10.2% of respondents aren’t sure.
Finally, respondents were asked to estimate their personal risk of acquiring swine flu, using a scale from 1 (highly unlikely) to 10 (highly likely). Roughly 73% estimated their chance as being 3 or less. Roughly 12% estimated it to be 8 or greater.
While the American Laundry News Wire survey presents a snapshot of readers’ viewpoints at a particular moment, it should not be considered scientific.
Subscribers to American Laundry News’ Wire e-mails — distributed weekly — are invited to participate in an industry survey each month. The survey is conducted online via a partner website. Each survey is developed so it can be completed in 10 minutes or less. Readers are encouraged to participate, as a greater number of responses will help to better define operator opinions and industry trends.
Click here and follow the menu instructions to sign up for the free e-mail service.