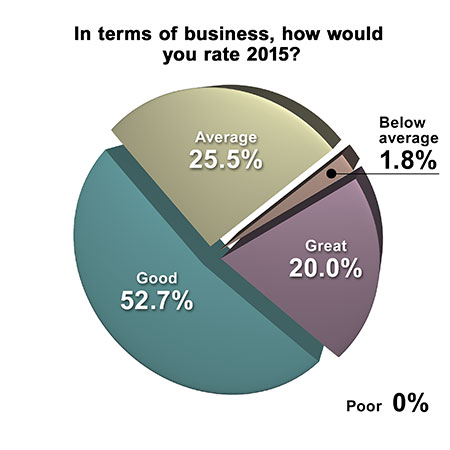 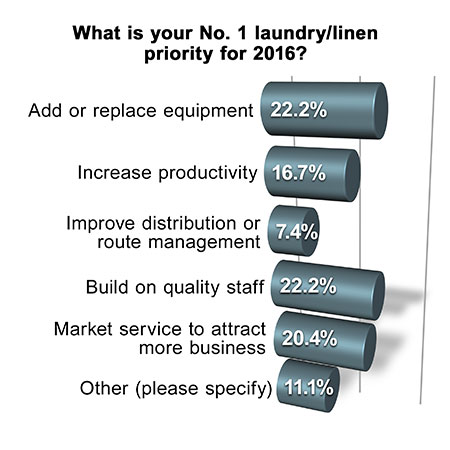 Majority of respondents indicate year’s performance turned out as expected

CHICAGO — When asked to rate their company’s business in 2015, the majority of managers who took American Laundry News’ most recent Your Views survey rated the year as either “good” or “great.”

And 2016 also looks good to respondents in terms of achieving priorities.

One respondent writes, “We are growing.”

When asked to rate their business in 2015, almost 53% of respondents answered that the year was “good,” while 20% said business was “great.”

What made 2015 a good year for the majority of laundry managers who took the survey? There were many events that were the “best” of the year.

Some had success with upgrades.

“We re-lamped the entire plant with incentive money from others,” writes one respondent.

One respondent had it particularly good when it came to equipment: “Upgrades and new installations were completed without any glitches.”

“By changing our shifts—going from five, eight-hour shifts to four 10s, we have been better able to manage our sometimes volatile volumes,” a respondent writes. “By changing our hours of operation, we have more overlap staff, which has also helped to facilitate the surges that we often experience.”

Other survey takers cited employees for being “the best thing that happened” to their laundry/linen operation.

“Our personnel was excellent in handling problems and working with our suppliers,” a respondent writes.

Another adds, “I was blessed with good workers, and experiments were tried and proved to be beneficial.”

Of course, sales and business improvements made the highlight reel for some laundry managers.

“Through sales efforts, we were able to add a few new high-volume customers,” writes a respondent.

The majority of those who took the survey (74.6%) expected the year to turn out like it did; for 21.8%, the year didn’t meet expectations.

Of course, not everything went according to plan (or well) in 2015. Those who took the survey offered a list of “worsts” for the year. These included:

Only 1.8% of respondents said their companies didn’t set any goals for the year. No survey taker indicated, “We didn’t accomplish any of our goals.”

When it comes to goals, a majority of respondents indicated that there is a decent chance that their laundries will accomplish their No. 1 priorities for 2016.

Almost 67% indicated that “there is a good chance” the laundries will reach that priority. The share of managers who gave a 50-50 chance to achieve those goals was 31.5%.

What are those No. 1 priorities? Answers were fairly even in several categories. Both answers of “add or replace equipment” and “build on quality staff” garnered 22.2% of responses. Following closely was “market service to attract more business” at 20.4%.

Close to 17% of respondents are looking to “increase productivity,” and 7.4% want to “improve distribution or route management.”

More than 11% chose the “other” category, offering a variety of different priorities for 2016.

“Increase awareness of the importance of innovative, reliable and accurate chemical dispensing systems,” writes a respondent.

“Train others for jobs in the laundry industry,” another writes.

One survey taker has a more specific priority in mind: “Add additional capacity, equipment and space.”

Subscribers to American Laundry News e-mails are invited to take the industry survey anonymously online. All managers and administrators of institutional/OPL, cooperative, commercial and industrial laundries are encouraged to participate, as a greater number of responses will help to better define operator opinions and identify industry trends.