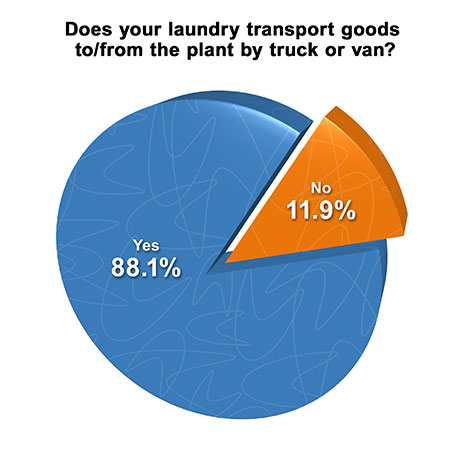 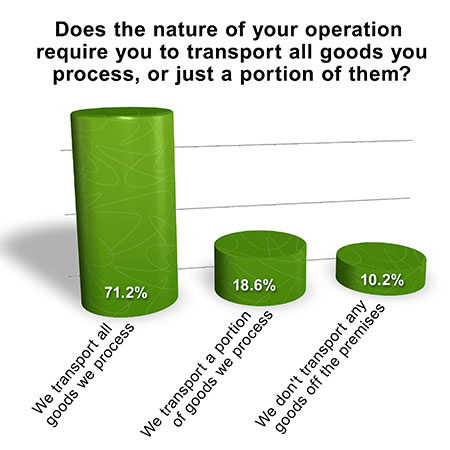 CHICAGO — Many laundry/linen operators are on the move, as 88.1% of industry managers polled say their laundry transports goods to/from the plant by truck or van, according to results from this month’s American Laundry News Your Views survey. Just 11.9% of respondents do not transport laundry/linen to/from their facility.

Roughly 10% of respondents do not transport any goods they process off their premises.

When it comes to their fleet of trucks/vans, some operators transport the goods they process with just one van, while others deliver their laundry/linen with larger vehicles.

“Basically we have airport shuttles,” one says, while another operator explains that his/her facility utilizes a fleet of nine tractor-trailers and two straight trucks.

While some only spend $400 a month to fuel their vehicles, others spend as much as $45,000 on diesel fuel for their trucks.

Even in the face of rising fuel costs, 93.2% of laundry/linen operators say they do not utilize alternative-fuel or hybrid electric delivery vehicles for their operation, while only 6.8% say they operate such vehicles.

And in terms of whether they plan on buying or leasing alternative-fuel or hybrid electric delivery vehicles within the next year, 77.6% say they have no such plans, while 19% say there is a possibility. Only a sliver of respondents (3.4%) say they are interested in making such an investment.

One operator has taken a different approach in an attempt to lower his/her operation’s fuel costs. “We installed a bulk diesel tank last year and began fueling our fleet on-site. We realized a 20% savings to fuel cost.”

“We rerouted our delivery schedules and are reducing the delivery frequency from seven and six days per week, to six and five [days],” one says.

“New vehicles use more diesel fuel than older vehicles,” explains another operator. “This is due to all of the added emission features that are now required on newer trucks. We have modified routes in an effort to drive less miles.”