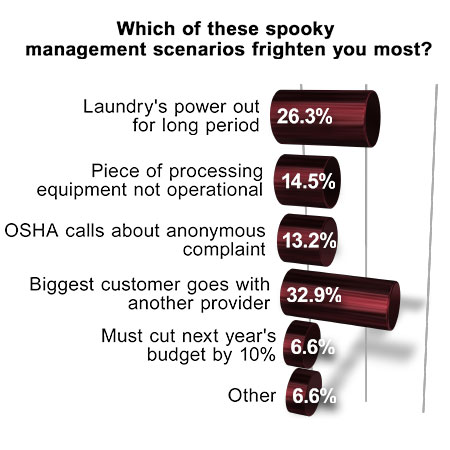 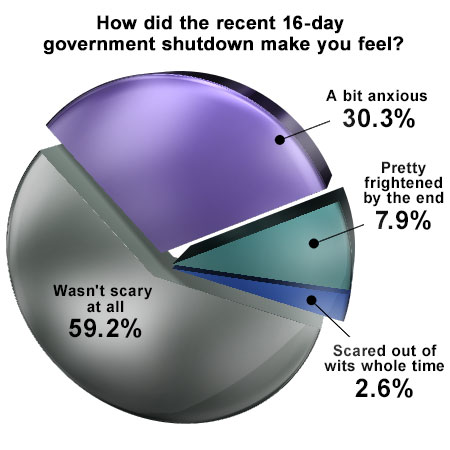 CHICAGO — Laundry managers weighed in on “spooky” management scenarios in this month’s American Laundry News Your Views survey, with the majority (32.9%) saying they are most frightened by the prospect of their biggest customer deciding to go with another textile care provider.

Others were more frightened by “[their] laundry’s electricity [going] out for a long period of time” (26.3%); “a key piece of processing equipment is not operational” (14.5%); or “OSHA [calling] after receiving an anonymous complaint” (13.2%).

Equal shares of 6.6% say their supervisor directing them to cut next year’s budget by 10%, or “other” types of scenarios, such as a fire occurring at their facility, are the most frightening.

Some managers have already faced these scenarios at their laundry.

“[A] hurricane took out electricity for 72 hours and blocked roads with trees,” one says.

“[We lost] a customer to another company that does not do as good a job as us, and costs more, due to the ignorance of the customer’s knowledge,” says another.

A third manager says, “We had someone fake an injury and try to sue for worker’s [compensation].”

The majority of laundry managers say the recent government shutdown “wasn’t scary at all” (59.2%), while roughly 30% did admit to feeling a “bit anxious” about it. Small shares were “pretty frightened by the end” (7.9%), while some were even “scared out of [their] wits the whole time” (2.6%).

While many managers say they were not directly affected by the shutdown, some were.

“We had government accounts that were closed [that] we could not service and … charge for, so we had a loss of revenue,” says one respondent.

“We have government contracts and it slowed the checks up, but we managed,” says another.

Overall, the laundry managers polled were displeased by how the shutdown was handled.

“In my honest opinion, Congress caved [and] gave up their bargaining chips,” says one respondent. “They should have stood their ground. Are they any more loved by the ‘other side’ because they surrendered? No, but their supporters were sorely disappointed.”

“[The shutdown] never should have happened,” says another. “If a business was ran the way the government is being ran, the business would never make it. They need to get a clue and start actually thinking about the good of the country and all of the people in it.”