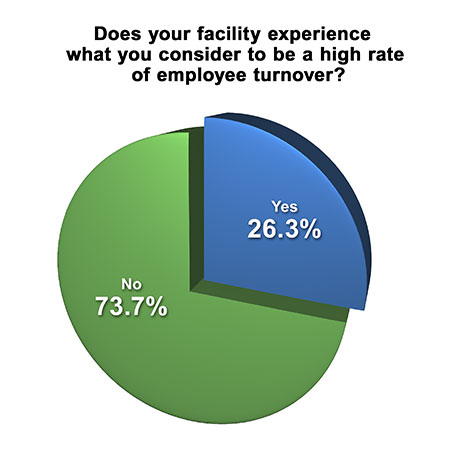 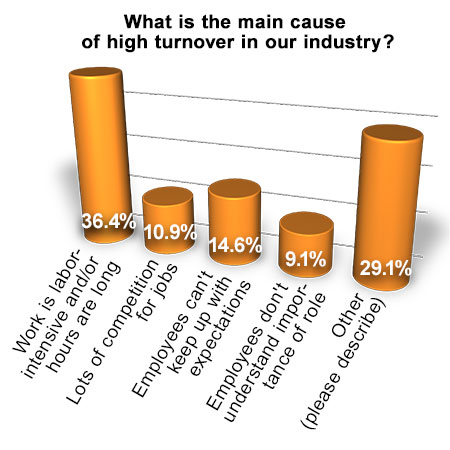 CHICAGO—The majority of laundry and linen managers polled in this month’s American Laundry News Your Views survey—almost 75%—say they don’t deal with what they consider a high rate of employee turnover.

In cases where high turnover exists, respondents list a range of positions that are vacated frequently, with the most common being soil-sort employees, drivers and production employees. Others point to part-time, seasonal and new employees as the most likely to leave after a short period, in addition to sales, housekeeping and engineering staff.

But what are the main reasons for high turnover in the industry? More than 35% attribute it to the nature of the work, which can be labor-intensive with long working hours. Other respondents mention stiff competition for jobs (10.9%) and employees’ inability to keep up with what is expected of them (14.6%). Around 9% say employees simply don’t understand the importance of their role. Nearly 30% list “other” causes, including low wages, the lure of full-time positions elsewhere, and behavioral issues.

“This is just another job to most applicants,” one respondent comments. “There is really no way to recruit, so we must make every effort to train the new workers to be successful.”

Keeping staff members happy is an “extremely important” undertaking, according to more than 70% of respondents. A little more than a quarter of respondents believe it’s “somewhat important” to consider employees’ satisfaction in their positions, and small shares (1.8% in both cases) are either neutral on the issue or believe that keeping staff happy is not a high priority.

“I think a favorable relationship between an employee and their direct manager is essential to general morale and helping to control turnover,” says one operator.

Retaining employees involves a number of approaches, according to 75% of operators polled: recognizing employee accomplishments; compensating fairly; communicating expectations more effectively; and providing advancement opportunities. Small shares point to just one of the actions named above, and others list suggestions of their own.

“Treat employees well, pitch in when needed, listen to their input, walk a mile in their shoes,” says one operator.

“Have good, working equipment so that they have the tools to do their jobs,” says another.

When there are frequent fluctuations in staff, an operation runs less efficiently, costing both time and money, according to almost half of those polled. Time and energy lost in trying to find replacements is the primary consequence of high turnover for about 22% of respondents.

Others mention the challenge of keeping employees up to speed on operational requirements (12.7%), a weaker effort toward building teamwork and camaraderie (9.1%), and the tendency for less experienced workers to make more mistakes (1.8%). One respondent among the 5.5% who point to “other” consequences cites the increased workload on remaining staff as a negative result of high turnover.

“Let’s face it—the laundry business is not glamorous or romantic,” says one respondent, adding, “It is a good business, and it has been good to me for many years.”

While the Your Views survey presents a snapshot of readers’ viewpoints at a particular moment, it should not be considered scientific. Subscribers to American Laundry News e-mails are invited to take the industry survey anonymously online each month. Due to rounding, percentages may not add up to 100%.

All managers and administrators of institutional/OPL, cooperative, commercial and industrial laundries are encouraged to participate, as a greater number of responses will help to better define operator opinions and industry trends.