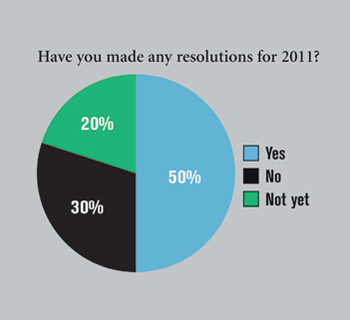 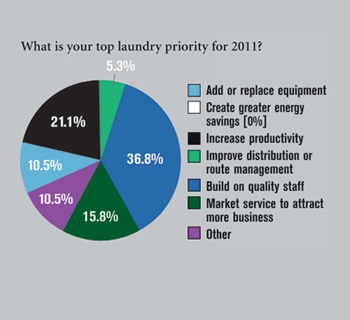 CHICAGO — The beginning of a new year offers us a clean slate, a fresh opportunity to set goals. Making a New Year’s resolution is a common tradition, and half of the respondents to January’s Wire survey say they have made resolutions for 2011 and another 20% are thinking about it.
So, what is their top laundry priority this year? Building on quality staff was the No. 1 choice, selected by 36.8%, with increasing productivity next (21.1%). Approximately 16% of respondents say marketing their service to attract more business is their top priority; equal portions (10.5%) point to adding or replacing equipment, or “other.”
Improving distribution or route management (5.3%) was a less-popular choice, and creating greater energy savings (0%) drew no votes.
Their top personal priority for 2011 is a little clearer — 55% of respondents want to lead a healthier lifestyle. Spending more time with family, and spending money wisely/saving more each garnered 20% of responses. The one respondent who selected “other” wants to “Make a new system work for a new customer.”
Many of those who took the Wire survey are confident they will accomplish both of their top priorities. Roughly 32% have no doubt they will succeed, and another 58% believe “there is a good chance.” Roughly 11% put their chances at 50-50.
Seventy-five percent of respondents reported accomplishing some of their 2010 goals, and another 20% reported accomplishing every goal. The remaining 5% said they didn’t set any goals.
What was the best thing that happened to their operation in 2010? Increasing poundage or gaining new business was a common theme, but there were some more specific accomplishments: developing and implementing a new uniform line, paying off long-term debt, hiring two talented mechanics, directing the contractor to sort soiled linen off-property, and receiving funding for two new dryers were some of the highlights.
But with the good also comes the bad. Some of the worst things that happened to respondents’ operations in 2010 were having to wait a year to officially replace a supervisor, suffering a heavy financial loss due to the bankruptcy of a large customer, the contracting of laundry services to a “less quality-conscious” provider, and the unexpected, non-work-related death of an employee.
Subscribers to American Laundry News’ Wire e-mails—distributed twice weekly—are invited to participate anonymously in a brief industry survey each month. While it presents a snapshot of readers’ viewpoints at a particular moment, the survey should not be considered scientific.
The entire American Laundry News audience is encouraged to participate, as a greater number of responses will help to better define operator opinions and industry trends.
Click here and follow the menu instructions to sign up for the free e-mail service.