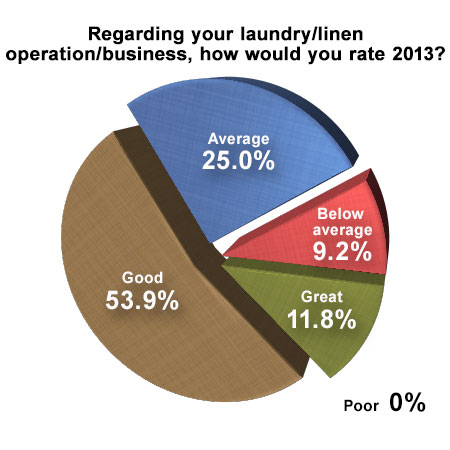 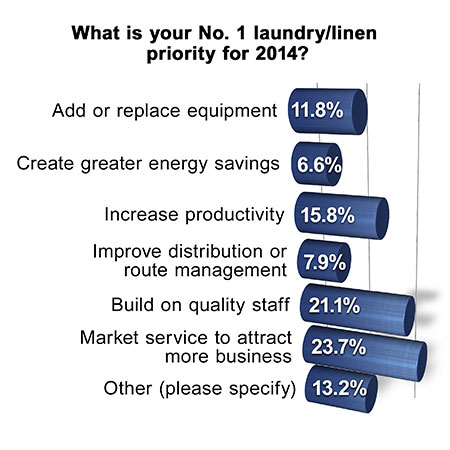 CHICAGO — More than half of laundry/linen operators polled say 2013 was a “good” year for their operation/business (53.9%), according to this month’s American Laundry News Your Views survey.

Regardless of their rating, the majority of respondents (82.9%) say the past year turned out as they expected for their operation/business, while 14.5% say it wasn’t what they expected. Only 2.6% were undecided.

Roughly 67% of respondents say they were able to accomplish “some” of their 2013 goals, while 27.6% say they accomplished “all” of their goals. Equal shares of 2.6% say they either “didn’t accomplish any” goals, or set no goals at all.

“Our volume remained high, and the production was high and climbing all year,” says one operator, regarding the best thing that happened to his/her operation/business in 2013.

While some operators were able to build a new facility, others listed operational improvements, such as trimming utility expenses and boosting employee morale, as the best thing that happened to their business last year.

In terms of the “worst” thing to happen, one operator says, “Mechanical breakdowns are always scary, and we had some interruptions.”

“Besides reduced poundage, we lost a few longtime clients to unfair competition,” says another. “Certain EVS companies are expanding into the laundry business. … They have an unfair advantage of seeing our pricing, and then having the opportunity to offer lower pricing just to get the business.”

Another 13.2% of respondents listed other business goals, such as “[increasing] quality of final product,” adding capacity/expanding their facility, or reducing cost.