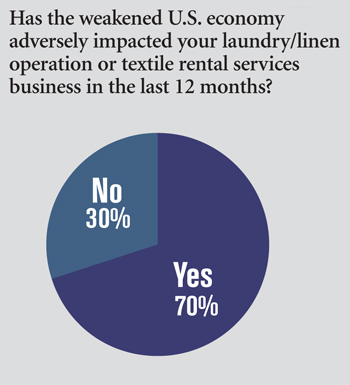 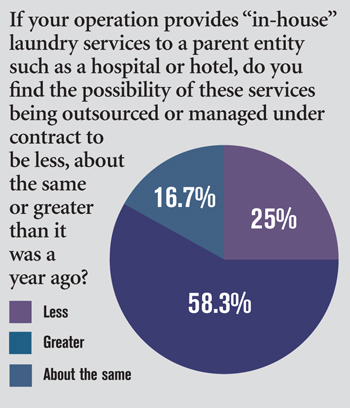 CHICAGO — Whether you believe the United States is in recession or not, there are many signs of economic weakening. A sizable majority of respondents to this month’s Wire survey say the sluggish U.S. economy has adversely impacted their laundry/linen operation or textile rental services business in the last 12 months.
Amid rising consumer prices, a housing crisis and high unemployment rates, 70% of respondents say they’ve felt the impact. For a delivery-based industry, it’s not surprising that many are blaming the record crude-oil prices for higher fuel costs and, by extension, higher costs for supplies such as chemicals and even textiles.
Some respondents, particularly those in healthcare, say their laundry volume has increased during this period. “As people fear losing their jobs, (they) will often have minor surgeries done now rather than risk having to do it after they have been laid off,” writes one respondent.
Some hospitality-based launderers shared a grim outlook. “With the hotel and casino business doing poorly, our pounds have not been that great,” reports a reader. “We were hoping that with the summer coming, it would pick up, but now with the price of gas, it looks bad.” Another says there’s been a noticeable drop in vacation travelers.
A positive effect has been a better pool of job applicants from which to choose.
“We are, however, having employees change attitude about how much they value their current job and are finding better applicants,” one respondent says.
One-quarter of respondents say a budgeted position has been eliminated or an employee terminated in the past 12 months solely due to cost-cutting reasons.
The economy hasn’t seemed to impact the job security of most respondents. They were asked to rank their sense of security on a 1-to-10 scale, with 1 being “least secure” and 10 being “absolutely secure.” Ninety percent ranked it as an 8 or higher. Five percent ranked it a 6, and another 5% ranked it a 7.
For those whose operations provide “in-house” laundry services to a parent entity such as a hospital or hotel, the possibility of these services being outsourced or managed under contract is always there. But, in these poor economic times, is the possibility less, about the same or greater? Roughly 17% say they believe it’s greater than a year ago, while 58.3% say it’s about the same and 25% say it’s less.
Only about 16% of respondents say their institution or business has taken advantage of lower interest rates or other financial incentives in the past 12 months to buy new equipment or make other plant improvements. American Laundry News asked respondents how they planned to use their “economic stimulus payments” coming from the government. More than half indicated they intend to pay bills and/or save it. About a quarter say they plan to spend it on purchases. “Probably will buy something we don’t need,” wrote one person.
This magazine hopes one reader was only responding tongue-in-cheek when he said the money would be used to “buy bullets.”
Subscribers to American Laundry News’ Wire e-mails — distributed weekly — are invited to participate in an industry survey each month. The survey is conducted online via a partner website. Each survey is developed so it can be completed in 10 minutes or less. Readers are encouraged to participate, as a greater number of responses will help to better define operator opinions and industry trends.
Click this LINK and follow the menu instructions to sign up for the free e-mail service.