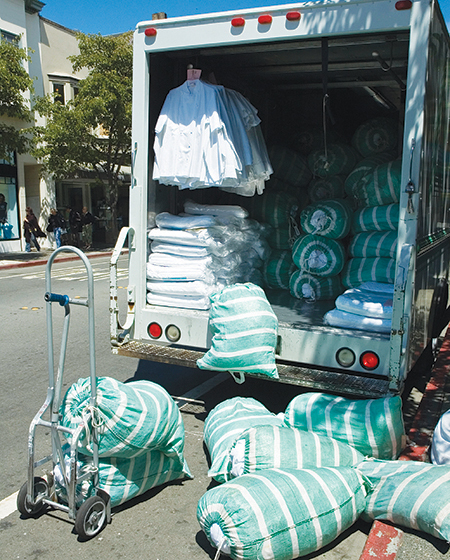 CHICAGO — Route operations is an important function of any successful rental or commercial laundry and requires constant attention.

The Textile Rental Services Association (TRSA) says the textile services industry deploys a combined fleet of 25,000 trucks weekly to deliver goods to thousands of healthcare and hospitality facilities, and to businesses such as restaurants, auto repair shops, and others.

TRSA calculates that 1.8 million U.S. business locations are textile services customers generating roughly 15 billion pounds of laundry per year delivered by the third largest fleet of vehicles (behind only FedEx and UPS).

Efficient delivery of clean goods and pickup of soiled goods is what separates one textile service operation from the next.

Route optimization can help companies eliminate routes and potentially reduce their costs by thousands of dollars per route. Ask yourself: Do your drivers stop where it is most cost-effective for your organization, or do they stop where they want to stop and that’s efficient for them?

It isn’t enough to use index cards or pushpins and colored string to map out this week’s routes, she says. There’s a variety of routing software products on the market that can provide as much or as little planning help as is desired.

The traditional approach of focusing on daily, tactical route planning leads to what Brandt calls “reactive” planning, which can find a operator tweaking their routes due to volume fluctuations, making off-day deliveries and pickups, and even adding vehicles when capacity falls short, all of which create added costs and headaches.

She favors a more proactive approach, even using more than one route scheduling method to gain the greatest business advantage. Keys to best practices are to plan a transportation strategy, collect data in support of your strategy, analyze that data regularly and then implement changes based on your analysis, she says.

It’s critical for both drivers and your sales force to embrace your transportation strategy, because either can short-circuit your attempts to get things headed in the right direction.

Global positioning system (GPS) technology can “follow” any vehicle that carries the GPS unit under the hood. During another TRSA event, attendees watched a large screen as icons representing buses moved from point to point along a map of Jersey City, N.J. Scrolling over one of the icons immediately popped up a smaller screen that identified the vehicle, the driver, the speed of the vehicle and its location.

Such data is useful in tracking a driver’s progress (is he on time or does he seem to be stalled?) as well as help prevent theft and misuse of company vehicles.

With so many textile service trucks and step vans on our nation’s highways every day, fleet safety has to be a priority.

For example, Cintas Corp. has used telematics to reduce the number of vehicle incidents that its drivers experience. The company initially installed inthinc’s telematics technology in 1,200 vehicles in its Uniform Rental division.

“The system uses state-of-the-art technology to influence driving behaviors and reduce risk in a real-time environment,” says Rick Gerlach, director of safety at Cintas. “But the most important benefit of the technology is that it not only allows us to identify drivers who could benefit from some additional safety training at the wheel, but also provides an opportunity for Cintas to recognize and reward our drivers who make safety a core value at all times.”

Cintas reduced its number of speeding events by 85% and increased seat belt use by 89% within one year of implementation, the company says. Overall, it translates to a 46% decrease in vehicle incidents.

It costs a great deal of money to keep their fleets on the road, so fuel efficiency is always on the mind of an operator managing a delivery fleet. G&K Services, Mission Linen Supply and Bates Troy Healthcare Linen Services are among the textile rental companies that have explored using alternative-fuel vehicles.

In California, G&K Services is testing diesel electric hybrid step vans to assess the potential of replacing standard diesel trucks, where feasible, to increase fuel efficiency. “G&K is focused both on maximizing the fuel economy of our delivery fleet and being good stewards of the environment,” says Dick Stutz, G&K’s senior vice president of operations.

CNG was one of several alternative fuels that Mission Linen considered as it was seeking to increase its commitment to sustainability. It favored CNG’s reduced impact as compared to the threat caused by disposal of batteries used in hybrid applications.

“Since we depend on trucks to conduct our business, we are committed to finding ways to increase fuel efficiency while reducing our carbon footprint,” says Don Bock, director of risk management. “We’re thrilled that we can have a positive impact on the environment and save money, making the case for other companies in our industry to follow suit.”

Bates Troy Healthcare Linen Services has used a test truck powered by a HybriDrive® parallel propulsion system in its healthcare linen service deliveries and pickups. The electric-hybrid propulsion system complements BAE Systems’ HybriDrive series system. It was designed to respond to the specific needs of the heavy-duty vocational truck market.