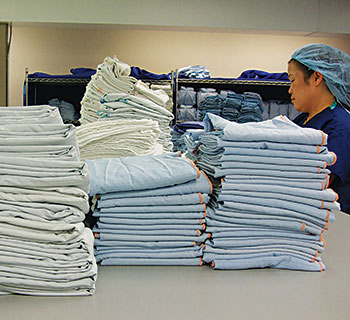 How education is increasing use of reusable surgical textiles

MISSION, Kan. — Since the 1960s, when disposable products first appeared in hospitals, the textile services industry has fought a largely losing battle against disposables for market share. As a result, many healthcare professionals have only known single-use disposable items in the operating room (OR).

However, the current focus on sustainability, combined with education, is starting to make a difference in how healthcare professionals view reusable textiles. For example, several healthcare groups have recommended that member hospitals increase their use of reusable textiles in order to minimize waste and its associated disposal costs. And the textile services industry now has life-cycle analyses and case studies that support reusable textiles as the environmentally preferable choice over single-use disposable items.

The American Reusable Textile Association (ARTA) recently conducted its second webinar for Practice Greenhealth on the benefits of reusable surgical textiles. The information from that webinar and other ARTA resources is presented here for the consideration of suppliers and laundry operators.

THE PROBLEM OF DISPOSABLE WASTE: MAKING THE CASE FOR REUSABLES

“The culture of waste in the OR is driven in large part by the increasing volume of disposable medical supplies on the market today. Many hospitals — after jumping on the disposables bandwagon — are beginning to rethink the use of reusable textiles and supplies in the OR. Reusable surgical textiles are demonstrating increased clinician satisfaction while also providing comparable barrier protection. And reusable table and mayo stand covers, surgical towels and basins are common-sense switches that drive down costs by reducing the volume of waste generated.”

According to a survey of its 114 member hospitals, Practice Greenhealth finds that U.S. hospital patients generate about 33.8 pounds of waste each day. As of 2008, there were 951,045 staffed hospital beds in the States, according to the American Hospital Association. Therefore, it can conservatively be calculated that U.S. hospitals produce nearly 6 million tons of garbage each year.

In addition, 78% of hospitals designate medical waste as infectious; 53% of medical waste is comprised of single-use disposable items 1; and the biggest source of medical refuse — the operating room — churns out roughly 20-30% of a hospital’s waste.

The Association of periOperative Registered Nurses (AORN) agrees in an article featured in its journal that states, “using reusable products provides a means to decrease regulated medical waste generated in the OR by an average of 65%, as well as reduce the cost of waste disposal. AORN recommends that the standard percentage of regulated medical waste in healthcare facilities should be 15% or less of overall waste. However, researchers have found that many facilities dispose up to 70% of waste as regulated medical waste … In an effort to reduce the waste stream, AORN recommends evaluating the environmental impact of reusable, reposable, and disposable products.” 2